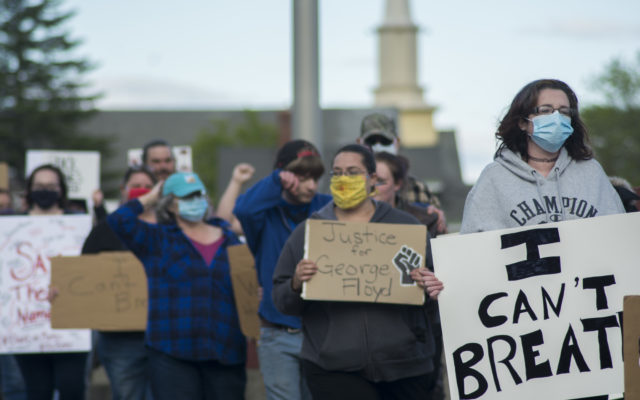 CARIBOU, Maine — Nearly 40 people protested peacefully Monday evening in Caribou against the killing of George Floyd by Minneapolis police. There were no conflicts or confrontations as the group advocated for justice in Floyd’s death during the two-hour event, and for systemic change within the institution that allowed these deaths to occur. 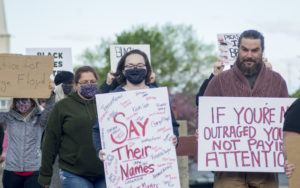 Protesters march down Herschel Street in Caribou on June 1 as part of a movement in response to the murder of George Floyd. (Chris Bouchard | Aroostook Republican)

The Caribou protest was not the first held in Aroostook County. A protest organized by Otis Edgecomb was held May 30 in Presque Isle.

Caleb Schwartz, lead coordinator for the Caribou protest, said he was inspired by Edgecomb to bring a similar event to Caribou.

Schwartz hopes that people in the area will see that no matter how small their community is, their voices will be heard, he said.

“We’re taught in school that history repeats itself,” he said. “The reason why we teach the holocaust is because we don’t want history to repeat itself. And by being here, together today, we’re doing our small part to make sure history doesn’t repeat itself.”

The group met at the Caribou Public Library parking lot, and marched down Herschel Street and around to the Caribou Police Station, then to the end of High Street before looping back to the library, where the protest continued on the grass adjacent to the intersection of High and Main streets. 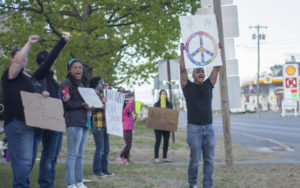 Otis Edgecomb, who led the first protest in Aroostook County in response to George Floyd’s death over the weekend, is pictured here holding a peace sign outside the Caribou Public Library during a June 1 protest. (Chris Bouchard | Aroostook Republican)

Edgecomb in a speech outside the library before the march began described the current state of America as simultaneously terrifying, beautiful, heartbreaking, heartwarming, confusing, sad, and, most importantly, needed.

“We are here to march in memory of and for the eventual justice of George Floyd who was murdered just south of Minneapolis, Minnesota, while being detained by four officers,” Edgecomb said in a speech outside the library before the march. “I thank all of you who found the courage and empathy in your heart to get out of your comfort zone and join us here today.”

The enemy is not law enforcement, Democrats, Republicans, protesters, or the people who support Democratic presidential candidate Joseph Biden or Republican President Donald Trump, he said.

“The enemy is hate,” he said. “The enemy is injustice. The enemy is not speaking up and supporting each other to enact these systemic changes that must be done.” 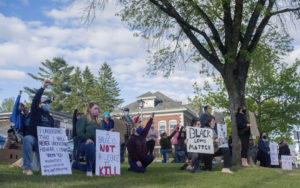 Protesters gathered at the Caribou Public Library, across the street from the municipal building and police station, on June 1 for a protest in response to the murder of George Floyd. (Chris Bouchard | Aroostook Republican)

The marching protesters were met with a positive response from onlookers and people in their vehicles, with only a couple making mocking remarks and squealing their tires to drown out protesters’ chanting.

Edgecomb said the Presque Isle march was the first protest he’d ever led, and that he was motivated after watching the video of officer Derek Chauvin killing Floyd by placing his knee on his neck for nearly nine minutes as he pleaded for his life.

“I couldn’t get through it,’ he said. “I started bawling and crying, and each time I watched it, it got harder and harder. I just thought that this could’ve been my brother or my son. It could’ve been anyone.”

Future protests will be held in Presque Isle on Saturdays at the Aroostook Center Mall parking at 9 a.m., Edgecomb said.