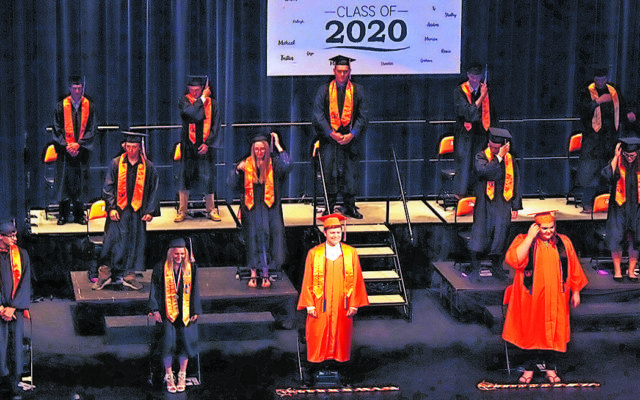 Melissa Lizotte • June 16, 2020
For Ashland District School’s Class of 2020, celebrating their graduation was equal parts compromise, due to the COVID-19 pandemic, and an emotional farewell to the teachers and classmates that shaped their 14 years of pre-K to high school education.

ASHLAND, Maine — For Ashland District School’s Class of 2020, celebrating their graduation was equal parts compromise, due to the COVID-19 pandemic, and an emotional farewell to the teachers and classmates that shaped their 14 years of pre-K to high school education.

After learning of Maine Department of Education social distance guidelines, the SAD 32 school board chose to host two graduation ceremonies on Sunday, June 14 — one in the morning and another in the afternoon and both held in the auditorium. Parents and relatives for half the class attended the morning ceremony while those of the second half came in the afternoon.

The 15 graduates sat six feet apart onstage and instead of shaking hands with Superintendent Gehrig Johnson, they each received their diploma from him, posed for a photograph and then took their seat.

But while reflecting on her childhood and adolescent years in Ashland, salutatorian Haleigh Holmes briefly acknowledged the challenges of the pandemic before moving on to the more positive memories of growing up with her Ashland classmates.

She spoke fondly of taking part in middle and high school band and chorus and Future Farmers of America and thanked the teachers who have inspired her.

Most of all, Holmes said that she wanted to thank her family and classmates for giving her the strength to embark into an uncertain and ever-changing world.

“I’ve lived in Buffalo my entire life and I didn’t know many neighborhood kids until I came to Ashland,” Holmes said, referring to a local nickname for the town of Portage Lake. “Today is our day, a day where we celebrate our wonderful memories and accomplishments.”

Valedictorian Graham Berry began his speech by recalling a ski trip in which he had to literally pick himself up after falling and persevere back up the trail. He gave more famous examples of people who have overcome major obstacles to success, including Walt Disney, Maine horror author Stephen King and Microsoft founder Bill Gates.

His own class has faced the setbacks involved with learning from home during their last few months of school and now must deal with uncertainty regarding the format of their college classes. But Berry encouraged his fellow graduates to remain hopeful.

“Setbacks don’t define who we are. If anyone here had given up on themselves, they wouldn’t be here today,” Berry said.

Before the seniors received their diplomas, Principal Joel Hall announced the graduates who are receiving scholarships toward their college education. The scholarships, which came from organizations in Ashland and surrounding communities, totaled more than $130,000.

Just when we thought we were out of the woods with kitten season, it has hit full force.  The past few days have been difficult answering the phone and hearing the stories of why people have litters of kittens they need to surrender.
Campaign Corner END_OF_DOCUMENT_TOKEN_TO_BE_REPLACED