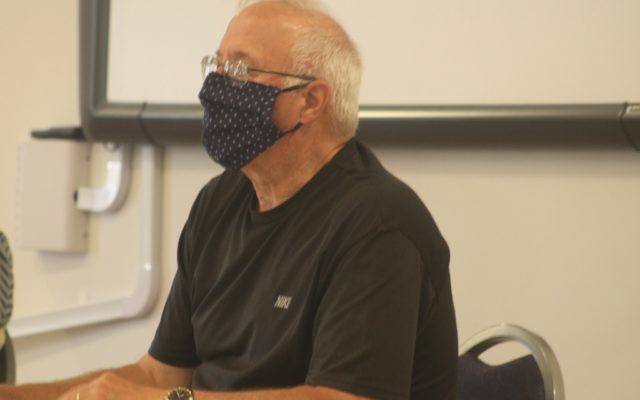 Rosemary Lausier • June 16, 2020
WESTFIELD, Maine -- For the small Central Aroostook town of Westfield, canceling its meeting was hardly an option -- it had a budget to pass and an important revaluation plan to approve.

WESTFIELD, Maine — For the small Central Aroostook town of Westfield, canceling its meeting was hardly an option — it had a budget to pass and an important revaluation plan to approve.

That’s why Westfield held its annual town meeting in a room it rented at the Aroostook Shrine Club in Presque Isle on Monday, June 15. It was nearly three months after the planned meeting at the town office — where town meetings had long been held — on March 30.

That initial meeting was canceled because of restrictions related to the COVID-19 pandemic. The town moved the gathering to the shrine club to ensure social distancing, Town Clerk Catharine Simonson said. About 11 members of the public attended, nearly all of whom followed the guidance at the door to wear a facemask throughout the proceedings.

Many of the new expenditures come from increased spending on assessing and equipment reserves. Despite the budget increase, the town’s tax commitment only went up by about $1,500, now numbering at about $566,000

Residents also unanimously elected Conrad Brown to a three-year term as town selectman, assessor, overseer of the poor and road commissioner. He was the only person who ran for the position.

Brown will replace Michael Phillips, who has been involved in Westfield town government for decades. Phillips — who declined to run for re-election — received a standing ovation and send-off during the meeting for his service to the town.

Various local issues were addressed: residents voted to have taxes be due on Oct. 31, 2020, with 7 percent interest charged on the amount due after Nov. 1.

Approximately $36,000 was appropriated for property revaluations throughout the town. Simonson said revaluations happen about every 10 years, and that the process couldn’t have been started without action at the town meeting.

One vote was on adopting a holding tank ordinance in town — Watson said someone had been interested in building such a tank in town, and the selectmen wanted to ensure that he would legally be allowed to do so.

As Andy Yaeger moderated, every measure passed unanimously. There were no controversial or divided votes, but some clarifying questions from residents regarding how money would be spent.

The turnout was about the same as previous years despite the COVID-19 pandemic, Simonson said. Selectmen chair Clinton Watson said he was pleased that there was more discussion than in previous years.

“I was hoping for some more [people attending], but the people that are here are really interested in the town,” Watson said.