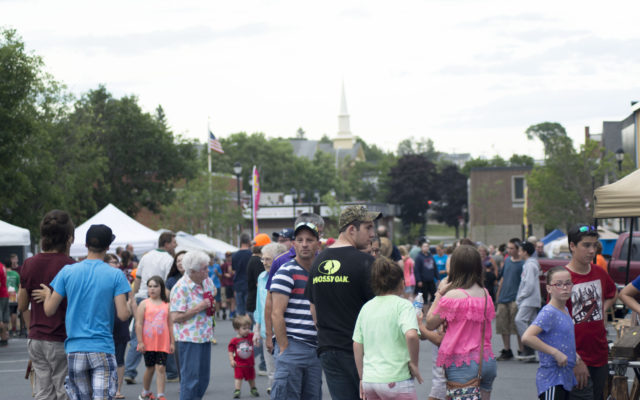 Chris Bouchard • June 23, 2020
Caribou Marketing and Events Coordinator Christina Kane-Gibson is optimistic that there may be a possibility to host the event in August.

CARIBOU, Maine — While Caribou’s popular Thursdays on Sweden street festival is canceled through July, Caribou Marketing and Events Coordinator Christina Kane-Gibson is optimistic that there may be a possibility to host the event in August.

She and organizers are also debating the fate of this year’s Caribou Marathon in September.

Kane-Gibson said she participates in weekly calls with the Maine State Department of Economic and Community Development in which the question of event gathering sizes is almost always a topic.

“So far the state is holding strong at 50 for the foreseeable future,” she said of Maine’s maximum capacity for events. “We’re not going to blanket cancel everything because we feel that the issue is evolving. Every week brings different information.”

Though she spent countless days and nights trying to plan an alternative online version of Thursdays on Sweden featuring broadcasts of live music, she ultimately decided it just wouldn’t be the same.

“I finally came to the realization that the Thursdays on Sweden experience is the actual experience of being there,” she said. “The experience of Thursdays is actually being downtown and seeing everybody, so I think I’m just going to let it be what it is. If we do get together in August it will be the biggest and best party in the summer because we’ve been waiting for it, and if it moves to next summer then it will be even bigger and better.”

She said the city’s decisions to postpone or potentially cancel events are not being made on a whim.

“A lot of thought went behind this, and a lot of sleepless nights,” she said.

Another concern about Thursdays on Sweden is the possibility of guests with underlying health conditions, she said, adding that the city is looking at all facets of the population in determining how to move forward.

“Weighing all of those factors is definitely difficult,” Kane-Gibson said.

She also hopes to make a formal announcement about the future of the Caribou Marathon by July 1.

2020 is the five-year anniversary of the Caribou Marathon, a Boston Marathon-qualifying event held in mid-September that brings in over 1,000 guests and participants from around the world.

While Thursdays on Sweden could potentially be held later in the year, based on state guidelines, a decision would need to be made earlier for the marathon as it requires close to two months of preparation work, including setting up sponsorships and ordering merchandise.

Caribou Days, a three-day event in early August with parades, live music and activities for kids and families, is not likely to take place this year, Kane-Gibson said.

“It breaks my heart to say that,” she said. “A final decision has not been made, but parades are still not okay in the state and we definitely can’t have bounce houses. There’s no way to safely socially distance with that.”

Kane-Gibson said that she and other event planners know these events will be more important than ever once they are permitted.

“For me personally, I think these gatherings are really important for community morale,” she said, “so when we have to cancel them I feel that everybody gets even more let down in a situation that is so crazy already, but we’re trying to hold out hope that things will change.”

I was mentioning to our board of directors this past week that I got a quarterly report from a large online retailer who will donate a portion of my purchases to a charity I select.
Campaign Corner END_OF_DOCUMENT_TOKEN_TO_BE_REPLACED