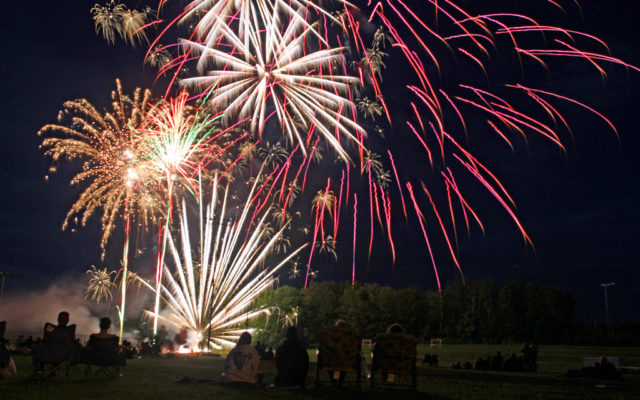 Fourth of July may be different this year, but fireworks are still possible

Staff Report • June 29, 2020
The current environment of social distancing may have doused possibilities for large Fourth of July picnics and celebrations this year, but fireworks displays can be enjoyed both privately and from afar.

AROOSTOOK COUNTY, Maine — The current environment of social distancing may have doused possibilities for large Fourth of July picnics and celebrations this year, but fireworks displays can be enjoyed both privately and from afar.

Despite their beauty and satisfying sound effects, though, their use requires safety precautions. In addition, municipalities may have their own rules about when and where to ignite the pyrotechnic displays.

Maine legalized the sale of consumer fireworks in 2012, and many communities, including Houlton, Presque Isle and Caribou, have adopted ordinances to govern specific areas and times for people to set them off. All three municipalities have banned the use of fireworks within the Urban Compact Zone (city limits) for safety reasons.

The town of Houlton has been renowned for its impressive fireworks displays, with two pyrotechnic shows normally held each holiday. Because of COVID-19 restrictions this year, the traditional displays will not be held. Instead a modified plan was put into place for a show to happen on top of Drake’s Hill — the highest point in Houlton — that does not allow for any congregation to view the show.

According to Houlton’s local ordinance, consumer fireworks are only allowed on lots with at least one acre of land. Fireworks may only be discharged on these properties if they are at least 300 feet away from a neighboring residence or structure, and 100 feet from any wooded areas.

Houlton does not require a permit, but does ask individuals to contact the Houlton Fire Department to inform the department of their intentions. Whenever the fire danger is “high” according to the Maine Forest Service, no pyrotechnic displays are allowed in Houlton.

Houlton Police Chief Tim DeLuca said his department will respond to any complaints of fireworks being ignited illegally. He encourages people to voluntarily comply with the town’s rules for fireworks — as well as gathering to view them.

“We will be educating people as much as possible,” he said.

Caribou’s fireworks ordinance was revised and adopted by the city council in 2012. It does not allow the use of aerial consumer fireworks within the city unless the property includes an ignition location at least 100 feet away from the property line and the fireworks are not used within 100 feet of any building or structure.

Caribou residents need to obtain a permit from the fire department prior to using any consumer fireworks, and aerial fireworks can only be used on days with a low or moderate fire danger.

Consumer fireworks can only be used in Caribou after obtaining a permit from the fire department. The fire department also notifies the police department of all issued permits and may restrict the use of fireworks throughout the entire city at the discretion of the fire chief due to possible fire hazards.

According to the ordinance, anyone who violates the rules regarding fireworks is subject to a fine of $100 to $500. The city can use “probable cause” to confiscate an individual’s fireworks and the police department observes the right to enforce the ordinance. The ordinance also advises people to notify their neighbors if they intend to use fireworks.

Fort Fairfield also has a fireworks ordinance, which their town council adopted in 2018. Permit holders are allowed to use fireworks on July 3 and 4, Dec. 31 and Jan. 1. They can use fireworks between noon and 10 p.m. on those dates, with the exception of New Year’s Day, which allows for use until 12:30 a.m.

Those who wish to launch fireworks during “special occasions” such as weddings or graduations must only use them between 5 and 10 p.m. on the day of the event. There is no charge for the permits.

With the recent hot temperatures and dry weather, safety is an obvious concern — even with sparklers, which are often thought to be among the safest of fireworks. According to the Maine State Fire Marshal’s Office, depending on the type of materials used to make the sparkler, the materials can burn at temperatures around 2,000 degrees F, which can cause severe burns.

Children should be carefully supervised if allowed to handle sparklers, and should not run with them or drop them on the ground. Many medical and fire-safety groups suggest replacing sparklers with glow-sticks or bubble wands, especially for small children.

The Fire Marshal’s Office recommends that consumers using sparklers — and all consumer fireworks — keep a container of water available to put them in after burning, and adds that it is illegal in Maine to sell, use or possess missile-type rockets, helicopters and aerial spinner fireworks, sky rockets, bottle rockets and sky lanterns — larger specimens that contain 20 or more grams of explosive material.

Fireworks seem as much a part of Independence Day as red, white and blue, and by following proper safety steps and municipal rules, County residents can light up the skies over their own Fourth of July celebrations.

Members of the Houlton Band of Maliseets will head to the ballot box in order to determine who will be elected as their new tribal chief.
Pets END_OF_DOCUMENT_TOKEN_TO_BE_REPLACED