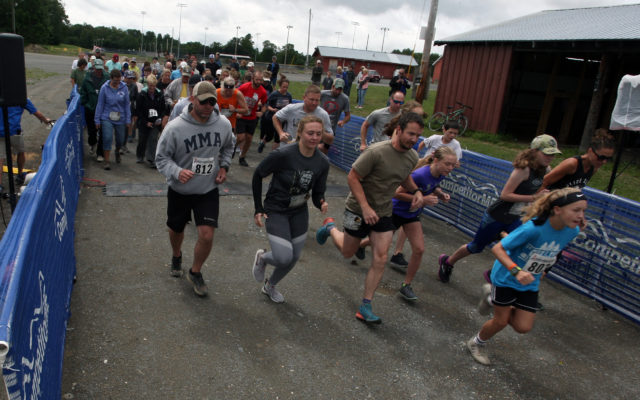 Joseph Cyr • July 20, 2020
While many road races this spring and summer have been held virtually, organizers of the sixth annual Aaron Henderson Memorial Run hoped an in-person race was possible. Fortunately, because the number of COVID-19 cases in Aroostook County have remained low, that hope is a reality.

HOULTON, Maine — While many road races this spring and summer have been held virtually, organizers of the sixth annual Aaron Henderson Memorial Run hoped an in-person race was possible.

Fortunately, because the number of COVID-19 cases in Aroostook County have remained low, that hope is a reality.

The sixth annual SFC Aaron Henderson Memorial Run will be held on Saturday, Aug. 1, at Houlton Community Park. Again this year, all proceeds will go to the Green Beret Foundation, to honor Henderson’s memory.

“We have always been so overwhelmed and grateful for this town’s support in regards to Aaron,” said Kiley Henderson, Aaron’s sister-in-law. “It started from the moment of his death, but it has continued every year, and we cannot say thank you enough for that.”

Henderson served on three deployments to Iraq and one to Afghanistan with the 2nd Battalion. “Rocket,” as he was known with fellow Green Berets, Henderson’s priorities were serving God, his country, his family and others.

Coming home to spend time with his family was one of his favorite things. He enjoyed being at the family camp, hunting, four-wheeling, playing games, sitting around talking and puttering around in the barn.

“We are especially excited to be able to hold this event in person this year,” Kiley Henderson said. “There is something really special about coming together and running it as a ‘team.’ There are so many teams of soldiers still out fighting to protect our country, with no choice to stay home, so it’s an honor to be able to come together and run for not just Aaron, but all of them as well.”

The 5K course will be a cross country style race located on the Houlton Middle-High School and Greater Houlton Christian Academy cross-country course. The course can be muddy and contains some rough terrain, tree roots across parts of the trail, crossing a small river bed and fields.

According to the CompetiorME website, efforts will be made to limit groups of runners to 50 people. To accomplish this goal, runners will be sent out in waves, with the first group heading out at 9 a.m. A second wave of 50 will depart at 10 a.m. Additional waves will be added if needed.

Last year, a group of 59 runners and walkers participated.

Because of the need to limit the number of individuals to 50 or fewer, there will be no race day registration. Social distancing and masks will be required of all in attendance, for the safety of fellow athletes and CompetitorME staff. Runners will not be required to wear masks while on the course.

Spectators will be discouraged from attending in order to control the number of individuals at the start/finish. Instead, participants can use the online resources RaceJoy or Facebook LIVE so they may cheer from home.

There will be no awards ceremony, since all waves need to finish before results are known.

Registration can be found by visiting https://runsignup.com/Race/ME/Houlton/AaronHendersonMemorial5K. All registrants receive event shirts; everyone receives a finisher medal, age group and overall awards, chip timing, personalized bibs, plus a fully supported and staffed course.