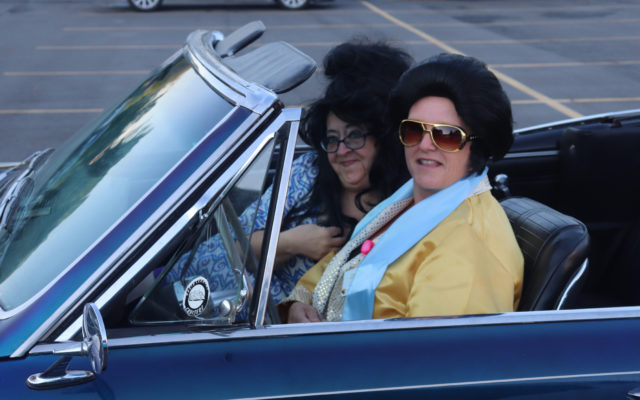 Alexander MacDougall • July 30, 2020
The Elvis theme is just one of several morale-boosting events the hospital has held in the past few months.

HOULTON, Maine — When nurses, doctors and other staff members of Houlton Regional Hospital walked into work on Wednesday, they were greeted with the sight of classic convertible cars, people wearing sunglasses with fake sideburns, and the sounds of songs such as “Hound Dog” and “Blue Suede Shoes” playing over a loudspeaker.

It was all part of the hospital’s “Elvis Day,” an event organized by a morale committee consisting of several hospital staff members to help keep spirits high, even in the midst of the COVID-19 pandemic. 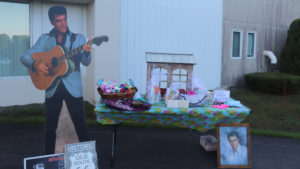 A display showing an Elvis cardboard cutout and various memorabilia from Graceland, his former estate, which hospital staff could enter to win in a raffle. (Alexander MacDougall | Houlton Pioneer Times)

“When people were coming in for work, their shoulders were kind of slumped, knowing they were in for a long day,” said Lori Weston, one of the members of the morale committee. “So we thought, what can we do to lighten the mood, lighten the load and make it that when you come through the door, you’re smiling?”

In addition to the Elvis-themed scenery, staff could also enter into a raffle to win souvenirs from Graceland, Elvis’ estate in Memphis, Tennessee. Weston and other committee members also served peanut butter, banana and bacon sandwiches — a known favorite food of the late Rock and Roll icon.

“Everyone has the ability to come into costume if they want,” said Gina Brown, chief operating officer of Houlton Regional Hospital, herself wearing a pair of sunglasses with sideburns attached. “It has done so much to raise the morale of the staff. They absolutely can’t wait for the next one.” 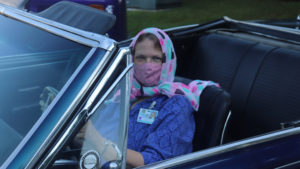 The Elvis theme is just one of several morale-boosting events the hospital has held in the past few months. Previously, the hospital had held a “hippie day” where staff wore tie-dyed T-shirts, and a “Country/Western” day, which saw them decked out in cowboy gear.

The Elvis Day event had originally been planned for June 24, but the beginning of that week saw a sudden outbreak of COVID cases in Houlton, where nine people were infected, including four ambulance workers and an HRH staff member. With the hospital performing drive-thru testing, the event was forced to be pushed back.

But Weston says the morale-boosting events will continue, though on a once-per-month basis, instead of the weekly schedule they had been doing before the June outbreak.

“It just makes people happy. They come in with their heads held up,” said Weston. “That makes it all worthwhile.”

For the first time since 2019, there is competition for open seats on the Houlton Town Council
Pets END_OF_DOCUMENT_TOKEN_TO_BE_REPLACED