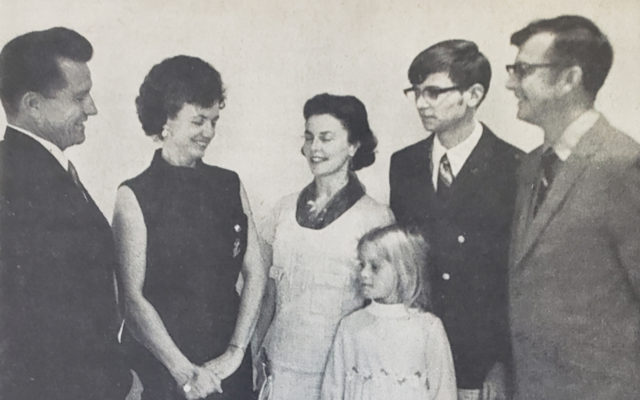 Presque Isle area From our Files – Week of September 7, 2020

Abnaki club took Air Base team into camp — The city of champion Abnaki softball team defeated the Army Air Field club three to one Friday night at the Ari Base. Roy Smith was the winning pitcher.

Presque Isle Fire Department named most outstanding — The Presque Isle Fire Department was aided by the Presque Isle High School Band as they were recognized as the most overall outstanding unit in the parade of the Maine state Federation of FireFighters convention. This seventh annual convention was held in Madawaska. About 500 firemen and their wives attended the convention. Some 27 departments were registered. It was the first time that the convention had been held in Aroostook County.

Medical donation — Shriners, Dick Hallett and Mike Crawford, presented two local orthopedic surgeons, Dr. Gordon Summerville and Dr. Patrick Fallon, plaques to show their appreciation for donating their time at a free Shriners’ Hospital Clinic in Presque Isle onMay 20. The surgeons examined over 30 children of which six were referred to the Shriners’ Orthopedic Hospital in Springfield, Mass. For treatment. All medical services at Shriners’ hospitals are free of charge.

Richard took first place at UMPI invitational meet — Sara Richard, a sophomore from Presque Isle, improved her time by 21 seconds over previous year’s run as she captured the women’s section of the UM-Presque Isle Cross Country Meet. Richard’s winning time over the 3.05-mile course was 19:36. She was followed by Meggan Roushorn (19:51), HoAnne Bellevance(20:48) and Mary Beth Gory (21:06) all from the University of New Brunswick, which won the race with a team score of 21 over the University of New England, which had 48. Richard was the only woman to run for the Lady Owls as injuries and late arrivals kept others from participating.