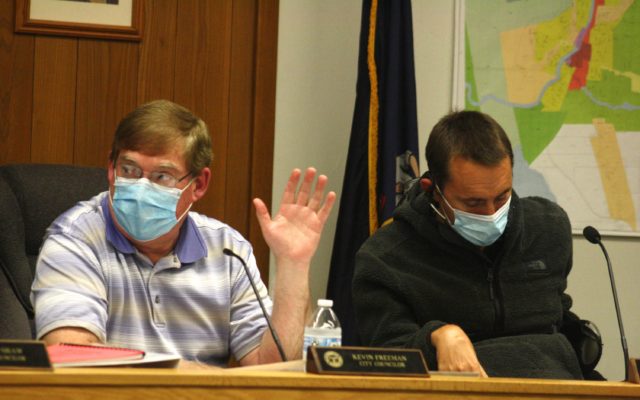 The council unanimously added changes to the marijuana ordinance that it adopted in January. The changes clarify zoning language that could prevent businesses from operating near non-K-12 schools — such as a dance studio or karate dojo — and remove the requirement that applicants be fingerprinted and background-checked by the Presque Isle Police.

After a lengthy discussion, the council also unanimously approved contracts with the Minnesota-based National Renewable Solutions to build a solar farm on land leased by the city near the Presque Isle International Airport.

National Renewable Solutions senior solar developer Brad Wilson said that the panels would provide sustainable energy to the city, along with larger local energy users. The company predicts $1.4 million in savings for Presque Isle over 20 years.

Council members questioned Wilson about the proposal. Councilor Michael Chasse said a competitor of National Renewable Solutions had sent the city a competing offer that would have provided similar services at a lower cost.

City Manager Martin Puckett said other offers would not provide close to the amount of savings offered by National Renewable Solutions, mainly because the city would be leasing the land the panels will be built on. He said this fact had encouraged the Presque Isle Industrial Council to support the deal. Ultimately, the council agreed with Puckett and the Industrial Council, approving the contracts unanimously. Wilson said construction on the panels should begin shortly.

The council also approved two licenses for new businesses in the city: one for a taxi company and the other for a lounge.

Tommie Plourde was given a taxicab license for his Tom’s Taxi company, a service he operates in Caribou and Fort Kent. Plourde — who attended Wednesday’s meeting — said his company is geared toward low-income residents of Aroostook County.

The council also approved liquor and dancing licenses that will allow Bethany Graves to operate Lotus Lounge, which will be located at 149 State St. at the Wintergreen Arts Center’s former location. While the business is still getting all necessary permits, it is slated to open around November.

“I think this is a good opportunity to expand our entertainment businesses in Presque Isle,” City Council Chairman Kevin Freeman said.

The council approved the purchase of a $368,900 bulldozer using funding provided by the Federal Aviation Administration through a CARES ACT grant program. The bulldozer will be used to clear snow around the Presque Isle International Airport’s instrument landing system localizer, a device that helps guide aircraft to the runway.

The city also took new steps in crafting the 2021 budget. Puckett said his budget plan totaled about $70,000 less in spending than the previous year, though the funding originally proposed by Presque Isle’s department heads totaled about $260,000 more than the 2020 budget.  The council ultimately approves the budget, a process that grew contentious last year.

A little more than 20 people — including city staff — attended Wednesday’s meeting. The next city council meeting is on Nov. 4 — the day after the 2020 elections — at 6 p.m.

It was a freezing day across The County, but you could hardly tell from the turnout. Even after a massive surge in absentee ballot requests across the Central Aroostook area, droves of people came out to vote in Presque Isle, Mapleton, Washburn and Fort Fairfield.
Pets END_OF_DOCUMENT_TOKEN_TO_BE_REPLACED