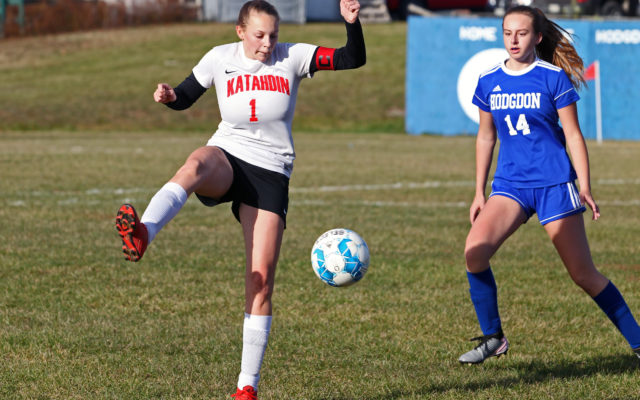 Hawks fly to victory over Katahdin

Joseph Cyr • October 16, 2020
As the regular season winds to a close, both the Hodgdon boys and girls soccer teams are eying the postseason with hopes of bringing home a County championship.

HODGDON, Maine — As the regular season winds to a close, both the Hodgdon boys and girls soccer teams are eying the postseason with hopes of bringing home a County championship. 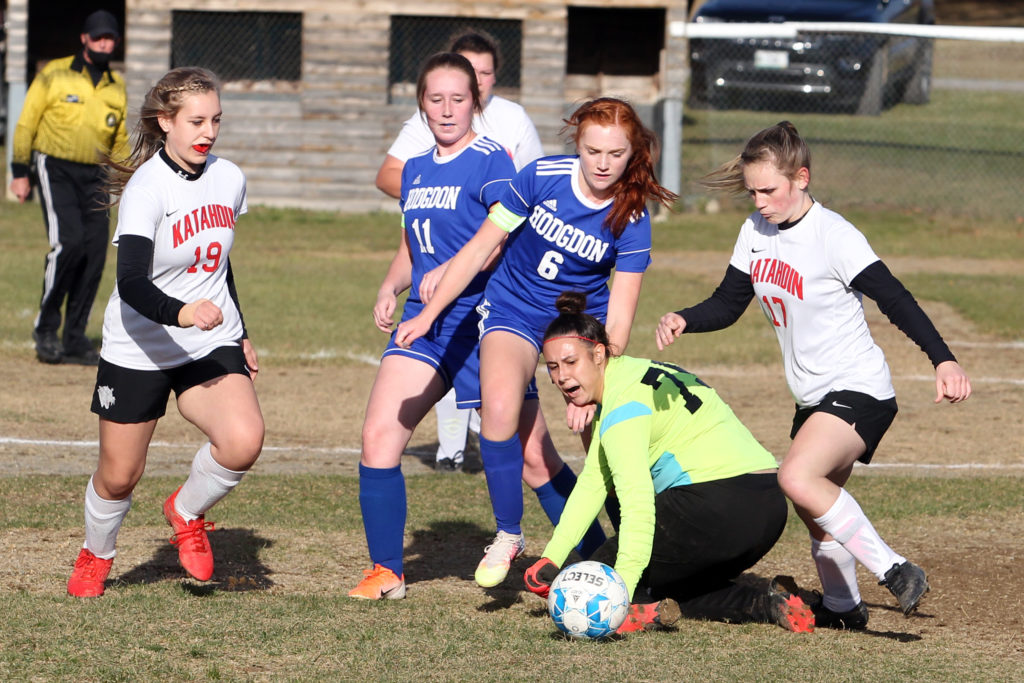 “It’s definitely been an adjustment for us this year,” Hodgdon coach Amanda Stubbs said of the shortened season. “We have really matched up well with every team we have played, which is good.” 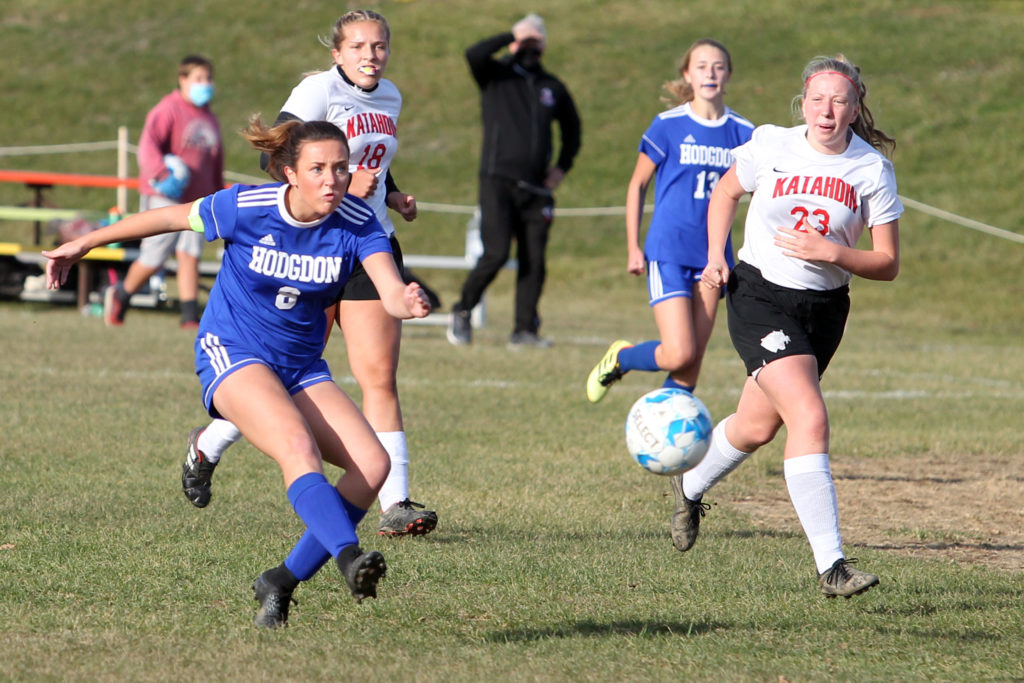 Putting her all into a kick is Hodgdon’s Sabra Scott, left, during a Thursday, Oct. 15, game. Defending on the play is Katahdin’s Charlotte Hart, right, with Makayla Hartsgrove behind. In the back is Hodgdon’s Faith Howland. (Joseph Cyr | Houlton Pioneer Times)

Coach Stubbs said her squad was keenly aware of the impending playoffs and is hoping the team will be able to secure a home playoff game.

“There is a logjam [in the standings] so every win is important for us,” she said.

Emma Drew scored a pair of second half goals to lift the Hawks to victory. Sabra Scott and Mikyla Howland also had one goal apiece. Delaney Little and Faith Howland had assists in the game. 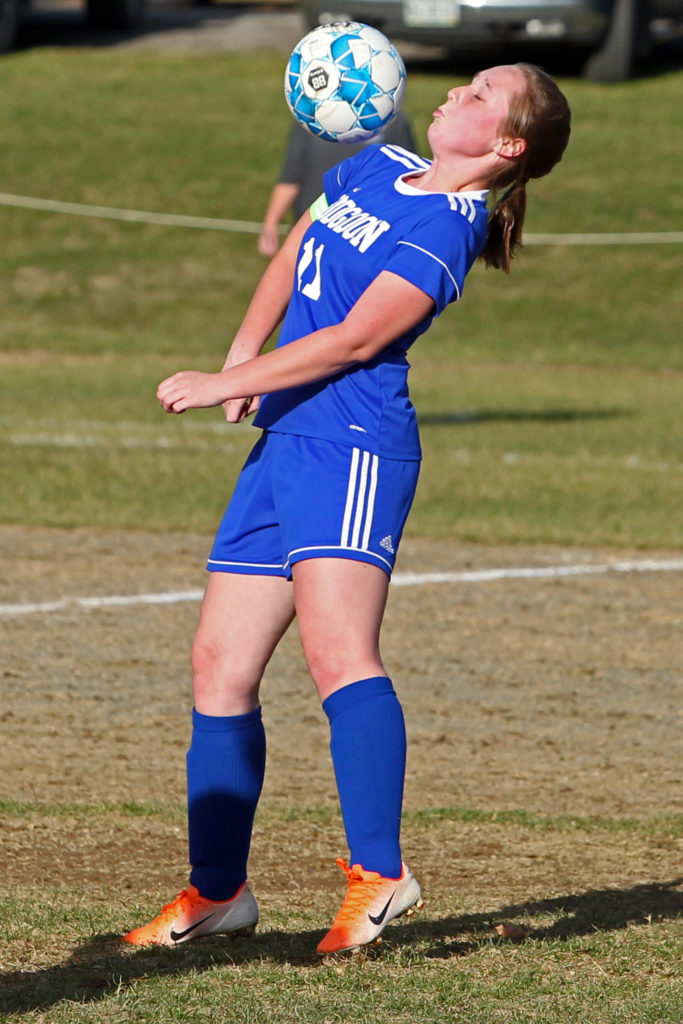 Madison Smith secured the shutout, making 11 saves in goal for the Hawks. Nakita Keim had seven saves on 15 shots for Katahdin.

Thursday’s win marked the first time in five years that Hodgdon has beaten Katahdin on the soccer pitch. For coach Stubbs, it was her first time ever beating the Cougars when factoring in her time spent as the Hodgdon Middle School girls coach.

“I am really happy to finally get that win against them,” she said. “I couldn’t be more proud of the girls and the way they played.” 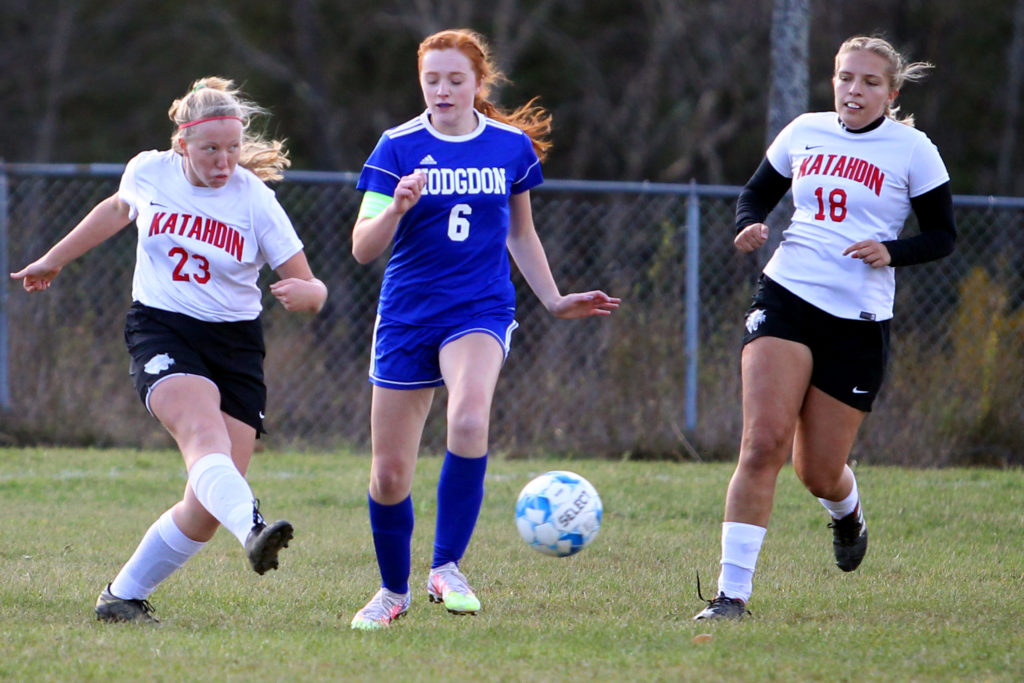 Sending the ball down the field is Katahdin’s Charlotte Hartt as teammate Makayla Hartsgrove approaches from the right. In the middle is Hodgdon’s Emma Drew. (Joseph Cyr| Houlton Pioneer Times)

In the boys game played at Katahdin Middle-High School, Hodgdon’s Josh McGillicuddy scored two goals and added an assist to help the Hawks to victory. Sam Duff and Drew Duttweiler also had a goal.

Wesley Richardson scored on a penalty kick for Katahdin.

Hawks Elijah Matheson and Drew Duttweiler combined for four saves on eight shots for Hodgdon and Kalan Mann made 17 saves in net for Katahdin.