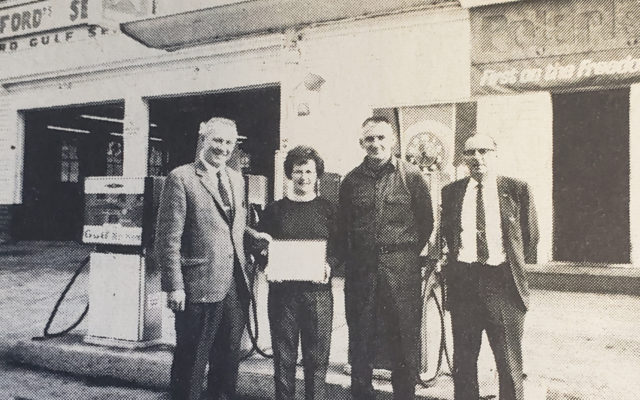 Yvonne Tardie • October 21, 2020
75 Years Ago -  Oct. 25, 1945 Mapleton man enrolled at University in England -- Sergeant Clifford H. Keirstead, son of Mr. and Mrs. Oscar R. Keirstead of Mapleton, and a former student of both the Universities of Maine and Maryland, enrolled at Shrivenham American University in England where the second two-month term opened Oct. 8 with an enrollment of more than 3,000 students.

Sgt. Keirstead took courses in agricultural marketing, farm management and typing at SAU. He commented that SAU “was the ideal set up for a G. I. university.”

Northern National Bank opened a branch at Madawaska — Officials of the Northern National Bank of Presque Isle announced that the bank opened a branch at Madawaska on Oct. 22, 1945. Bank officials said that the Madawaska Branch made available a complete banking service for the people of Madawaska and vicinity. Madawaska itself, is a town with a population of approximately 4,500, and is probably the largest town in Maine without local banking facilities. Harold P. Perkins, a vice president of the bank, was in charge of the branch until a manager was appointed.

Cook graduated from Border Patrol School — John Cook, the son of Mr. and Mrs. Donald Cook of Mapleton, graduated Oct. 16 from the United States Border Patrol Academy at Los Fresnos, Texas, and went on to perform his duties as a Patrol Agent in the Marfa, Texas, Border Patrol Sector. Patrol Agent Cook was a member of the 97th Session of the Border Patrol Academy and was one of 99 new officers successfully completing the intensive academy course in Immigrationa nd Nationality laws and  regulations, Spanish language, duties and authority to act, court procedures, civil rights, physical training and other studies involving the duties of Patrol Officers.

Pioneers donation — The Presque Isle branch of the Telephone Pioneers of America (TPA). a nonprofit organization made up of retired and active telephone employees and volunteers, donated a portion of the proceeds accumulated from fundraisers throughout the year to several local charities. In 1995, the TPA donated $100 to DARE, $250 to the Mantle Lake Playground group and $100 to Operation Lift-Off. Participating in the check presentations were Ernie Drost, spokesperson for DARE; Katie Buck, vice president of the TPA; Kyle Wolfe, TPA president; and Taffy Shaw of the Mantle Lake Playground committee.

Award — J. Paul Levesque & Sons, Inc. of Ashland was one of five companies in Maine to be recognized for their accomplishments in the field of health and safety. The Maine Safety Council Award was given to J. Paul Levesque in recognition of their effort to reduce workplace injuries, the ongoing modernization and improvement in the workplace to make the workplace safer for their employees, and the improved overall safety program and employee involvement. In addition to receiving the award, on Sept. 12, the company was inspected by OSHA. Inspectors toured four sawmills, two planer mills, two boiler/dry kiln plants and maintenance shops. The inspection was completed without any violations and citations issued.