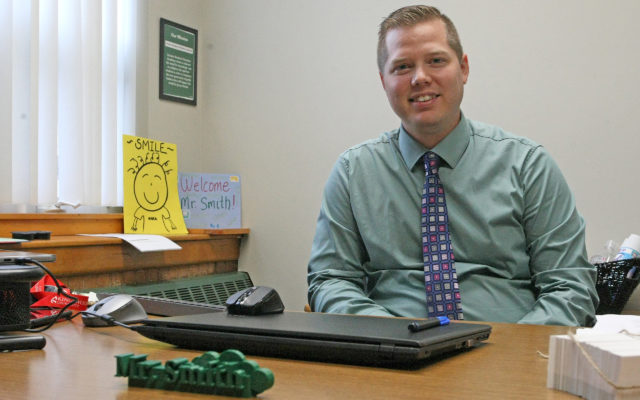 Joseph Cyr • October 21, 2020
The Greater Houlton Christian Academy has a new head of school for just the fourth time in the school’s 36-year history.

HOULTON, Maine — The Greater Houlton Christian Academy has a new head of school for just the fourth time in the school’s 36-year history.

Matthew Smith began as head of school Oct. 1. Smith takes over the position from Tom Zimmerman, who retired Sept. 30 after many years with the school. Zimmerman served as the head of school from July 2015-September 2020.

A native of Centreville, New Brunswick, Smith spent much of his youth in the United States, attending seminars at the Whited Bible Camp in Bridgewater. As a young adult, he attended Kingswood University in Sussex, New Brunswick, where he obtained a degree in Christian School education. He also studied theology.

During his time at the university, Smith said he traveled around many parts of the United States. Once he started a family, he took a break from education and started working in the oil industry, operating mobile cranes.

Smith said he spent a number of years in the construction industry, helping to build schools among other projects. Now, he is looking to put a different set of building skills to work as he helps guide GHCA into the future.

“I have had a lot of different avenues that I have gone down, from designing buildings, managing budgets and working with policy, procedures and [human resource] programs,” he  said. “It gave me a lot of exposure to a lot of different things that I didn’t understand why at that time. Now I realize that I was being prepared for something bigger.”

When an opportunity arose to return to the education field, Smith said it was an easy decision for him and his growing family.

“I have wanted to be a teacher ever since I was kid,” he said. “I didn’t know what God had planned for me, but I knew I would be ready.”

As the head of school for GHCA, Smith is in charge of all aspects of the school, from developing curriculum to building budgets and hiring staff. He is also finally getting a chance to flex his teaching muscles as the instructor for the grades 9-10 Bible studies course.

GHCA has always had a tight bond with its neighbors in New Brunswick, as students from across the border have attended classes at the school. It is also not uncommon for staff members to reside in Canada.

“The cross-border piece was something that I was really excited about,” Smith said. “Even the name, Greater Houlton Christian Academy, tells me that the goal is to expand beyond this building and into the communities.”

COVID-19 did put a bit of a wrinkle into Smith’s hiring process, especially after the border between the two countries closed. Fortunately, Smith said he was already in the process of obtaining his work visa, and once that was approved he was able to pass through the Customs and Immigration Center as an essential employee without any issues.

“We really didn’t think it [hiring] was going to happen because of all the border conditions, but God really helped time everything and put his blessing over it,” Smith said. “For everything to go as smoothly as it has is unbelievable.”

Smith said the transition from Zimmerman to himself mid-school year has presented challenges to him and the students. Not only do the students need to get acclimated to a new leader, but he must learn everything he can about his students.

Smith resides in Hartland, New Brunswick, with his wife Brittany and their four children, Eliana, Harrison, Reuben and Penelope.

History of the School

The following excerpt is from the GHCA website detailing the school’s history.

In September 1984, County Road Baptist School opened its doors in the church facilities of County Road Baptist Church in New Limerick. This was the result of the vision of a small group of church members who desired to see children educated from the perspective of God’s Word. In 1993, the school came under new leadership with Mark B. Jago (now our Head of School Emeritus) and changed its name to County Road Christian School to make the school more available to families of other Bible-believing churches. In October 1995, County Road Christian School became Greater Houlton Christian Academy (to become known locally as “The Academy”) and was incorporated as an independent, non-profit Christian School association of parents and members.

The Lambert School building on School Street in downtown Houlton was purchased in 1996 for only $1. The association took out a substantial loan to renovate the building, which was paid off completely in 2005. Thousands of hours of volunteer work, contracted labor and many love gifts from interested and caring friends transformed the building into the Academy’s new home.

GHCA experienced great growth at its new location, adding students and programs. A dream was fulfilled in 2010 when the school achieved a ten-year accreditation with both the New England Association of Schools and Colleges (NEASC) and the Association of Christian Schools International (ACSI). In that same year the school became fully approved by the State of Maine Department of Education. The future vision for the Academy is expressed in a Five-Year Strategic Plan which maps the vision of the school in the areas of academic excellence and financial stability.