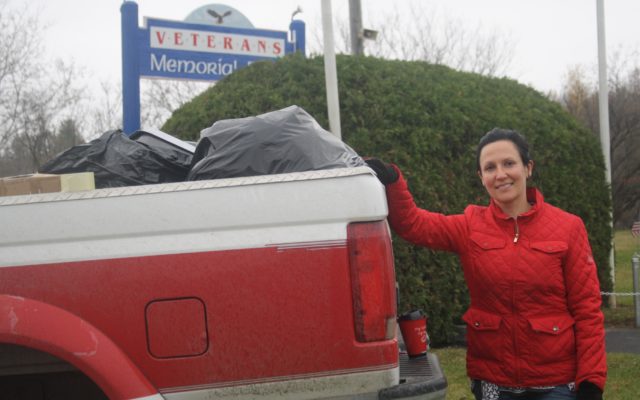 Lavado, who is running against Republican candidate Joseph Underwood for a Presque Isle-based seat in the Maine House, planned to give the items to various organizations, including the Hope and Justice Project, Maine Department of Health and Human Services and Micmac Domestic and Sexual Violence Advocacy Center.

She said she organized the drive to raise awareness of the plight of domestic violence victims and at-risk youth — one only exacerbated by the COVID-19 pandemic — and highlight how community action can alleviate social problems. October is also Domestic Violence Awareness Month.

Lavado — who has long participated in community organizing in the Presque Isle area — has revved up campaigning across the city in anticipation of the election on Nov. 3, knocking on doors and meeting with local leaders. Her candidacy has also been promoted in several ads on social media.

Lavado said that even items that may seem non-essential are important for those getting back on their feet.

“[These items are] all those little things that you need but don’t have when you are getting established,” Lavado said.

Lavado said she would continue to collect donations until she delivered items at midweek.

In a Facebook post in September, Lavado wrote about being a victim of domestic violence, highlighting the psychological and economic damage experienced by victims even after they  leave abusive situations.

The donation drive had initially been scheduled for Oct. 17 but was canceled because of rain. Saturday’s event was slated to go until 1 p.m. but also ended early due to showers.

Next year's Caribou City Council will include a new member and a longtime councilor thanks to Tuesday's election.
Pets END_OF_DOCUMENT_TOKEN_TO_BE_REPLACED

When I wrote the first story of our dog Odie, I didn’t know that I would write a Part 2, but there were so many more stories that I decided more of this little dog’s story needed to be told.
What's Happening This Week END_OF_DOCUMENT_TOKEN_TO_BE_REPLACED