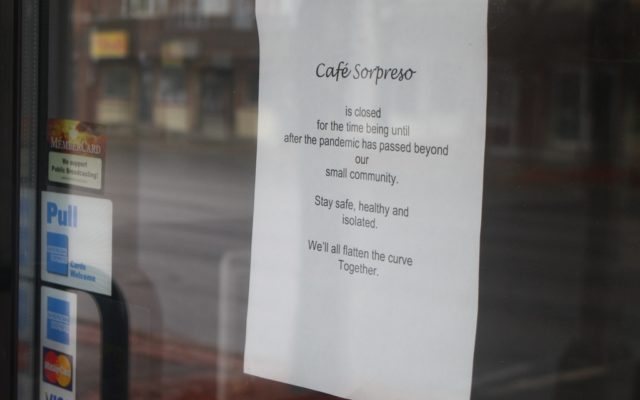 Presque Isle cafe closing after more than a decade in business

David Marino Jr. • May 12, 2020
A staple of Presque Isle’s Main Street will be shutting its doors for the time being after more than a decade in business.

PRESQUE ISLE, Maine — A staple of Presque Isle’s Main Street will be shutting its doors for the time being after more than a decade in business.

Judy Boudman — who owned Cafe Sorpreso with her husband Cliff — said their landlord asked her to vacate the building by the end of June. The building’s landlord is attempting to sell the property and believed it would be easier to sell without an occupant, Boudman said.

Cafe Demoiselle, also owned by the Boudmans, had already closed amid the economic difficulties of the COVID-19 pandemic. They were in the process of moving the bakery into Sorpreso when the landford informed them of her plans.

Like many restaurants across Presque Isle, Gov. Janet Mills’ civil state of emergency orders forced Sorpreso to rapidly rework its business model. After closing to diners, the restaurant operated as takeout-only for just two nights before halting.

“It was very clear that it was not going to be worth it,” said Judy Boudman. “That’s not the type of business we had.”

At the time of their closing, Cafe Sorpreso had 13 employees and Demoiselle had six, all of whom will likely receive unemployment benefits while they seek new work.

Judy Boudman plans on selling some equipment from Sorpreso and Demoiselle and putting the rest in storage. She hopes to be able to restart the restaurant at a new location in Presque Isle, though she is unsure when given the current situation faced by the food service industry.

Opening Cafe Sorpreso and Demoiselle were part of Judy Boudman’s dream of being part of a revitalized downtown in her hometown of Presque Isle.

With several popular staples and a dynamic menu, Cafe Sorpreso quickly achieved a reputation for bringing the fine dining of a European cafe to the Star City. Shortly after it opened in November 2007, the Presque Isle Chamber of Commerce named it its 2008 Business of the Year.

It also became a congregation point for the community, hosting several fundraisers and entrepreneurial events. The Central Aroostook Chamber of Commerce hosted its long running Eggs & Issues Breakfast there and the Aroostook County Action Program and Presque Isle Downtown Revitalization Committee utilized the spot for meetings.

Always interested in trying to give back, when the federal government was partially shut down for one month in 2018-2019, it offered free lunch to any federal employees furloughed or forced to work without pay until the end of the shutdown.

An outpouring of support came for the owners when it announced it was closing in a Facebook post on Thursday, April 30. Judy Boudman said she could only read some of the comments at a time because they made her cry.

“I would tell my customers ‘thank you’ and that we will see you all again in some form,” Judy Boudman said.

Next year's Caribou City Council will include a new member and a longtime councilor thanks to Tuesday's election.
Pets END_OF_DOCUMENT_TOKEN_TO_BE_REPLACED

When I wrote the first story of our dog Odie, I didn’t know that I would write a Part 2, but there were so many more stories that I decided more of this little dog’s story needed to be told.
What's Happening This Week END_OF_DOCUMENT_TOKEN_TO_BE_REPLACED