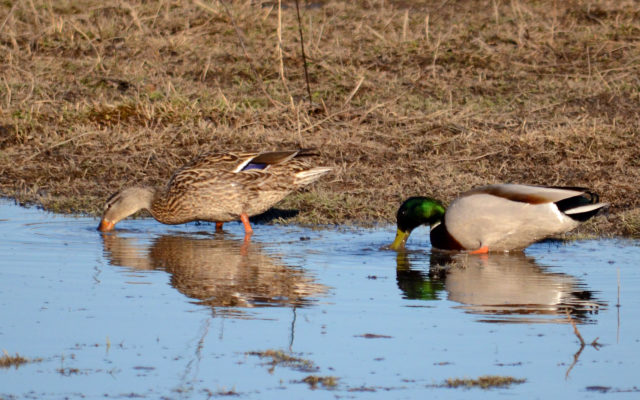 No drought for ducks

Bill Graves, Special to The County • November 2, 2020
The Canada/Maine border crossings may be closed to regular traffic but that certainly hasn’t curtailed the feathered migration using the sky to visit Aroostook and points south.

The Canada/Maine border crossings may be closed to regular traffic but that certainly hasn’t curtailed the feathered migration using the sky to visit Aroostook and points south.

Our terribly dry summer turned out to be a boon for regional wild fowl resulting in burgeoning populations of partridge and many species of ducks. Waterfowl gunners are all experiencing consistent action on mallards, wood ducks, black ducks, blue and green winged teal and even a few other lesser seen species, like widgeon and pintails.

This summer’s drought conditions proved detrimental to farmers and home gardeners with more than a few wells running dry, but there was some benefit to duck hunters. Many small farm ponds, bogs and marshes dried up and disappeared, leaving far fewer waterways for the waterfowl to occupy and making it a bit easier for sportsmen to locate and hunt birds.

There are actually two types of water that ducks utilize on a daily basis, and it’s very important that hunters be able to differentiate between the two. Roost ponds are where waterfowl feel comfortable and safe enough from people and predators to spend the night. It is important that these spots be left alone and not hunted or the birds may not only leave that particular safe haven but fly off to an altogether different area. Roost waters may actually be ponds, but can also be lakes, reservoirs, or even coves, bogans, eddies or backwaters on large streams or rivers.

Once the ducks fly from their roost water at dawn to a nearby field to feed, it’s likely they won’t return until dusk. Usually the ducks will eat again for an hour or two in the late afternoon, then head back to roost ponds. During the day they will spend time on a rest and relax waterway, and these spots are perfect to set out a spread of decoys and ambush ducks as they show up in small flocks.

A good number of waterfowlers would rather field hunt, and get out before dawn to set a bunch of goose and duck decoys in pre-scouted, harvested grain or potato fields. While this is less work and drier than a water setup, it’s usually a shorter hunt with fewer opportunities since the early feeding ducks fly in larger flocks and all within a short period of time. The ducks seeking rest and recreation water to digest food and float in the sun will come and go late morning and all afternoon, offering steady action.

Even with the drought conditions, there are plenty of ponds and calm stretches of rivers holding ducks, enough so running into other waterfowlers is seldom an issue. Recent rain has rejuvenated many of the wetlands and a bit of drive-and-spot scouting with binoculars is sure to uncover several duck havens. Alternating between several honey holes between hunts won’t be likely to drive birds away completely. 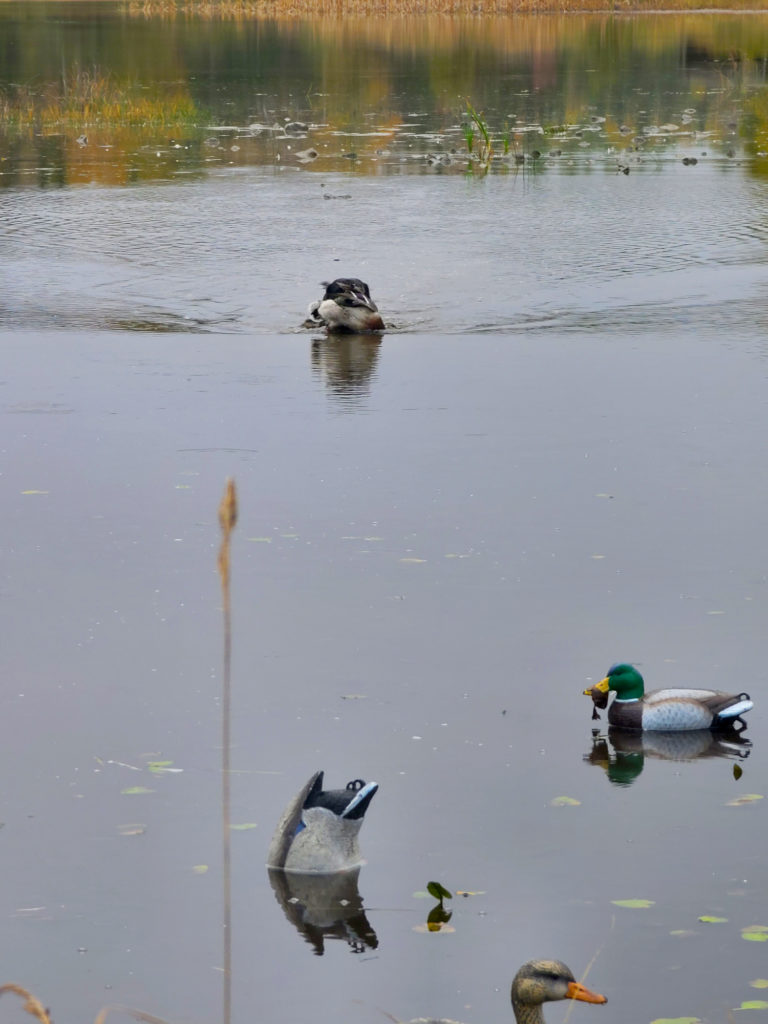 Waterfowl hunters who intend to place decoys on lakes and ponds or jump shoot along streams need to wear waders or have a well trained retriever like Bandit, who is returning with a fat drake mallard. (Courtesy of Bill Graves)

I utilize two very different but equally effective methods of gunning ducks on water, perhaps others will want to try. I visit a pond, bogan or cove where I’ve seen ducks regularly, set out eight to 10 decoys about midmorning, hide in the shoreline brush and wait for ducks to show up after feeding. Using a spinning wing decoy or a couple of battery operated swimming or vibrating motion decoys will add activity and realism on calm water.

Some years it’s exciting and productive to float a canoe down a stream or river to sneak close and flush ducks for a shot. Aroostook’s extraordinarily dry summer makes this nearly impossible this fall, so my backup option is jump shooting from shorelines. With farm field roads, ATV trails, snowmobile trails and fishermen’s paths, there’s plenty of access to every river and brook to sneak, peek and shoot.

To assure more action I usually go with one or two buddies and we split up at least 50 to 75 yards apart to approach stretches of stream likely to hold ducks, This way, no matter if the birds fly upstream, downstream or both, someone gets some shooting, occasionally everyone. Don’t forget that a state and Federal duck stamp is required to hunt migratory waterfowl and only steel or non-toxic shotgun pellets are legal. Make sure to review the limits for all the species, or have your cell phone at hand if there’s a question; all the rules, regulations and limits are available online. 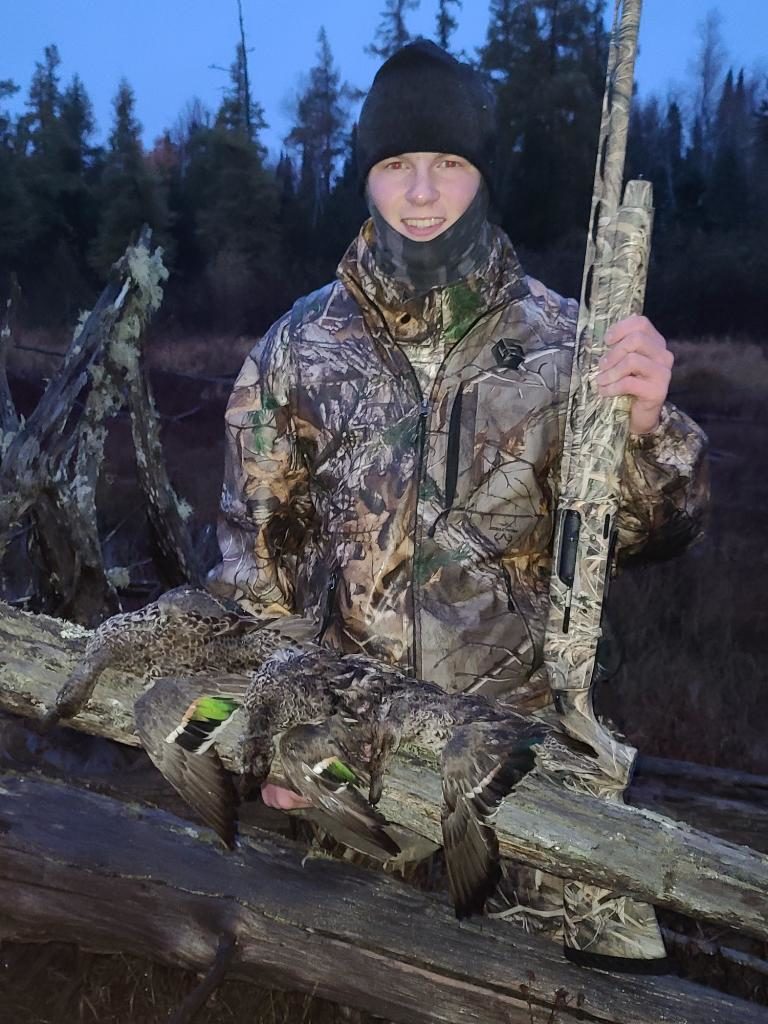 Teal seem to be everywhere there is water this fall and these small, swift-flying ducks are a challenge to hunt. Carson Cushman enjoyed a fruitful afternoon outing including this trio of green-wing teal. (Courtesy of Bill Graves)

October was great duck hunting and November should be even better as more waterfowl migrate into Maine. Another plus is that many sportsmen forsake all other quarry once deer season opens, so there will be less competition for top-rate fields and waterways.

Get out early and often, say a short prayer that ice and snow hold off awhile since the season goes clear into early December if the birds stick around. Be safe, keep your cheek against the gunstock and swing through the fast flying fowl.