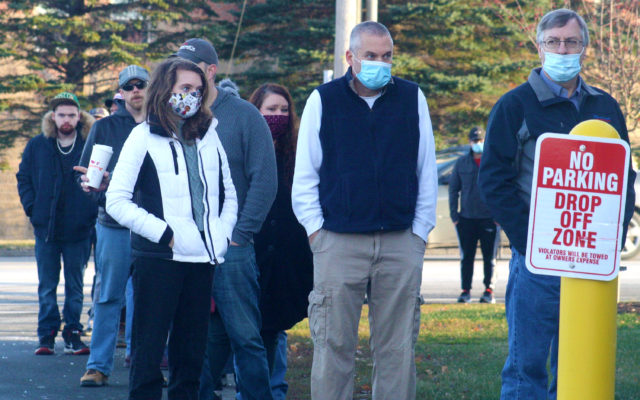 David Marino Jr. • November 4, 2020
It was a freezing day across The County, but you could hardly tell from the turnout. Even after a massive surge in absentee ballot requests across the Central Aroostook area, droves of people came out to vote in Presque Isle, Mapleton, Washburn and Fort Fairfield.

PRESQUE ISLE, Maine — Residents in the Presque Isle area came out to vote in droves on Election Day on Tuesday, casting important decisions on races from the presidency to the Maine Legislature. 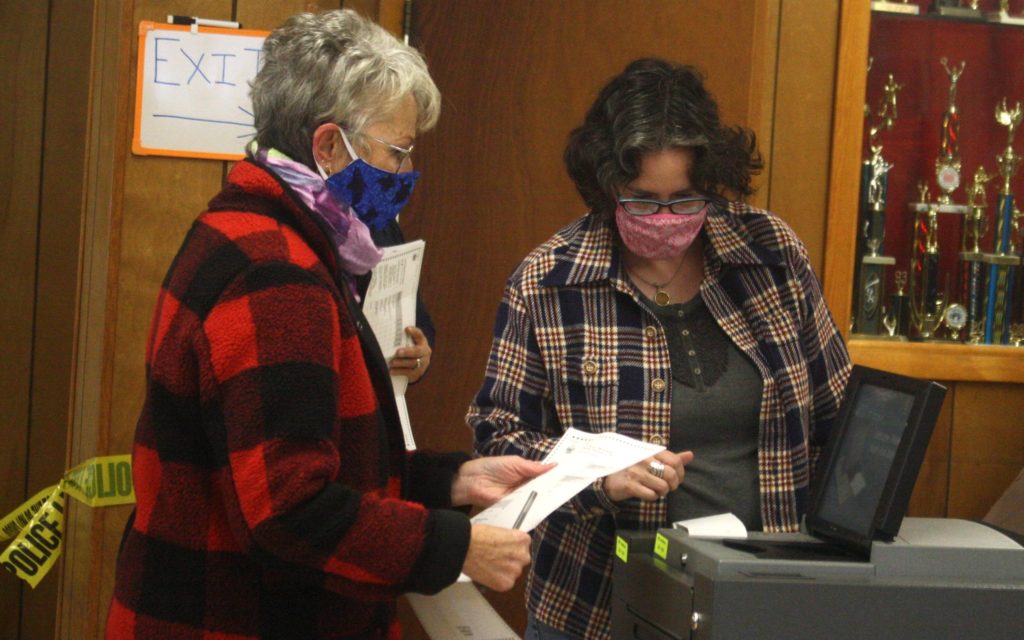 In the three-person race for two four-year seats on the Presque Isle City Council, incumbent councilman Craig Green came in first with 39 percent of the vote (2497 total) and incumbent councilman Kevin Freeman in second with 33 percent (2,117). Donald Gardner came in third with 27 percent (1,688).

In the Maine House District 147 race, Republican candidate Joseph Underwood won the seat with 55 percent of the vote (2,074 total), while Democratic candidate Lillie Lavado came out with 45 percent (1,728 total). 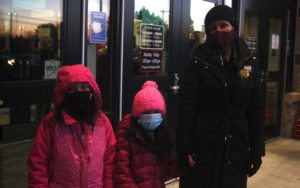 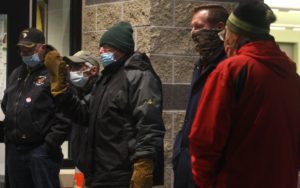 Speaking on Wednesday morning, Underwood said his grassroots campaigning — especially door-knocking — had allowed him to introduce himself to a primarily Republican electorate willing to support him. He said he would meet with other Republicans in the Maine Legislature on Friday for committee assignments.

Lavado said she knew running as a Democrat in a traditionally Republican area was a longshot. She said her status as a “working mother” had prevented her from campaigning as frequently as had Underwood — who is retired.

Lavado said she would continue to participate in community organizing, and would closely watch Underwood’s tenure in the Legislature, especially if he attempts to push policy on firearm training in schools and reversing COVID-19 regulations. 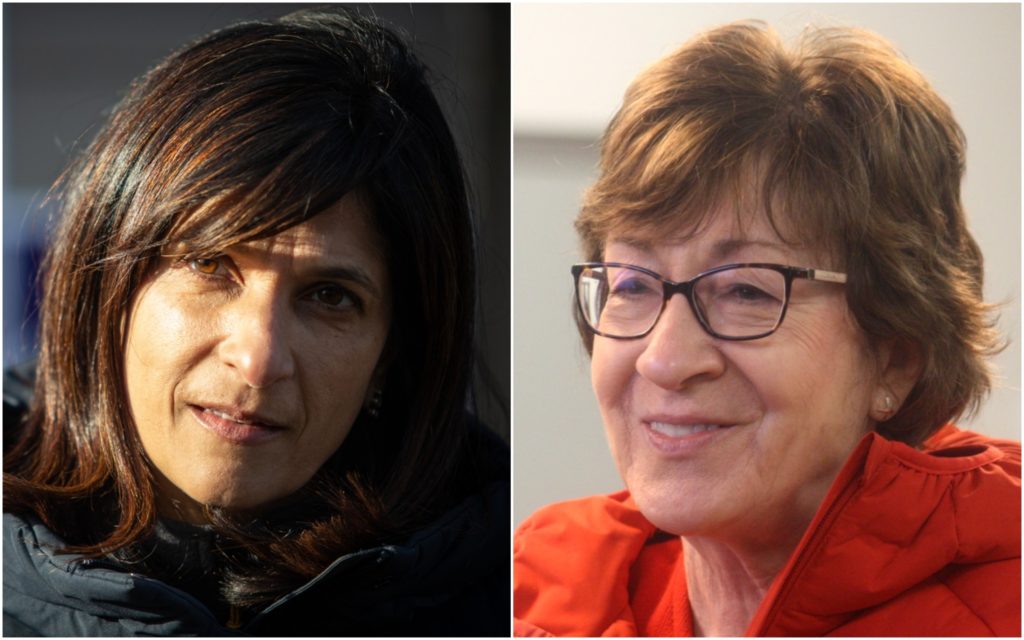 With the largest population in Aroostook County at 9,000 people, no place had a higher turnout than Presque Isle, where three dozen voters waited in line around when polls opened at 7 a.m. Most were voting before going straight to work.

Many voters in Presque Isle had the chance to meet their candidates face-to-face: a row of them lined the entrance-way around 5 p.m., including Lavado, Joseph Underwood, Carpenter, Stewart and Paul Underwood.

Several of the candidates said they enjoyed greeting voters — that’s all they are allowed to do, as Maine law sets barriers on campaigning near polling stations.

Lavado said it was heartening to see such a high turnout from Star City voters.

“Regardless of which way they are voting, it really says something,” Lavado said.

While some Presque isle voters chose candidates from one party down the ballot, many of them split their ticket by voting for both Democrats and Republican candidates, including Luke Wieder, 61, a retired electric lineman.

Weider’s two significant issues were the Second Amendment and health care: that’s why he voted for Trump, Collins and Stewart, but also Golden.

“[Golden] seems to be for everything that I’m a firm believer in, even though he’s a Democrat,” Weider said. “I think he’s a good fella to have. He seems to be more positive in a lot of the things he’s talking about.”

Many had their own unique reasons for choosing candidates: Donna Lisnik, 73, said that she voted for Biden because she wanted to see the United States respected on the world stage once again. She also felt that his policies had hurt the poor, even if she had been better economically under Trump.

After an exhausting election cycle, Lisnik said she was just hoping for a peaceful outcome.

“I just hope that we can get back to a kinder, friendlier nation, regardless of who wins,” Lisnik said. 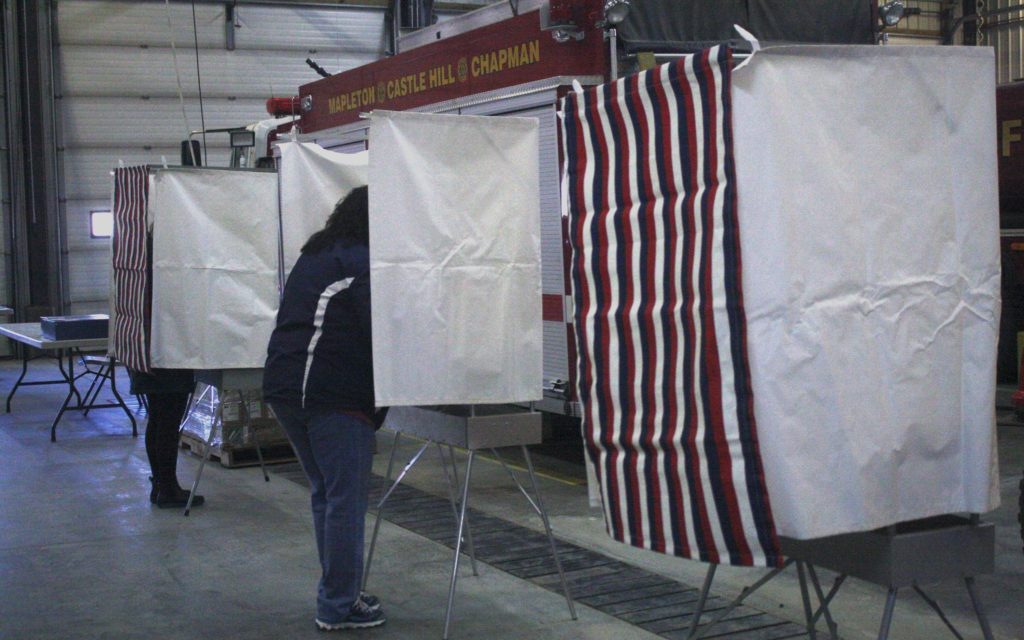 While Mapleton only has a fraction of Presque Isle’s population, turnout was surging there too: ballot clerks Nadiene Brewer and Bonnie Steeves said turnout appeared to have tripled since the last presidential election. Voters had already requested 400 absentee ballots in advance.

With a more massive turnout came many new voters, and the one thing that was confusing several Mapleton residents was ranked-choice voting, Steeves said. Many feared that they would fill their ballot out wrong, causing the vote not to be counted.

Christel Winslow, a 42-year-old cook, said that she voted for Collins — who she called a “County girl” — even though some of her decisions caused controversy.

“She’s always worked hard for this state,” Winslow said. “We may not always like some of the choices that she makes, but I think eight out of 10 times she’s doing a good job.”

Asked why she voted in-person instead of absentee, Winslow said voting was one of the most patriotic things someone can do.

“I think it makes a big statement as far as the process and people that have put their lives on the line for our right to vote,” Winslow said. “It’s about being proud of being an American.”

While many Americans treasure voting, 53-year-old Sheila Mccormack, a bus driver, echoed many central Aroostook voters when she said that she was glad the election was finally going to be over.

“This election had a lot of bashing back and forth,” Mccormack said. “It got tiresome with the politics.” 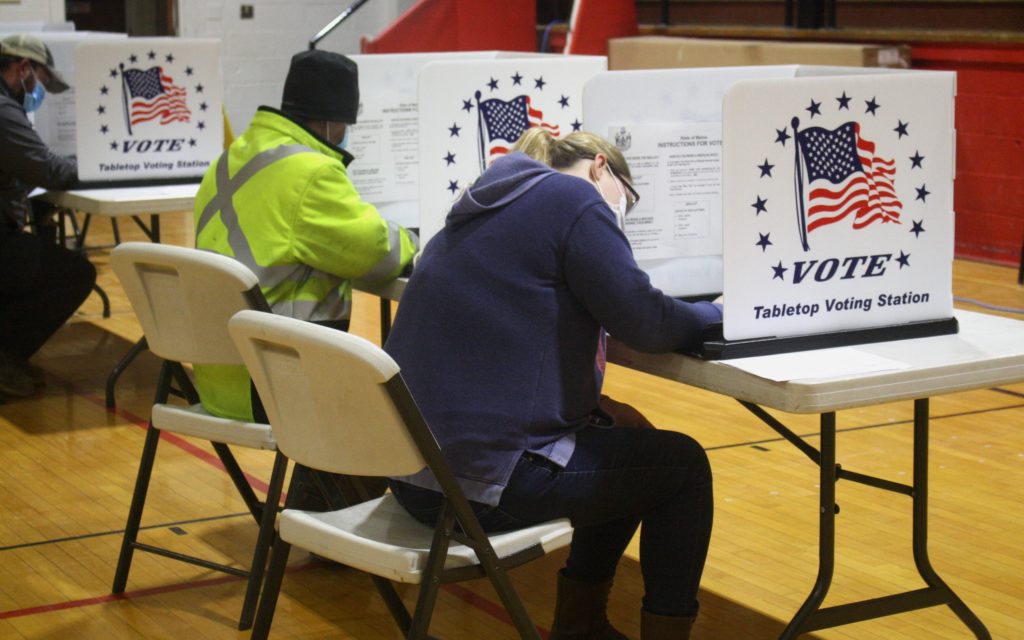 Fort Fairfield also saw big numbers, with many young voters visibly coming in and out of the town office.

Andrew Brown, a 28-year-old UPS driver who said he was voting for the first time, said he wished he could have voted for Bernie Sanders for president. But Biden, Gideon and Golden were the next best options to create a better environment for progressive ideals like labor rights — one that was not possible under Republican leadership, he said.

“[Gideon] doesn’t really stand for a lot of the things that I would fight for,” Brown said. “But it’s about getting someone that allows the House and the Senate to get a Democratic majority.”

While many filed for absentee ballots, many voting in-person said they came to the polls because they were skeptical about the absentee voting system.

“I always vote in person,” said 53-year-old Barbara Pelkey. “That way, I know that it gets counted.”

Aaron Giberson, a 48-year-old funeral director, said that he supported Trump because he had had many accomplishments over the past four years. He also thought Joe Biden was too far to the left.

But in an election that has been marked by the COVID-19 pandemic, along with fears about absentee voting creating confusion long after Election Day, Giberson was skeptical he would even get to see a winner crowned on Tuesday.

“Maybe within a week or two, we’ll find out who’s president,” Giberson said.