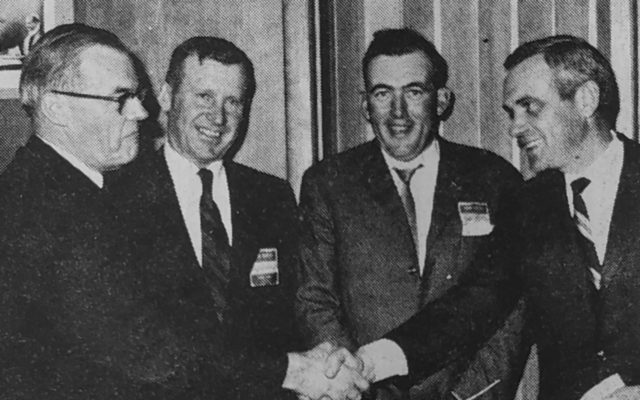 Yvonne Tardie • November 18, 2020
75 Years Ago -  Nov. 22, 1945 Halloran named manager -- The Produce Dealers Supply Company announced that William Halloran was appointed manager of their Presque Isle office and warehouse. This company had been serving Aroostook County potato dealers and shippers for over thirty years.

Halloran named manager — The Produce Dealers Supply Company announced that William Halloran was appointed manager of their Presque Isle office and warehouse. This company had been serving Aroostook County potato dealers and shippers for over thirty years.

The new management intended to continue the Company’s policy of high grade service and quality in supplying burlap and paper bags, twine and sheathing paper. Mr. Halloran had resided in Presque Isle for ten years and operated a potato brokerage and shipping business which he continued in addition to his new job.

Benson promoted — Mr. and Mrs. George A. Benson of Presque Isle received news from their son, Russell, that he had been promoted to Tech. Sergeant, jumping the rank of Staff Sergeant. Sgt. Benson, who graduated from Presque Isle High School, Class of 1940, enlisted in the 705th Military Police Battalion, on August 20, 1942, receiving his basic training at Brattleboro, Vermontt. Later, he was shipped to Togus, then to Fort Devens, Massachusetts, and Fort Custer, Michigan, for advanced training.

Goheen elected to mission board — Mrs. Royal Goheen of Presque Isle was one of six Maine people to attend the annual meeting of the United Church Board for World Ministries in Seattle. The meetings opened Sunday, Nov. 15, and continued through Wednesday, Nov. 18. Racial Justice was a “planetary priority” for the overseas missions of Christian churches, the Rev. Dr. David M. Stowe, New York City, said during his installation as executive vice president of the United Church Board for World Ministries. The board, founded in 1810, was the oldest American overseas missionary agency.

Victory celebration — Senator-elect Floyd Harding and Registrar of Probate Glen Manuel exchanged pleasantries with Gov. Kenneth M. Curtis during a victory dinner at the Northeastland Hotel in Presque Isle, sponsored by county Democrats Friday evening, Nov. 20. Local Democrats said that even with a vote recount in the process, they were certain enough of the outcome to hold Friday’s victory celebration.

VFW appointment — Edward C. Dahlgren, of VFW Post 2599 in Presque isle, was appointed by VFW National Commander-in-Chief Paul A. Spera, to serve as a National Aide-de-Camp, Medal of Honor Class for 1995-96. He was a resident of Mars Hill. Dahlgren was awarded the Medal of HOnor for action above and beyond the call of duty during World War II.

MAC player of the year — Danielle Derosier, a junior at the University of New England, was named Maine Athletic Conference Player of the Year in soccer for the second consecutive season. Derosier, a 1993 graduate of Presque Isle High School, scored 18 goals and had nine assists during the season for the Knights, who finished as runners-up to the University of Maine at Presque Isle in the conference playoffs held the previous month. According to UNE coach Doug Biggs, Derosier’s work ethic and steady improvement in skills were the main factors behind her success at the collegiate level. Derosier, a forward, was also named the conference’s top player in 1994 after scoring 13 goals and establishing a team record with 20 assists. She also was named to the Northeast Regional Team and the All-Maine team the previous season.

On all-star team — University of Maine at Presque Isle senior guard Simon Mitchell and junior forward Glenn Sharp were both named to the Maine College Basketball Coaches and Writers Association’s preseason all-star team. The Owls were picked as the fourth best team in the state by the coaches, behind St. Joseph’s College, Colby College and Husson College. Westbrook College was ranked fifth.