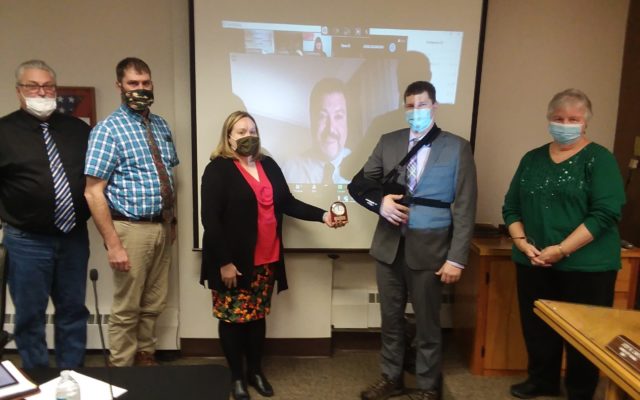 Deputy Mayor Thomas Ayer, who also served on the planning board, said it was an honor to serve with White on the board.

“He and Phil Cyr alternated between chair and co chair for many years,” Ayer said. “I enjoyed my time on the planning board before I came to council. And Rob would definitely tell you his opinion – that’s what I appreciated about him.”

White’s accomplishments during his time on the board include being involved with the city’s comprehensive plan, the Maine Veterans Home, the Riverside Motor Court, multiple daycares and preschools, the expansion of Porvair Filtration, the Caribou Community School, the St. Peter gravel pit, Griffin Used Auto Sales, and the Daigle Oil diesel fuel station.

“Mr. White has been on the planning board since 2013 and he’s going to be greatly missed,” Ayer said. “I know for sure I’m gonna miss our monthly squabbles. Of course with COVID being the way it is, Robert is not able to be here tonight, but the city purchased him a clock for his recognition.”

Caribou City Manager Dennis Marker said the clock says “thank you for your time,” and recognizes his service over seven years.

“Bob will surely be missed and I hope he enjoys any future endeavors,” Ayer said.

Councilor Doug Morrell congratulated White and complimented his investment of time and his selflessness in “trying to help the city move in a positive direction.”

Ayer then recognized councilors Nicole Cote and Hugh Kirkpatrick, who have served since 2017 and 2018 respectively.

A few of the items they were involved with over their time on council include the Hilltop school redevelopment and relocation of Teague Park, updating the city’s TIF policies, streamlining the review of annual liquor and small business licenses, formalizing finance policies on return checks, tax acquired properties, and the disposal of surplus city property, creating a citizen’s airport advisory committee, authorizing the acquisition of LED streetlights and saving the city $70,000 per year in energy costs, and addressing impacts of COVID-19 on city operations.

Ayer said he appreciated the time both have put into serving the city.

“It’s been a pleasure working with both of you. Thank you,” said Morrell.
Marker presented both with a clock and asked if either would like to say a few words about their time serving the city.

“Thank you to the citizens of Caribou for supporting me and allowing me to sit in a chair in the council chambers,” Cote said. “Being a councilor is a lot of work. It’s a huge commitment, and you learn a lot.”

She said that she is ready to move on, but that she will come back to serve the community soon.

“I believe in Caribou and I believe in the community,” she said. “I moved back here 13 years ago because there’s no better place to raise a family than right here in Caribou, Maine. And that’s why I’m right here. I’m really proud of this community and I’m really excited for next year’s council. I know there will be great things that come. So, again, thank you so much for this opportunity and best wishes to the next council.”

Kirkpatrick said it was a pleasure working with Cote and everyone on the council.

“I went into this with an open mind and, like Nicole said, there was a lot to learn, and I found it quite enjoyable,” he said. “I would look forward to it if I ever decided to do it again. I appreciated working with all of you. Thank you for the opportunity.”
Ayer thanked both Cote and Kirkpatrick again for their time and dedication to the city.