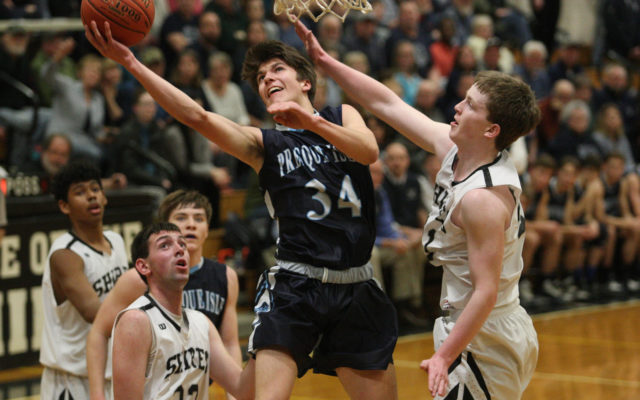 Joseph Cyr • January 7, 2021
When the high school basketball season tips off Monday, things will be vastly different than in previous years.

HOULTON, Maine — When the high school basketball season tips off Monday, things will be vastly different than in previous years.

Gone will be the sounds of fans cheering and the smell of popcorn being popped as all of the games will be played inside empty gymnasiums, with players, coaches and officials all wearing masks.

And while no spectators will be allowed, fans of the sport will still be able to watch nearly every game this season from the comfort of their own homes thanks to a collaborative effort between Northern Maine Media and WAGM-TV.

“We will have a camera in every gymnasium in Aroostook County, with the exception of Madawaska,” explained Fred Grant, owner of Northern Maine Media Inc./WHOU-FM. “Our plan is to cover every game that happens in the gym, whether it is varsity, jayvee or middle school.”

Madawaska is not included in the collaboration between the two media groups as the district has its own online television station (WOWL) and will broadcast games themselves through a Youtube Channel.

Games at Fort Kent will be handled by WFKT, in conjunction with Northern Maine Media.

The streaming of games also extends to hockey for both Presque Isle and Houlton, Grant said.

Basketball season officially begins Monday with the Easton boys playing at Fort Fairfield and Southern Aroostook boys travelling to Hodgdon. The schedule is subject to change based on weather conditions or if schools have to switch to a remote learning mode for educational purposes.

Most County teams are scheduled for 12 games, except for Fort Kent, Madawaska and Wisdom — which are currently in a remote learning mode and will not start games until Feb. 1. Those schools have eight-game schedules.

Many games will feature the traditional broadcasting style featuring play-by-play descriptions of the action. But it is possible that those broadcasters may not physically be inside the gymnasium at the time of the game.

“We have the ability to have our broadcasters call a game from our studio,” he said. “We have done that in the past and it has worked really well.”

Some of the basketball games may only feature a video feed without any commentary by announcers, Grant added. All games featuring announcers will be free to the public. Those games featuring video only will be for subscribers only on whou.live. A subscription for that service costs $10 per month or $85 per year.

In addition to the County games, Dale Duff will handle all of the Bangor High School games, along with a number of other games in the greater Bangor region. Hockey games involving County teams played at locations such as Old Town/Orono, Hampden Academy and John Bapst also will be featured.

Grant said the response from area schools to allowing video cameras into their gymnasiums was overwhelmingly positive. Hodgdon Middle-High School actually went above and beyond by building a “Hawk’s Nest” area near center court for a cameraperson.

“Schools were very excited,” Grant said. “It really began back during graduation and continued on to soccer season. Every AD we have talked with has been thrilled that we are able to stream games.”