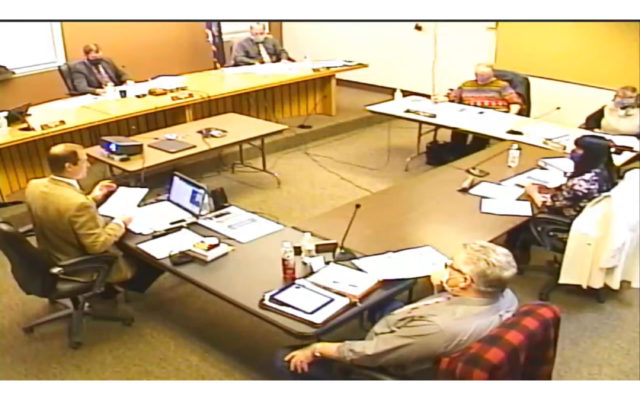 Goughan, who was elected for an additional term shortly before sending the letter to the city manager and his fellow councilors, returned this year for his new term. In his letter, he said that he was resigning due to missing the required amount of committee meetings a councilor needs to attend under the city charter.

Most of Goughan’s statements during the Jan. 11 meeting were inaudible, as he placed his microphone on the floor in front of his desk and pointed it toward the wall just before the meeting officially started.

Newly elected Councilor Courtney Boma made the motion to end the investigation near the end of the meeting, which was seconded by new Councilor Lou Willey.

Councilor Joan Theriault said she would also like to see the investigation come to an end, as resignation letters are public documents. She added that the document was also not introduced during an executive session, and was sent as an email from Goughan to City Manager Dennis Marker and his fellow councilors before the meeting.

“I think it’s a waste of money,” she said of the investigation. “Simple as that.”

“We have a problem,” he said. “It didn’t get out there by itself. If you want to talk about wasting money, then we can talk about frivolous things like lawsuits, but with $5,000 all of a sudden there’s an issue. I think it’s important.”

Morrell concluded that he will personally not attend another executive session held by the council until the matter is resolved.

Willey said that in her previous line of work, she had to deal with numerous executive sessions in addition to public documents, and that a letter of resignation is absolutely a public document.

“We can go and nitpick this, but I think it’s important to remember that it’s done,” Willey said. “I think Mark’s letter was very eloquent. There was nothing wrong with it, there was nothing that was offensive in any way, and spending money to find out who supposedly leaked it is just a waste of money.”

Willey said she can’t even go grocery shopping without people asking her about what’s going on with the city council, adding that the resignation investigation is “the very first thing they bring up.”

Morrell said these are weak excuses, and that the council has the power to determine if a document is confidential or not.

“What if it was business? What if it was something else? If I was that business and that got out, I would’ve mounted my attorneys to come after everyone on this council,” he said.

Councilor Thomas Ayer agreed with Morrell and said he believed the council has the power to decide if a document is confidential.

Theriault said that while the discussion about what to do about the resignation was executive session material, the letter itself was not, as it was already out before the council held the meeting.

Ayer said if the council votes to end the investigation, then Marker should provide him every single email that has gone through the city server for the last five years.

“As a councilor,” he said, “I’m entitled to that. If the city server is public, that means anybody can come in here and get emails through the Freedom of Access Act, correct?”

Marker said anybody could obtain any emails sent on the server, unless they are deemed confidential under state law.

Willey said that public officials are constantly told to be careful about what they post in an email, as that information could be used in a court case.

“However the minute Mr. Goughan sent that letter out, it became a public document,” she said. “Anyone could walk off the street and say ‘we would like to see Mark Goughan’s resignation letter.’ It’s a public document. We don’t get to decide when something is or is not public.”

Ayer asked if this meant that real estate transactions or labor negotiations should also be public, and Willey said these are two different things.

Ayer disagreed, and said that just because something hits the city server, people do not have a right to determine if it’s public or private.

“This council has that right, not anybody else,” he said.

Willey reiterated that labor negotiations and real estate transactions, unlike a letter of resignation, would be confidential documents. Ayer said he was just making a comparison, and that the letter was likely leaked because people wanted to exploit the situation.

“We’re not only seeing this here, but we’re seeing it across the nation,” he said.

Marker said he recently had discussions with attorneys from the Maine Municipal Association and Mayor Jody Smith regarding the resignation letter.

“The very clear direction is — the council as a body does not have the right and the power to declare something confidential if it is a public document under the state statute,” Marker said of his talks with the attorneys.

He said that while there are some provisions that would deem a document confidential, the attorneys were very clear in saying that a letter of resignation is a public document.

The city manager said that while any members of the public can request public documents, they would need to be reviewed by a city employee who would determine if any sensitive information needed to be redacted.

The council ultimately voted 4-2 to drop the investigation, with councilors Ayer and Morrell opposed, councilor Goughan abstaining, and councilors Boma, Willey and Theriault in favor with the mayor splitting the vote in the affirmative.