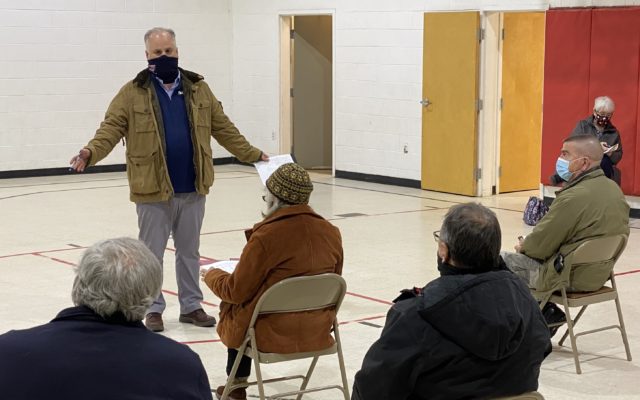 Alexander MacDougall • January 22, 2021
Towns across southern Aroostook met at the Oakfield Community Center on Thursday, Jan. 21, to discuss possibly forming their own ambulance service after Houlton announced substantial increases in rates for towns looking to use theirs.

OAKFIELD, Maine — Towns across southern Aroostook met at the Oakfield Community Center on Thursday, Jan. 21, to discuss possibly forming their own ambulance service after Houlton announced substantial increases in rates for towns looking to use theirs.

Representatives from all southern Aroostook towns, with the exception of Houlton, attended the meeting. The purpose of the meeting was to discuss whether the towns should continue with ambulance contracts, or look into forming their own ambulance service under a consortium of 14 towns, which make up the southern Aroostook region.

“No matter how you slice it, the numbers are going to go up,” Dale Morris, the town manager for Oakfield, said. “It’s disappointing that Houlton’s not here, but that was their call.”

Marian Anderson, the town manager for Houlton, said the town did not attend because of COVID-19 regulation concerns, and that Houlton had already discussed the rate increase individually with many of the towns that were attending Thursday’s meeting.

“I think we’ve been very responsive to the questions,” Anderson said. “Those communities have to do what’s best for those communities. It’s part of the process, and we understand that.”

Previously, southern Aroostook towns were paying a rate of $16.47 per capita for ambulance services from Houlton. Under the 2021 budget, that rate has now been increased to $74 per capita. That means the towns will be paying significantly higher ambulance contracts for the new year.

The hikes in ambulance rates mirrors that of recent actions taken by the town of Caribou, which has also begun charging substantial increases to surrounding townships, such as Connor, causing them to seek alternative options.

Island Falls already has its own ambulance service, though representatives from the town were present at the Jan. 21 meeting and expressed interest in being part of a wider consortium.

Stewart provided estimates for how much each town would have to pay in order for an ambulance service to be formed based on borrowing a $1 million loan in order to start a service with three vehicles, along with purchasing all the necessary equipment to serve the 14 southern Aroostook communities.The cost would come to around $146 per capita for each town to contribute, Stewart said.

“If we pay that back in a year, we’re going to know if we need a little help in the second year,” Stewart said. “By the third year, we should be out so we shouldn’t have to be back again. It should be self-evident that we’re going to operate and we’ll be able to operate under the funding that the ambulance takes in.”

The meeting concluded with the towns all expressing a mutual interest into looking into forming their own ambulance service, with a committee to be formed at a later date to report back to each of the towns regarding any proposed plan to start a new service.

Next year's Caribou City Council will include a new member and a longtime councilor thanks to Tuesday's election.
Pets END_OF_DOCUMENT_TOKEN_TO_BE_REPLACED

I know many of you have followed DeeDee’s story. DeeDee had leukemia and was under vet care for the past few weeks. Early one recent morning, she lost her battle with leukemia.
What's Happening This Week END_OF_DOCUMENT_TOKEN_TO_BE_REPLACED