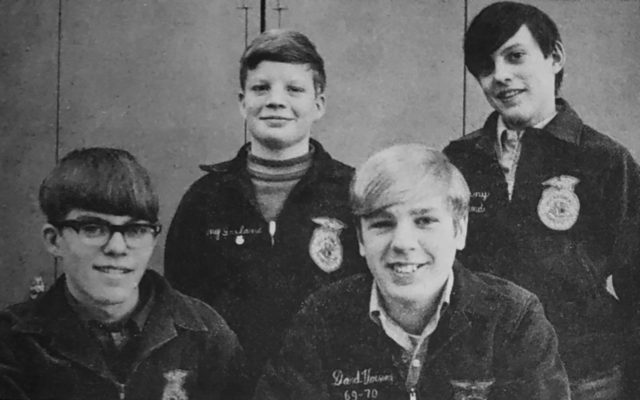 Yvonne Tardie • January 28, 2021
75 Years Ago -  Jan. 24, 1946 James White to attend teachers college in Conn. -- James White, son of Mr. and Mrs. Maurice White of this city, received his honorable discharge from the U.S. Army after nearly four years service, including one and one half years in the ETO.

James White to attend teachers college in Conn. — James White, son of Mr. and Mrs. Maurice White of this city, received his honorable discharge from the U.S. Army after nearly four years service, including one and one half years in the ETO. Mr. White planned to take a course at the Connecticut Teachers College in New Britain and he and Mrs. White and their young son, Jimmy, left for West Hartford where they planned to reside.

Aroostook War Chest achieved 65 P.C. quota — The Aroostook County War Chest had to date achieved 65 percent of its quota, according to a report of President Arthur Putnam of Houlton. Mr. Putnam stated that the amount achieved was $29,104.45 on the $46,000 goal established for the combined National War Fund agencies and Boy Scout drive in the 1945-46 drive.

Returns home and joins firm — Captain Fred N. Beck arrived home after receiving his honorable discharge papers at Mitchell Field. He assumed his duties as junior member of the legal firm of Beck and Beck. Capt. Beck entered the Air Corps on Oct. 15, 1942, and was commissioned a second lieutenant at Miami. He received his first Lieutenancy while at Wright Field, Dayton, Ohio.

Educators rated SAD 1 tops by state level — If necessary, the City of Presque Isle and School and School Administrative District No. 1 had no problem in acquiring a man of quality for the position of superintendent, according to Kermit S. Nickerson, deputy commissioner of Education for the State of Maine. Nickerson said that if the position was open, he was certain that a large number of well-qualified applicants would be heard from almost immediately. He said School Administrative District No. 1 was, if not the largest, among the largest districts in the state and was considered a plum by men in this field.

Local youth wins $5,000 cash award — As a result of his father’s visit to a local snowmobile dealer, a seven-year-old Presque Isle resident was the recipient of a $5,000 cash award. Ricky Kervin, son of Mr. and Mrs. Chester Kervin of Reach Road, received word of his success from the Canadian snowsled company which was awarding $5,000 every day except Sunday until Feb. 6. Kervin went with his nephew from Houlton to Carroll’s Auto Sales where the nephew was going to buy a snowmobile. Kervin was given two tickets, according to Mrs. Kervin, by T. R. Smith of the company to take home for her to fill out. With never a thought of even possibly winning, Mrs. Kervin completed a ticket for each of her two boys. The boys agreed that if one did, on the off chance, get the money that he would split the $5,000 with his brother.

County firm awarded a $6.3 million project — The Caribou firm of CJP Associates was awarded a $6.3 million contract for the renovation of 10 Job Corps Center buildings and the construction of an additional building at the Loring Commerce Centre. The announcement was released in a joint statement from Sens. Bill Cohen and Olympia Snowe as well as Rep. John Baldacci. The firm CJP is a combination of County Electric, J.P. Martin & Sons Construction Corp. and Industrial Heating & Piping Co. Bud Anderson, president of County Electric, said the three companies came together in order to have the financial resources necessary to submit a bid on the job.

TAMC taps technology for a new educational tool — The Educational Services Department at The Aroostook Medical Center implemented a traveling computer program to increase educational awareness among hospital personnel. The computer, named “Chip,” is equipped with a number of computerized educational programs to instruct on such topics as clinical management, chemotherapy, medical terminology, cardiac emergency, body mechanics and 12 lead ECG. “Chip” is also equipped to prep nurses for training on Advanced Cardiac Life Support (ACLS), a mandatory educational requirement. This new system allows nursing staff to fulfill educational requirements and prep for training while on the job. “Chip” will travel to different departments to allow all staff the opportunity to work with it.