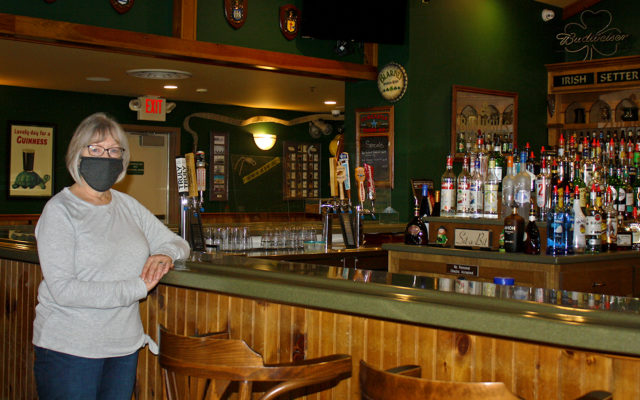 Contributed • February 12, 2021
When Deborah Gustin was hired as the general manager of the Irish Setter Pub soon after its 2006 opening, she had no idea that only two years later she would become its owner.

PRESQUE ISLE, Maine — When Deborah Gustin was hired as the general manager of the Irish Setter Pub soon after its 2006 opening, she had no idea that only two years later she would become its owner.

“I learned that the owners planned on selling and a lady from the bank suggested that I try to buy it,” Gustin said. “So I talked with Northern Maine Development Commission and Katahdin [Trust Company] and here I am.”

As the owner of the only Irish-themed bar and restaurant in northern Maine, Gustin has worked to keep customers returning while offering unique menu items and a friendly atmosphere.

Over the years she has seen the restaurant’s Irish reuben sandwiches, burgers and nachos become popular menu items, as well as the pub-style drinks. Guests also enjoy the Presque Isle artifacts and Irish-themed photos and decorations.

Most of all, Gustin has seen the restaurant and bar become a place where folks can catch up with old friends, make new friends or just enjoy each other’s company over good food and drinks.

“People always see somebody they know when they come in here,” Gustin said. “I’ve seen people come back because of the friendships they’ve made at the bar.”

Gustin is no stranger to the restaurant business. Her father, Norman Marquis, worked as a chef for restaurants in Boston, Bar Harbor and other places along the Maine coast. When embarking on her own journey as a business owner, she remembered his lessons about recognizing the importance of all employees’ work and always valuing customer feedback. 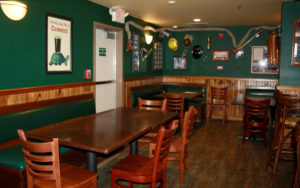 The Irish Setter Pub has become a popular destination for restaurant goers in Presque Isle since opening 15 years ago. (Melissa Lizotte | The Star Herald)

In 2015, Gustin saw her hard work pay off when she received the Small Business Administration’s Woman-Owned Business of the Year award. She said that both the formal and word-of-mouth recognition from customers has contributed to the pub’s reputation among Maine residents.

“One of my former cooks lives in Bangor and every time he wears his Irish Setter Pub cap someone will say, ‘I’ve been there,'” Gustin said. “It’s good to know that even people outside the area enjoy coming here.”

Today, the Irish Setter Pub has 23 employees, including 15 who work as bartenders and servers and seven who are part of the kitchen staff. Gustin noted that one of the biggest challenges of the past 15 years has been finding employees to remain in the business long term.

“It’s hard to find people who want to make bartending or serving into a career,” Gustin said. “These jobs are often a step up for people in college or who need to make extra money.”

But she considers herself fortunate to have built strong relationships with many longtime employees as well as regular customers. Even as the COVID-19 pandemic continues to limit indoor dining spaces and increase reliance on take-out orders, Gustin has been grateful for those who have kept her work days busy.

As she looks to the future, she has begun to think about when she might retire and give someone else a chance to own the pub. For now, though, she looks forward to guiding her business through the challenges and successes that lie ahead.

Gustin said she has learned many lessons over the years, and shared some advice for aspiring restaurant entrepreneurs.

“Be prepared to work hard and make sure you listen to your people,” Gustin said. “Take things one day at a time and don’t be afraid to reach out for help when you need it.”