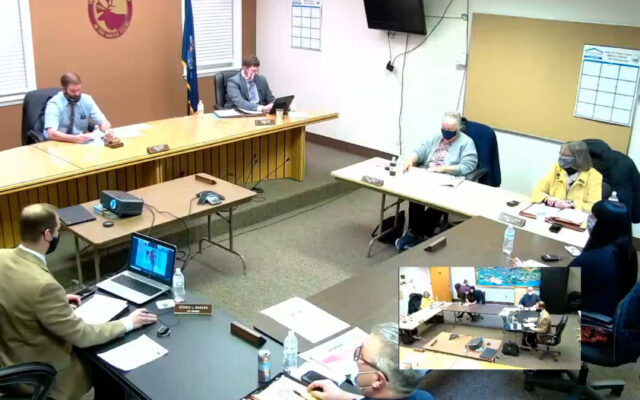 CARIBOU, Maine — Caribou City Council will consider declaring the city a Second Amendment Sanctuary during its next regular meeting March 8. The designation would mean the city would only follow the Second Amendment of the U.S. Constitution, which protects people’s rights to keep and bear arms among other things, and not acknowledge state or federal gun laws.

Caribou Councilor Joan Theriault asked why the city was even considering the declaration.

“It’s very simple,” Councilor Thomas Ayer said. “You look at what is happening to our gun rights in this country and our gun rights across Maine,” adding that northern Maine towns like Fort Fairfield are making a statement to groups like the Maine Gun Safety Coalition.

Ayer said he was also concerned about yellow flag laws, as they would take the right to own guns from anyone declared mentally unstable.

“I could go in and say ‘Courtney’s lost her mind. You need to take her guns.’ And a judge will sign that and our police force has to go in and take those firearms,” Ayer said.

The law, which was passed on July 1, 2020, would require an assessment from a medical professional that an individual is “found to present a likelihood of foreseeable harm” to themselves or others. If this diagnosis is reached, law enforcement would be notified and seek endorsement from a judge to ensure that their weapons are removed for up to one year. The court can extend the period for an additional year if the judge thinks the person still is a danger.

Ayer added that metal detectors should be put in the city’s schools.

“We’re already screening for COVID — that doesn’t take any more time than a metal detector would,” he said. “Let’s use the technology that we have, and instead of spending all this crazy money down in Augusta or in Washington, or sending money overseas, start investing in Americans and the safety of our children.”

Councilor Lou Willey asked Ayer why he would mention bringing metal detectors to schools if it would mean potentially taking a gun away from someone, as that would conflict with the Second Amendment text: “Every citizen has the right to keep and bear arms and this right shall never be questioned.”

She said it would amount to the city questioning that individual’s right to carry a weapon, and asked what the city should do in that situation.

“We’re questioning their rights when we say you can’t carry into the capitol buildings,” Ayer said.

Willey asked if this declaration would mean that the city can no longer prevent people from bringing weapons into certain places.

“What we’re saying is, when it comes to the grand scheme of things, coming in and taking our firearms, any sort of magazine restriction — we’re saying you can’t do it,” he said.

Theriault said she had read that sanctuary cities don’t have any actual power to not follow gun laws, as the federal law would supersede the municipal law.

“Does it? Because if you go to San Diego it doesn’t,” Ayer said. “ICE wasn’t allowed into San Diego.”

Willey clarified that San Diego is a sanctuary city for immigrants, not the second amendment.

Morrell said he is “150 percent” behind the movement.

“I won’t give into the government and the left-wing mobs down there with their theories of how they’re going to have a utopia in this country,” Morrell said. “I have a second [amendment] right and I’m gonna keep it.”

He commended Fort Fairfield for being the first in Aroostook to make the declaration.

“Most people up here are hunters, and are smart enough to understand that with one chink in the door, one slip of paper in that door and it’ll be a landslide in, and it won’t just be the second amendment,” he said.

Ayer was receptive to treating the discussion as a first read, and Morrell reiterated his support for the declaration. He said that while there may be good intentions behind gun control legislation, he does not believe it will prevent any shootings or violence.

“It’s not going to stop the criminals,” he said, “never has and never was. And what would I put up against that as proof? Look at the drug battle. We spent billions — with a “B” — and haven’t made a dent in it. The road to Hell’s paved in good intentions, but taking away somebody’s right? I can’t see that happening. I think that’s one of the catalysts for the whole country to go in a very rough spot if they attempt to do that.”

Councilor Mark Goughan, who attended via Zoom, said he was in favor of becoming a sanctuary city, but did not add any further comments.

Councilors Theriault, Boma and Willey said they were not ready to vote on the matter, and asked if it could be treated as a first read. And while the other four councilors were in favor of the declaration, they agreed that the others should be given more time to look into the matter.

“I think it’s smart,” Ayer said. “I would rather have everybody’s questions be answered. That way everybody has a fair basis. Gun legislation shouldn’t be something that gets crammed down people’s throats and just expected to be done. It takes everyone to really come together and think common sense stuff.”

City Manager Dennis Marker said perhaps some language could be added to the resolution to clarify the city’s intent, and Mayor Jody Smith said he would allow everyone an opportunity to conduct more research and potentially change some of the wording before returning to the next regular meeting on March 8.

Recently we took in a cat named Joe. He is a very sweet cat with a multitude of problems. He was rescued from the streets here in town, but Joe turned out to be a very sick kitty and was surrendered to The Ark because the resources were not there to help him.
What's Happening This Week END_OF_DOCUMENT_TOKEN_TO_BE_REPLACED