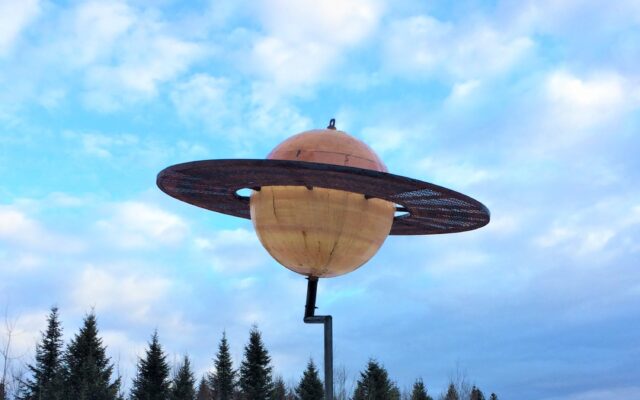 They come in search of planets and moons

Kathleen Phalen Tomaselli • March 3, 2021
Perhaps it is the pull of the great beyond, that place of stars, moons and planets that draws them closer, draws them to Maine for a chance to travel from Jupiter to Mars to Pluto. And for the most adventurous, the journey through the solar system can be completed in a day, maybe two, especially if taking in a few dwarf planets as well.

PRESQUE ISLE , Maine — Perhaps it is the pull of the great beyond, that place of stars, moons and planets that draws them closer, draws them to Maine for a chance to travel from Jupiter to Mars to Pluto. And for the most adventurous, the journey through the solar system can be completed in a day, maybe two, especially if taking in a few dwarf planets as well.

“More tourists are coming up here by a wide measure to see it,” said Kevin McCartney, a geology professor at the University of Maine at Presque Isle about the Maine Solar System Model. McCartney has coordinated the project since its inception in 1999. “I’ve had people come here and say it is the best in the world.”

This off-beat educational attraction, spanning nearly 100 miles along U.S. Route 1, from the 50-foot diameter Sun at UMPI to the dwarf planet Eris in Topsfield, just got a boost with a $7,500 enterprise marketing grant from the Maine Office of Tourism Marketing Partnership Program for promotional materials.

“We are so pleased to receive this MOT support for the Maine Solar System Model, given its significant impact on local tourism,” Debbie Roark, UMPI Executive Director for University Advancement and External Affairs, said. “As a community, we are excited to increase visibility and awareness of the model across our state and beyond, by providing a new interactive website and increased promotional efforts.”

Created in 1999 as a nearly all-volunteer effort, the to-scale model is the largest in the western hemisphere, and the second largest such model in the world. And according to McCartney, for the past 20-something years, it has been created and maintained with little or no money.

“Community organizations and businesses have also shown continued support by assisting in the movement and refurbishment of planets,” McCartney said, adding that Saturn is currently out of orbit for refurbishment. “This is a community project in every sense of the word.”

Given the scale of this three-dimensional model — one mile equals one astronomic unit or the nearly 93 million-mile distance from the Earth to the Sun — a person traveling at seven miles per hour would be moving at the speed of light.

Established by UMPI and the northern Maine community, the Maine Solar System Model was built as a community project, with all materials and labor donated. Volunteers included a consortium of 12 schools and hundreds of businesses and individuals throughout northern Maine.

According to Roark, the grant allows UMPI to develop new photography, a promotional video, interactive website, advertising on social media and a new brochure. As part of the grant, UMPI is partnering with many Aroostook organizations, including Aroostook County Tourism, Northern Maine Development Commission, Aroostook Partnership, and Greater Houlton Chamber of Commerce.

In collaboration with the Central Aroostook Chamber of Commerce, the new brochures developed will be distributed to all 62 chamber offices across Maine and be placed in the four Maine Visitor Centers and kiosks in Kittery, Yarmouth and New Hampshire.

“The Maine Solar System Model is a very unique tourism attraction in that it hasn’t been impacted by COVID-19. It’s a naturally socially distanced activity and it allows families and individuals to tour and engage in a safe way,” Roark said. “It has become an incredibly special tourism destination for so many people over the years and we’re excited to extend this offering to a wider audience.”

For the first time since 2019, there is competition for open seats on the Houlton Town Council
Pets END_OF_DOCUMENT_TOKEN_TO_BE_REPLACED

We hope everyone enjoyed a wonderful holiday season and is looking forward to the new year.  December was a busy month at the Central Aroostook Humane Society with so many people and businesses bringing in much-needed supplies and monetary donations, which help us to take care of the special temporary pets in our care.
What's Happening This Week END_OF_DOCUMENT_TOKEN_TO_BE_REPLACED