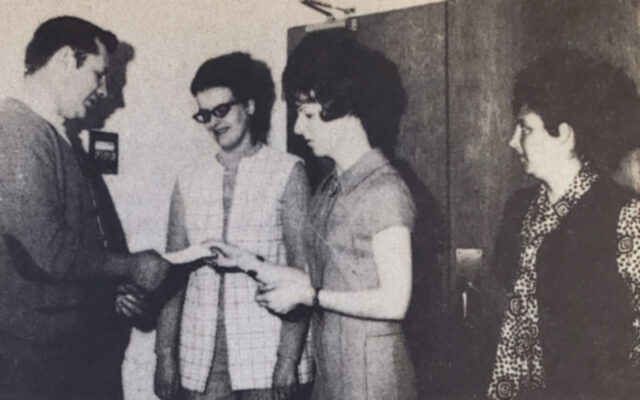 Promoted to Lieutenant — Miss Helen Louise Boyle, of Presque Isle, was elevated to the rank of Lieutenant, Commander in the Nurse Corps of the U.S. Navy. The daughter of Mr. and Mrs. Vincent Boyle, she was stationed at the Naval Dispensary at Seattle, Washington. Lt. Commander Boyle served in England during the Normandy invasion.

New shippers secretary — Herbert W. Moore, of Boston, was named executive secretary of the Maine Potato Growers and Shippers Committee and took over the duties of that office. A lieutenant colonel in the Air Corps, Moore was stationed at this Base for three years.

Dr. Boone honored — Dr. Storer W. Boone was honored by the Presque Isle community at the 26th Annual Chamber of Commerce Dinner Meeting held at the Northeastland Hotel March 17. Mellen Fitzherbert, retiring chairman of the Live Wire Club of the local Chamber, made the presentation. Dr. Boone was cited for his many contributions to the welfare of the community during a nearly fifty-year medical practice in Presque Isle. A native of Presque Isle, the son of the first surgeon to serve the area, Dr. Boone studied medicine in McGill University School of Medicine in Montreal, Canada, graduating in 1919.

Mapleton man cited — A Mapleton man earned top honors in the Prudential Insurance Company’s Academy of Honor, according to Thomas Allsopp, senior vice president in charge of the company’s Northeastern Home Office. Raymond Levesque, who lived on Waddell Road, Mapleton, was cited for his special achievements. Levesque, a sales manager, who was honored as a Medalist of the company’s elite Academy organization. Membership in the Academy is based on professional accomplishments in the sale and service of life and health insurance during 1970.

Funding for assistance program — James E. Baillargeon, director of special services for the Aroostook County Action Program (ACAP), announced that ACAP received nearly $1 million in funding for the 1995-96 Home Energy Assistance Program (HEAP) and had issued $700,000 in benefits. HEAP provides financial help to eligible low income households to offset the high costs of home heating. ACAP special Services continued scheduling appointments for those wishing to apply for HEAP. According to Baillargeon, funding had been drastically cut and resulted in some changes in the program.

Tungol joined psychiatric staff at AMHC — Dr. Dinah Tungol of Presque Isle joined the staff of Aroostook Mental Health Center as a staff psychiatrist, serving all of AMHC’s service area in central and southern Aroostook. Her office was based at the Presque Isle AMHS Outpatient Clinic on Edgemont Drive. Since 1991, Tungol provided psychiatric services to AMHC on contract. Her new position formalized her association with AMHC and increased her ability to provide services to AMHC consumers.

County sold spuds to USDA — The United States Department of Agriculture bought 8 million pounds of potatoes, a large portion of which came from The County. Rep. John Baldacci announced the federal purchase March 15. Two local potato distributors, Agway Inc. of Presque Isle and Northeast Potato Distributors Inc. of Monticello, were the ones supplying 95 percent of the potatoes. The rest came from Alsum Produce Inc. of Friesland, Wisconsin. The purchase of 160,000 cases of round white potatoes for donation to child nutrition, charitable institutions and other feeding programs that cost the USDA over a million dollars. All but nine of the approximately 200 potato truckloads ordered were supplied by the chosen Maine potato distributors.