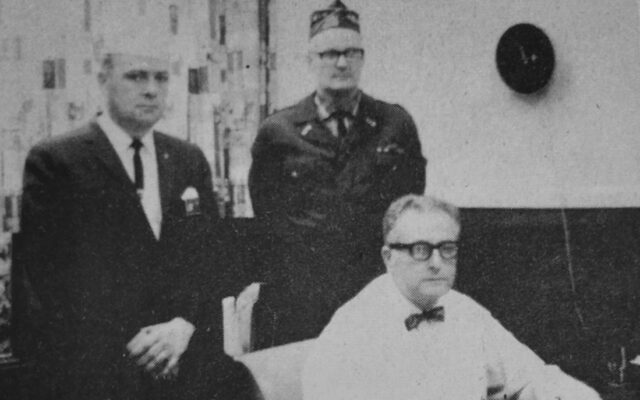 Yvonne Tardie • April 28, 2021
75 Years Ago -   April 25, 1946 Rotarians add two members to the roster -- Members of the Presque Isle High School basketball team and Coach William Hanscom, were guests of the Rotarians at their luncheon and meeting.

Rotarians add two members to the roster — Members of the Presque Isle High School basketball team and Coach William Hanscom, were guests of the Rotarians at their luncheon and meeting.

Two new members were taken in: Harold K. Graves, Mortician, and George J. Brown, Contract Potato Grower. The program was under the direction of George Barnes. All badges were exchanged and several members were called upon to speak on the classification as represented by the badge each had received in exchange for his own. This resulted in some very humorous three-minute talks. Visiting Rotarians were Norman Johnson and Rex Miller, Caribou; David M. Peat, Augusta; W. E. Woodman, Washburn; Junior Rotarian, Oscar Nelder. Other visitors were Arthur Hawkins of Orono and Cecil Frutchey of Dover Foxcroft.

Cpl. Dana Hunter received honorable discharge — Cpt. Dana J. Hunter was honorably discharged at Fort Devens, Mass., April 16, and arrived Monday afternoon at the home of his parents, Mr. and Mrs. Alfred Hunter, in Presque Isle. A graduate of Presque Isle High School in 1942, Mr. Hunter entered the service of the U.S. Army in 1944 and received his training at Camp Chaffee, Ark., and was stationed at Fort Knox,, Ky., prior to going overseas where he served 15 months in the ETO with the 4th Armored Division. He was stationed in Passau, Germany, during the previous six months.

Women plan Lebanese meals — Annually, members of the Presque Isle branch of the American Association of University Women celebrate the coming of spring by entertaining their husbands (or a friend) at a gourmet dinner. The previous year was French, and the current year was Lebanese. It was held at the home of Mr. and Mrs. Robert Waldron, Presque Isle. Mrs. Charles Hurst and Mrs. Forest Ayer had worked for weeks planning the menu. They had been helped by many people from the Caribou area, particularly Mrs. Nelson Sleeper and Barbara Waken, who was born and educated in Lebanon. The committee had sent authentic Lebanese recipes to all members so that each member could contribute to the meal.

Libby was included in “Who’s Who” — Loren L. Libby, a student of mental health technology at Midlands Technology at Midlands Technical Education Center, Columbia, S.C., was included in the 1970-’71 edition of “Who’s Who Among Students in American Junior Colleges.” This honor was conferred annually upon outstanding student leaders from over 600 junior colleges in the United States. In selecting candidates, campus nominating committees chose students whose academic standing, service to the community, leadership in extracurricular activities and future potential were above average. Libby, a native of Mapleton and a graduate of Presque Isle High School, resided in Columbia, S.C., with his wife, the former Trudy Chandler of Mapleton, and their son, Troy.

Members of the Houlton Band of Maliseets will head to the ballot box in order to determine who will be elected as their new tribal chief.
Pets END_OF_DOCUMENT_TOKEN_TO_BE_REPLACED