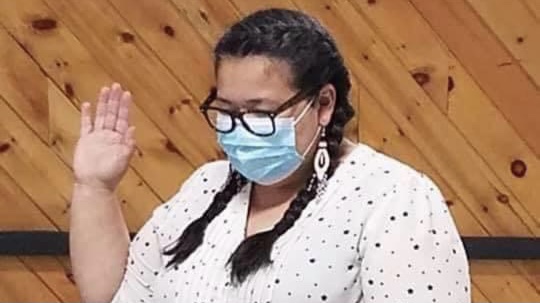 Alexander MacDougall • April 29, 2021
Clarissa Sabattis was re-elected to serve another four-year term as chief of the Houlton Band of Maliseet Indians, after a campaign facing off against former Maliseet Chief Brenda Commander.

HOULTON, Maine — Clarissa Sabattis was re-elected to serve another four-year term as chief of the Houlton Band of Maliseet Indians, after a campaign facing off against former Maliseet Chief Brenda Commander.

Sabattis defeated Commander by a vote of 163 to 89, a larger margin of victory than when the two faced off four years ago, in which Sabattis won by only two votes. Members elected to the tribal council were Beth Aucoin, John Flewelling and Crystal Tucker. While the election was held on Saturday, April 24, the voting results were not officially verified until Tuesday.

“I’m really happy that I’m going to be around for another four years, to continue a lot of the work that I’ve invested so much time and energy into,” Sabattis said regarding her election victory.

The end of Sabattis’ first term was marked by the start of the COVID-19 pandemic, and the challenges associated with making sure tribal members are tested and vaccinated. Sabattis, who has a background in nursing, said she hopes to continue that work into her second term.

“We started with the vaccines early on because our population is one of the highest at-risk for succumbing to this [virus] or having complications,” Sabattis said. “But we’re still trying to have a push to get vaccinated. There are still some people that are still hesitant because this is something that’s new.”

Other efforts include establishing a mobile clinic for tribe members who live outside of Houlton, and ensuring that buildings are properly ventilated to avoid the spread of the virus indoors.

But as vaccines continue to get into the arms of citizens nationwide and the pandemic begins to ease, issues of tribal sovereignty will again be at the forefront, Sabattis said. Central to this is overcoming the hurdles of the 1980 Maine Indian Claims Settlement Act, a federal law that limits the autonomy of Maine tribes compared to other tribes across the country.

“A lot of my focus is going to be working on sovereignty issues and self-governance, both at the state and federal levels,” she said. “That’s something that I have been doing and kind of slowed down during COVID. Some people might not see the importance of that, but if there are changes made to allow us to restore rights so that we really are functioning and exercising our authority, it’s only going to strengthen our tribe and community.”

Rep. Joseph Underwood, R-Presque Isle has been appointed to serve on the Legislature’s Agriculture, Conservation and Forestry Committee.
Pets END_OF_DOCUMENT_TOKEN_TO_BE_REPLACED