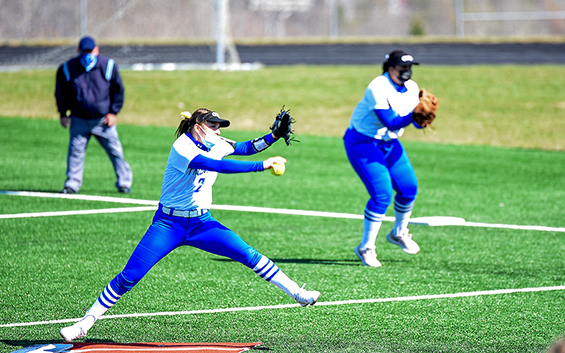 While breaking the four-year drought, the team swept their opponent, setting a new school record for NCAA wins in a row with 12 straight wins. The weekend left the Owls 13-7 overall and 12-4 within the NAC.

Fifth-year senior captain Sarah Duncklee of Kearney, Arizona, said, “Our team has always had such a great support system even though we are typically on the road, so we are beyond thankful for the support the community brought to our first home games in four years, and all the hard work that was put into making it happen. It was beyond exciting to not only sweep this past weekend at home, but also making it our team’s longest program winning streak.”

Typically, UMPI travels south to play in Orono or Bangor to host home events in the spring. This year they practiced on their home field at Presque Isle High School until a late April snowstorm made the field unplayable.

The UMPI Athletics Department collaborated with other departments on campus and the SAD 1 Athletics Department, and the team worked to create a temporary softball field at the Gehrig Johnson Athletic Complex at Presque Isle Middle School. UMPI created a temporary backstop and outfield fencing to host the Hornets for the four-game weekend.

“It was very special getting to share this past weekend with my teammates and coach. So many people helped us make those games happen. I am so blessed to be a part of the UMPI athletic department and the great people involved,” said senior captain Melanee Terry of Moreno Valley, California.

“UMPI and Presque Isle is a special place where everyone works together for the betterment of their community and is always willing to go above and beyond to support one another. A special thank you to everyone that helped out this weekend to make this possible for our softball team,” Executive Director of Athletics and Recreation Dan Kane said.

Only two current members of the UMPI team were associated with the team the last time UMPI hosted a home game: fifth-year senior captain Delanie Strout of Greene and second-year head coach Alissa Edwards, who at that time was a player.

“Games have been great in general, but it is different when you get to play on your home field,” Strout said. “It felt great to have the people who have supported us for years on the road finally be able to see us play in person.”

“It was very special being able to share such a moment with all of the girls and our amazing UMPI community. The amount of time and work put in to make these games possible was incredible,” Edwards said. “The girls and I are so thankful to everyone who helped and made it possible.

Members of the Houlton Band of Maliseets will head to the ballot box in order to determine who will be elected as their new tribal chief.
Pets END_OF_DOCUMENT_TOKEN_TO_BE_REPLACED