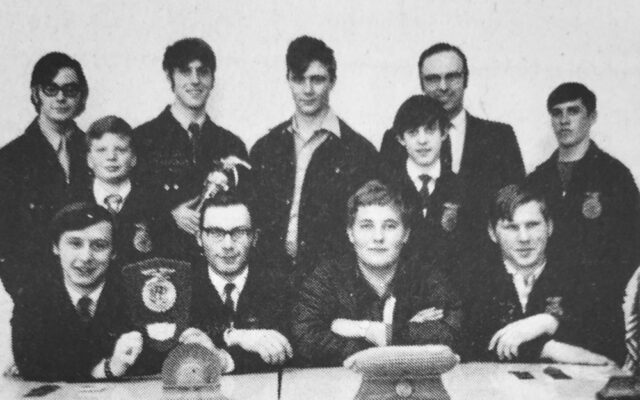 Yvonne Tardie • May 19, 2021
75 Years Ago -   May 16, 1946 Weaver named mutual agent -- Dana Weaver was appointed life underwriter for New England Life Ins. Co. of Boston and located in the McGlauflin Block on Main Street in the office of Lloyd Greenlaw. He graduated from Presque Isle High School, class of 1938, where he was appointed in public speaking and athletics.

Weaver named mutual agent — Dana Weaver was appointed life underwriter for New England Life Ins. Co. of Boston and located in the McGlauflin Block on Main Street in the office of Lloyd Greenlaw. He graduated from Presque Isle High School, class of 1938, where he was appointed in public speaking and athletics.

He served three years as flight engineer in the Air Transport Command, all of which was spent flying the North Atlantic, Greenland, Iceland and Labrador. Mr. Weaver studied insurance for the previous year in Boston, Massachusetts.

Flag presentation — Ray Smart, director of the Presque Isle Housing Development, received a flag on Monday, May 11, from members of the Presque Isle Business and Professional Women’s Club. The flag, purchased by Florence Halfkenney, was to be flown in front of the new office of the Housing Development on Birch Street. The presentation was made in honor and memory of Miss Sue Valentine Thompson, who helped found the local club some 40 years prior. Miss Thompson was a firm believer that the flag should be honored at all times.

D. L. Campbell returned to The County — The Rev. D. L. Campbell, born in Dunntown in 1894, the son of Charles and Winefred Campbell, returned to the county after spending most of his life in other parts of the United States. The Rev. Campbell left Aroostook County at the age of 18 to attend a Boston college and seminary. He had served as pastor of churches in Massachusetts, Rhode Island and Los Angeles. He was elected secretary-treasurer of a Home and Foreign Mission Society and served as a national evangelist, working with pastors from coast to coast. He and his wife Florence, who had been a soloist and choir director, were active in radio ministry, three years in Los Angeles, nine years with the Boston Station WMEX, three years with other stations in other cities.

United Way elected officers, board members for 1996-97 — United Way of Aroostook members elected new board members and officers for 1996-97. Elected to serve as officers of the board of directors were President Alan Dunn, Vice President Robert Tardiff, Treasurer Peter Cannan and Executive Secretary Susanne Sandusky. Elected to three-year terms on the board of directors were Fred Bustard of Presque Isle, Lynn Lombard of Caribou, Carl Savage of Fort Kent, and Michael Young of Presque Isle. Also serving on the board were: Erin Benson and Corey Brown of Caribou; Freeman Corey of Presque Isle; Betty Ann Childers, Marguerite Lawler, and Denis Grenier, all of Houlton: Allen Sterling of Washburn and Russell Erwin of Westfield.

Receiving award — Dick Durost, principal of Presque Isle High School, received a handshake and $25,000 from Michael Milken, co-founder and board member of the Milken Family Foundation, at a May 4 ceremony in Los Angeles. Durost was among four Maine educators and nearly 150 educators from across the country who gathered at the Century Plaza Hotel to accept the Milken Educator Awards and to attend a three day professional development conference on “Technology in Education.”

Members of the Houlton Band of Maliseets will head to the ballot box in order to determine who will be elected as their new tribal chief.
Pets END_OF_DOCUMENT_TOKEN_TO_BE_REPLACED
6 days ago