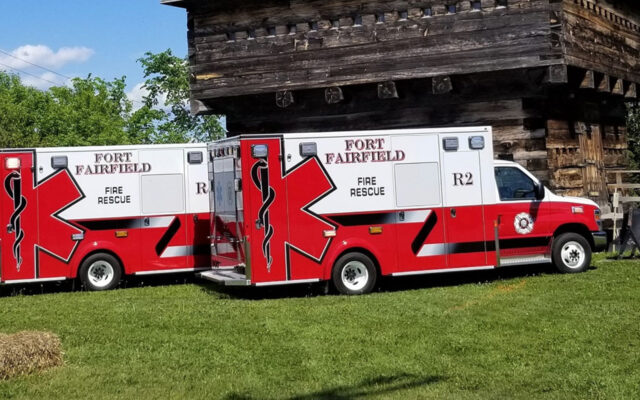 Kathleen Phalen Tomaselli • June 3, 2021
After months of grappling with taxpayer concerns related to town spending on the new ambulance service, the Fort Fairfield Town Council will vote on the municipal FY 2021-2022 budget on June 17.

FORT FAIRFIELD, Maine — After months of grappling with taxpayer concerns related to town spending on the new ambulance service, the Fort Fairfield Town Council will vote on the municipal FY 2021-2022 budget on June 17.

And a grassroots taxpayer group is hoping their requests for the town council to trim spending and keep EMS expenditures flat for the coming year will appear in the final approved version. If not, the group is prepared to gather the required 355 or 15 percent of registered voter signatures to bring the budget to a referendum vote.

Nonetheless, Town Manager Andrea Powers contends the town will not be able to meet the rising costs of EMS replacement drugs and insurance without the proposed $292,041 increase.

The new ambulance service was unanimously approved with little taxpayer opposition in late 2019, after months of discussion and input from towns and cities like Presque Isle. As planned, the emergency services department is now fully functional as a combined fire and EMS service with all firefighters also trained as paramedics.

There are currently six paid employees along with volunteer firefighters.

From Jan. 1 to May 31, there have been 212 EMS calls and 53 fire calls, with revenues for the coming year projected at $257,700. Although getting paid for their service is a rougher road. The town has received one $800 payment and they are waiting for additional payments already billed, Powers said.

“The Fire Rescue Department works with a billing service that specializes in medical billing,” Powers said. “There is a fee schedule that many services use throughout the state. These calls are submitted to insurance companies for billing and we are able to collect a certain percentage of the amount billed. The percentage collected depends greatly on insurance company agreements and Centers For Medicaid/Medicare Services decisions.”

Additionally, the town also welcomes discussions with other town’s regarding their service, Powers said, adding that costs would be involved in the discussions.

“I was called by Fort Fairfield today. The town manager actually offered help if we were short-staffed,” Troeger said, adding that Powers told her she has some staff who could work extra shifts because they are well staffed. “So I said, ‘send their resumes, we’ll put them on our part-time [list], if we can give them a shift, we’d love to have more.’”

In May 2019, the town’s contract with Crown Ambulance ended after the two were unable to come to a contract agreement for ambulance service to the town. During early discussions regarding establishing a town-based combined fire and EMS, several town councilors said it would take several years to develop the service and realize a profit.

“A lot of people are very concerned as to what this will do tax wise. I completely understand that. People are not convinced that this is going to generate revenue,” Town Councilor Melissa Libby said. “In a five-year time frame, it should pay for itself. There should not be, that I can foresee, a big need to increase the taxes.

“This is very progressive thinking. This is something that maybe comes across as very scary for our small town that isn’t used to a lot of change,” Libby continued. “It is a big deal, but it’s something that is going to benefit us and hopefully bring businesses into town … People need to open their minds and look at all the aspects of this versus this is going to just raise my taxes.”

“This is what I did for a living for 40 years, so I understand this is needed,” Smith said in 2019. “I am not worried about the expense. You are going to get revenues back. Are you going to break even? I don’t think so. Bill collecting is tough. It’s going to be hard … It’s a service that we need and from what I have heard, it’s what the people want. I haven’t heard any negativity.”

During the 2019 discussions about the service, only a handful of residents were present with only two speaking about the issue during the meetings: one in favor of the service and one opposed.

But now that last year’s taxes increased nearly 28 percent for some property owners following a town-wide revaluation and another increase is looming this year, some taxpayers are questioning the merits of a town-based EMS service. During several town council meetings starting in January, taxpayers have asked council members to hold spending, some posing alternatives to purchasing new fire and EMS equipment.

“At the core of this, residents are worried about how their tax dollars are being spent, and whether their taxes will increase again in the near future,” property-owner and resident Kevin Pelletier said during the March meeting. “Fort Fairfield is a poor community. Did we really need to buy two new ambulances? We could have shopped around and bought used to save money.”

The FY 2020-2021 town budget included a $937,830 increase to accommodate the new service that Powers said was covered by a 15-year note, unanimously approved by the council in December 2019.

This year, the draft budget includes another $292,041 increase for Fire and EMS expenses and the taxpayer group is asking the town council to reject the proposed increase along with holding several other line items in administration and recreation flat.

“We are proud of the hard work done by the taxpayers and the council throughout the winter,” Taxpayer Group of Fort Fairfield member Sharon Ouellette said last week. “Now is the moment of truth for the council. But the buck stops here, with the taxpayers.”

The final budget hearing is at 6 p.m. June 3 in the Fort Fairfield Community Center and the town council vote is slated for 6 p.m. June 17.

Members of the Houlton Band of Maliseets will head to the ballot box in order to determine who will be elected as their new tribal chief.
Pets END_OF_DOCUMENT_TOKEN_TO_BE_REPLACED