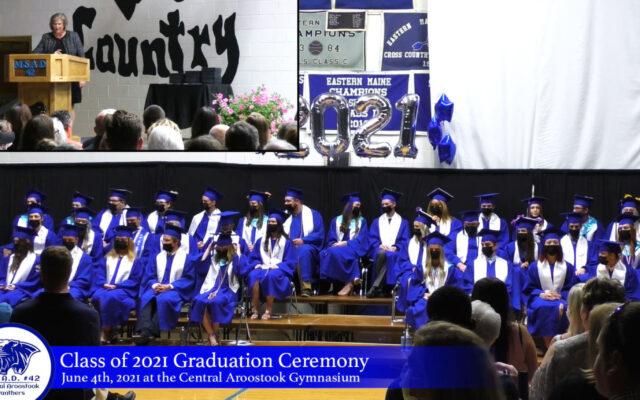 Kathleen Phalen Tomaselli • June 7, 2021
The 37 graduates of the Central Aroostook High School Class of 2021 left the school gymnasium after being declared officially graduated on Friday night carrying candles lit from one to another, candles of hope and new beginnings.

MARS HILL, Maine — The 37 graduates of the Central Aroostook High School Class of 2021 left the school gymnasium after being declared officially graduated on Friday night carrying candles lit from one to another, candles of hope and new beginnings.

“Don’t base your future on what you think others want from you,” Valedictorian Maddison Coffin said to fellow classmates during the graduation ceremony. “Don’t sacrifice your dreams because you think others won’t approve. Pursue what makes you happy because in the end, it’s your life.”

In a ceremony attended by family and friends that was also live streamed, speakers shared memories, some dating back to first grade, inside jokes like the mention of “Brent’s leather suit,” inspirational quotes and keys to success like “be kind” and “never lose sight of your dreams.”

There were also reminders of a senior year altered by COVID-19, reminders of attending class from bedrooms, of masks and quarantines and the prom that almost wasn’t. But throughout it all, they persevered and as Senior Class President Hudson Bradbury said, “it was the best year of his life.” 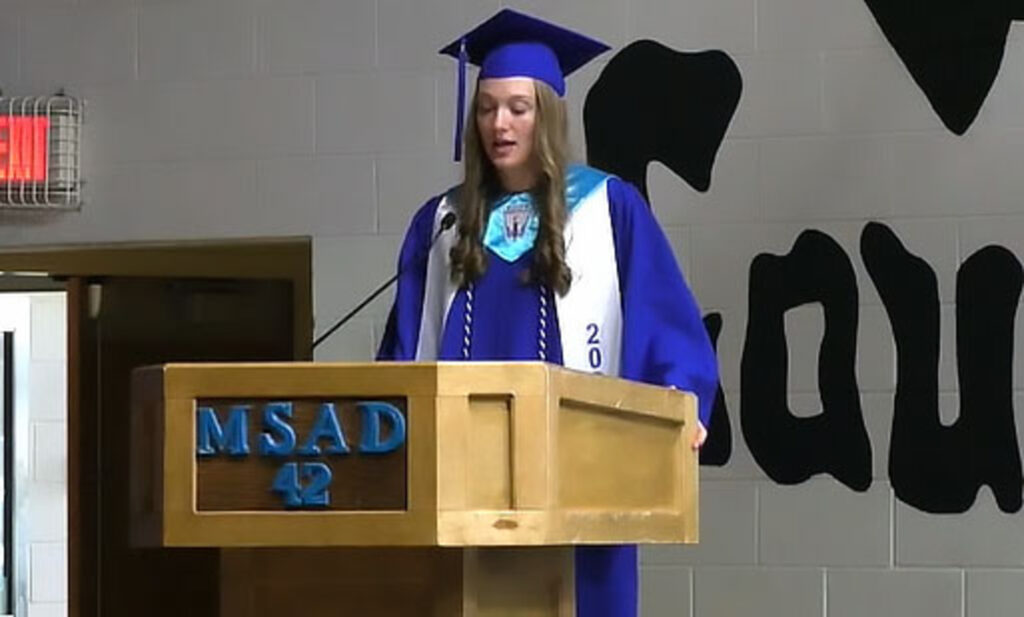 Some graduates are heading off to college, some to trade schools and others to new jobs or offbeat adventures. And Coffin pointed this out during her message to fellow classmates.

“Success isn’t based on how well you test in a class or how you can write an essay with perfect grammar,” Coffin said, adding that academic perfection is overrated. “Success is not universal. It’s different for every single person.”

Coffin was presented with an honor award and plaque by Principal Kay York. Throughout Coffin has been a part of the math team, soccer and softball teams and the National Honor Society while at Central Aroostook High School, York said.

“She earned numerous academic honors and awards and achieved highest honors throughout each quarter of high school and is a recent honor cord recipient. She has volunteered for Catholic Charities and the Senior Planning Center. Maddison plans to attend the University of Maine to study biology.

The Central Aroostook High School Class of 2021 graduated on Friday June 4, 2021. Senior Class President Hudson Bradbury said this past year has been the best year of his life. (Screenshot from graduation livestream)

First grade memories from Principal York included personal messages to several graduates who were in York’s first-grade class when she was teaching.

“Libby, you were always full of energy and smiling, which makes perfect sense since your middle name is Joy.”

“Landon, you loved social studies, especially learning about Egypt. You would read all sorts of books and then come in and tell me what you had learned.”

“Alex, you always had a story to tell me. Sometimes I think there could have been a little exaggeration going on.

“Josh Thomas, sorry you had your aunt as a teacher and principal, so you couldn’t get away with much over the years.”

“It was a sight to behold,” York said.

The class theme this year was B212, York explained.

“At 211 degrees water is hot, very hot. But at 212 degrees it boils,” she said. “And with boiling water comes steam and with steam you can fuel something as powerful as a train.One extra degree makes all the difference.”

While talking about the pandemic year, York said it required everyone to give that one extra degree effort as they navigated uncharted waters.

And she closed her remarks to the graduating Class of 2021, just as she had opened, with a story.

“You may liken this past year to one where you felt like a whole truckload of dirt was dumped on your senior year and buried it … you can take a different perspective,” she said.  “A farmer plants a seed and covers it with dirt. Did he bury the seed? Yes he did, but we would say the seed was planted … I challenge you, Class of 2021, to look on this past year as one that made you stronger and helped you to grow and get ready for your next stage of life. I look forward to seeing you bloom where you are planted.”

Members of the Houlton Band of Maliseets will head to the ballot box in order to determine who will be elected as their new tribal chief.
Pets END_OF_DOCUMENT_TOKEN_TO_BE_REPLACED
7 days ago