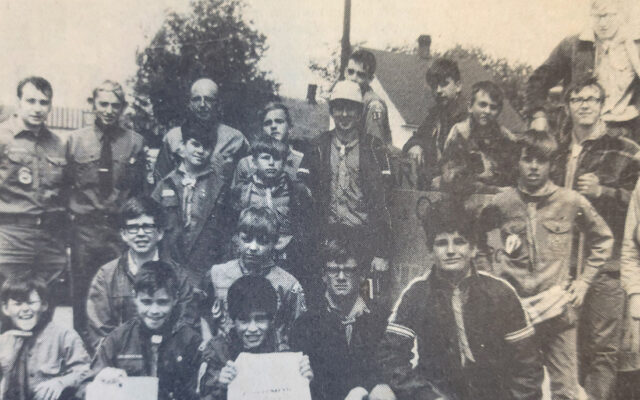 Following the commanding officer’s recommendation, “Technical Sergeant Wilfred L. Saucier, 2014-665, FA, 243rd Field Artillery Battalion, while serving with the Army of the United States, distinguished himself by meritorious service in connection with military operations against an enemy of the United States. In that time, during the period of August 6, 1944 to March 30, 1945, Sergeant Saucier served as personnel sergeant of his battalion, which was in combat continuously.

Completed course at St. Elizabeth College — Mary Elizabeth Hayes, daughter of Mr. and Mrs. Albert A. Hayes of Presque Isle, graduated with a bachelor of arts degree from the college of Saint Elizabeth, Convent Station, New Jersey, June 6 and commencement exercises were held in the Greek Theater on the campus. Miss Hayes, who transferred from Aroostook State Normal School to St. Elizabeth’s in her junior year, was extremely active in extracurricular activities. As a member of the dramatic association, she took roles in three plays. She was also a member of the Glee Club, associate editor of the Pelican, the college newspaper, and was invited to give the Three Planting Oration for her class.

Mars Hill skier — The Harry Baxter Trophy, for the most improved skier on the University of Maine at Farmington Ski Team, was presented to Rodney (Rod) Lawrence of Mars Hill, a sophomore at UMF, by Patrick (Pat) Mouligne, ski school director at Sugarloaf Mt. The presentation was made at a recent UMF Men’s Athletic Awards banquet.

Veteran counselor honored — Arthur M. Bennett of Presque Isle, a member for two, six-year terms of the Maine Fish and Game Department’s Advisory Council, more as vice chairman, was awarded a plaque of merit for his contribution to the Council’s activities. The presentation was made by Fish and Game Commissioner George W. Buckman and Councilor Reginald L. Parker of Bath. Bennett represented Washington and Aroostook counties.

Cited for November bravery — A Presque Isle resident received a New England Telephone Company citation for bravery for his actions in helping to evacuate occupants of a burning motel back in November. Timothy C. Randolph, a journeyman splicer with the company, was honored at a luncheon May 28 in the Veterans of Foreign Wars Hall in Millinocket. Presenting the citation was Raymond H. Frost, the company’s general manager of the state. The heroic acts for which Randolph and four fellow employees were honored took place Nov. 18 while they and three other employees who were working in the area were housed temporarily at the Heritage Motel in Millocket.

New Fort Fairfield town manager — When Fort Fairfield Town Manager Scott Seabury left his post in February, he painted a somewhat gloomy picture. In fact, he even said he didn’t envy the person picked to take his place, but he did wish him luck. Seabury’s successor didn’t appear to be worried about some of the issues facing the town which is home to the Maine Potato Blossom Festival. Rather, he seemed to embrace the challenges, felt comfortable moving to the town, and aimed to utilize his relevant experience and education in his new role. Eugene J. Conlogue, current Washburn town manager, was appointed to the Fort Fairfield position, assuming his new role as soon as possible. Gary Cyr, chairman of the Fort Fairfield Council, said the five-member council conducted the search themselves from a total of 18 applicants.

FreshWay loaned $500,000 more — The Northern Maine Development Commission’s overall board approved an additional $500,000 loan for the FreshWay processing plant in Mars Hill, bringing their total loan amount to $1.5 million. At the annual overall board meeting at the Caribou Inn and Convention Center, a quorum voted to increase NMDC’s involvement in the future potato processing plant to $1.5 million, according to Executive Director Bob Clark. The most recent loan replaced an earlier $250,000 loans to be used for the construction of an office.

Members of the Houlton Band of Maliseets will head to the ballot box in order to determine who will be elected as their new tribal chief.
Pets END_OF_DOCUMENT_TOKEN_TO_BE_REPLACED
7 days ago