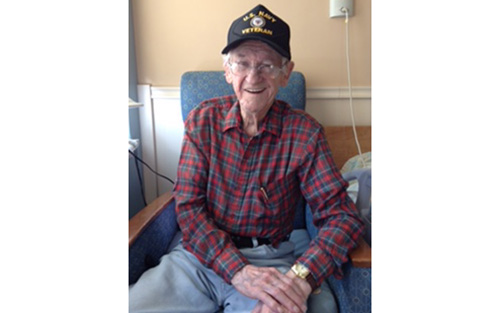 U.S. Navy veteran is one of Caribou’s biggest supporters

Contributed • June 10, 2021
Joseph Bouchard always has and always will love Aroostook County. He grew up in Caribou as the oldest of eight brothers and sisters, with a 24-year gap between Joe and the youngest.

CARIBOU, Maine — Joseph Bouchard always has and always will love Aroostook County. He grew up in Caribou as the oldest of eight brothers and sisters, with a 24-year gap between Joe and the youngest.

As the oldest, Joe got a job when he was a teen to help support the family. He bagged groceries at a local market and worked at Hall’s, a clothing store in town.

He was also busy as a student-athlete at Caribou High School, where he played basketball and baseball. In his junior year, however, he decided to leave school to enlist in the U.S. Navy. It was the end of World War II, and Joe’s desire to serve just couldn’t wait. He even inspired four of his brothers to join the military just like he did; his brother, Dale, joined the U.S. Navy, and brothers Dick, Rob and Gary served in the U.S. Army. 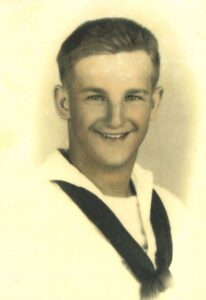 Joseph Bouchard, who served in the U.S. Navy, is the May Veteran of the Month at Maine Veteran’s Home – Caribou. (Contributed photo)

While on a stopover in Japan, Joe ran into Dale, who was serving on a Naval destroyer; Joe had been serving on an aircraft carrier, the U.S.S. Antietam. Joe also ran into a few of his buddies from Caribou while serving overseas, proving that it is a small world, indeed. A photo of him and his friend currently hangs in the local Caribou VFW.

Seaman First Class Bouchard served as a deckhand and ammunition loader. He also organized athletic events for his fellow servicemen when their ships were in port. Some of his most memorable times in the military were birthdays.

“We all raised hell on birthdays,” he said. “We were in port, and all of my mates chased me down this hill, and well, I went flying.”

After two years in the service, Joe came back home to Caribou and worked in the same grocery store where he worked as a teen. He also finished high school and earned his diploma. He married his wife, Ruby, and started a family; he has two sons, Michael and Gregory, who are considered among his most significant accomplishments.

“My two beautiful boys,” he said.

The Beginning of a Successful Career

Joe went to school to be an accountant and started his career at Northern National Bank at Dow Air Force Base.

His son, Michael, remembers visiting his dad there in an office he built himself.

“I was seven years old, and my mother and I had just visited my godmother in Washburn to pick up our new puppy, Susie. We drove out to the base to show dad,” Michael recalled.

The Caribou community has always meant much to Joe: he served a term on the city council, was vice mayor, was an extremely active Jaycee with the Junior Chamber of Commerce, even served as the organization’s national president for a term. Later, he served as an Exhausted Rooster (another tier of the organization).

When Joe was 59, he was approached to run County Federal Credit Union in Caribou, which he did with as much passion and vigor as he put into all of his projects. Additionally, he twice served as president of the Maine Credit Union League.

“All young people should get involved in their community,” Joe said. “It’s really important to be involved.”

Joe’s son, Michael, joined the U.S. Navy, just like his dad. Michael served 22 years and retired in 1996. His father and step-father both attended his retirement ceremony in Norfolk, Virginia.

“He was very proud,” Michael said of his dad.

Now a resident at Maine Veteran’s Homes – Caribou, Joe loves to listen to Big Band music and write letters on his typewriter to his sons and to the local newspaper.

Joseph Bouchard has been named May Veteran of the Month at MVH Caribou. Thank you for your service, Joe.

Members of the Houlton Band of Maliseets will head to the ballot box in order to determine who will be elected as their new tribal chief.
Pets END_OF_DOCUMENT_TOKEN_TO_BE_REPLACED