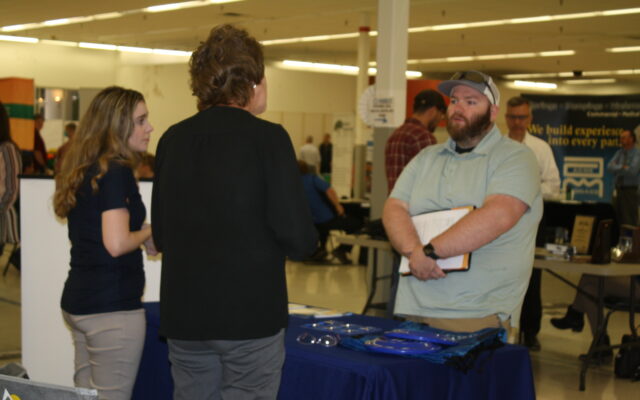 Melissa Lizotte • June 23, 2021
The first post-COVID job fair in The Star City brought out more than 30 employers and dozens of potential employees, all looking for the same thing: the right people for the right jobs.

PRESQUE ISLE, Maine — The first post-COVID job fair in The Star City brought out more than 30 employers and dozens of potential employees, all looking for the same thing: the right people for the right jobs.

On Wednesday, the former Kmart location at the Aroostook Centre Mall was filled with booths advertising a variety of jobs, such as those in manufacturing, insurance, health care, social services, banking, food services and retail.

Job fair coordinator Heidi Ouellette noted that the event, hosted in collaboration with the Presque Isle Career Center, Aroostook County Action Program and Central Aroostook Chamber of Commerce, was needed more than ever due to the array of job openings becoming available during the pandemic.

“It’s not one specific industry that’s struggling to find people. Everyone has openings,” said Ouellette, an employment and training specialist for the Career Center.

For those who have been seeking new work during the pandemic, many have felt their options limited due to career centers only offering online services, Ouellette said. Others are now seizing the opportunity to chat with employers face to face and learn how they could take steps toward a new career.

Jack Westfall of Limestone said that after gaining experience in office administration, he is now looking for a long-term career in management.

“I want a career instead of a job, something that I could stay in for a while,” Westfall said.

During the job fair, Westfall was able to chat with employers from many industries and find out more about whether certain jobs might suit him. He credited the job fair for opening up more opportunities for in-person conversations.

“I’m glad they were able to put on something like this,” Westfall said. “I think [during the pandemic] it’s been a little harder to find what I’m looking for.”

The easing of pandemic restrictions has led many people to seek work again after devoting time to family due to the closure of daycare centers and remote learning situations, noted Ouellette.

Jessica McLaughlin, who moved her family to Presque Isle from Old Town several months ago, said that she felt encouraged by the variety of companies present at the job fair. As a single mother of three, she was looking for work with flexible hours.

“I’m pretty much open to anything. Having kids can make it harder to find certain jobs,” McLaughlin said. “It’s been helpful to come here. I found some good resources to look into.”

Like the job seekers themselves, local employers are dealing with their own difficulties in matching jobs to employees.

Breanna Naples, Section 28 supervisor for Northern Lighthouse, Inc, said that the mental and behavioral health agency has part-time and full-time openings in all departments, including those in case management, children’s services and administration.

She noted that even prior to the pandemic, it was not uncommon for social service agencies to have many job openings, especially in support positions that do not require college degrees.

“A lot of our staff are high school graduates or college students in [programs like] education and social work who want experience working with kids,” Naples said.

For other employers, the pandemic and a national shortage of qualified employees have combined to make workforce recruitment even more difficult.

Christopher Cyr, director of risk management for St. Agatha-based RF Chamberland, said that the company has struggled to fill truck driver positions despite never having been closed for business during the pandemic.

“We need long-haul truck drivers. There are at least four or five trucks that are open right now,” Cyr said.

He also said that the declining youth population in Aroostook and a lack of interest in truck driving among young people might also be playing a role. By attending the job fair, he hoped to possibly find applicants with the right amount of experience and interest.

“We’re busier than we’ve ever been, but it’s harder to find workers than it has ever been,” Cyr said.

For the first time since 2019, there is competition for open seats on the Houlton Town Council
Pets END_OF_DOCUMENT_TOKEN_TO_BE_REPLACED