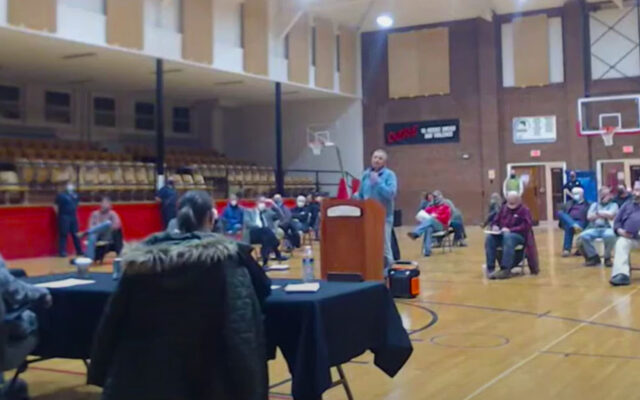 By Kathleen Phalen Tomaselli, Special to The Star-Herald

Last Thursday, June 24, the Fort Fairfield Town Council approved in a 4-to-1 vote the highly contested FY 2021-2022 town budget, with Councilor Scott Smith dissenting. And on Friday, July 2, a group of Fort Fairfield townspeople — the Petitioner’s Committee — began referendum proceedings to amend four items in the municipal budget. After six months of wrangling with town officials and the town council, taxpayers are frustrated and angry that their concerns and requests to hold down spending have been ignored with the passage of this budget.

“I didn’t vote for the budget because it is $331,000 short of being balanced,” Smith said, adding that he also did not approve last year’s budget because there was an addition of $1 million in revenue with no explanation. “Where are we going to come up with $331,000 this year?”

Additionally, Scott said an eleventh-hour change in the EMS services revenue from $257,000 to $408,000 makes him suspicious.

And now, with 451 notarized signatures – nearly 100 more than the required 353 — the Petitioner’s Committee filed the petition with the town clerk at 9:10 a.m. on Thursday morning, requiring the town council’s reconsideration and amendment of the town budget after the town clerk certifies the signatures.

The four-item petition removes increases from the budgets for administration, fire/EMS and recreation, leaving these budget amounts flat from the previous year. It also specifies that no new money will be allocated to any reserve account in the budget.

“We the people who live in this small farming community may have old-fashioned values and appreciate simpler ways, but we are not backward in our understanding of money,” Jim Ouellette, one of five petitioners, said. Ouellette has lived in Fort Fairfield with his family for the past 50 years. “The Council can stand with the taxpayers by removing the increases in this budget along with the huge pending tax hike, or the voters will have to make the decision for them.”

Ouellette and his wife Sharon Ouellette are among a growing group of longtime Fort Fairfield residents who are questioning dramatic budget increases in EMS services for the second year in a row, as well as unexplained EMS revenue increases and budget shortfalls that Town Manager Andrea Powers has said on several occasions will fall on taxpayers to make whole.

“We can plainly see the bottom line in this budget: A deficit of $331,000. We also see the additional $110,000 assigned to property tax within the budget, as well as the magical appearance of an extra $150,000 in projected ambulance income just the day before the Council budget vote,” Ouellette said, referring to EMS projected revenues. “We also painfully know what a property tax bill will look like that has to cover a $591,000 shortfall.”

The “elephant in the room,” as it is commonly referred to by townspeople, is the costly ambulance service, the largest share of municipal expenses, at more than $1.4 million total budgeted cost.

Councilor Smith, who worked in fire and EMS for 35 years, said he sees ways of doing things less expensively as he points to the nearly $4 million already spent on the new service.

“One can force citizens to pay for a $1.4 million ambulance budget or 32 percent increase over last year, on the threat that otherwise we will not have service at all. One can postpone allowing people to know the mill rate until September or claim that the expenses are only up 1 percent,” Sharon Ouellette said. “One can say that we are being charged $35 per capita for ambulance service, when the cost is actually over $300 …The council needs to do the hard work and get expert help to make adjustments in the costs for these important services. You simply can’t just ‘put lipstick on the pig’.”

The town clerk must certify the signatures by comparing them to the Fort Fairfield registered voter list within five days, according to the town charter. Then the town council has the option to adopt the amendments to the town budget or reject the petition. If the town council rejects the budget amendments, a special town election must be scheduled within 14 days from the date of certification.

“The budget has gone up $2 million since Andrea Powers became town manager,” Dana Morrow said, adding that the new town ambulance service is going to bankrupt the town. “Because EMS and fire is gobbling up so much money, nothing else in the town gets done.”

Morrow, who builds golf courses around the world including one in Dubai for pro golfer Greg Norman, owns several properties — his residence, a farm, a gravel pit and an old service station — in Fort Fairfield.

“I don’t usually speak up about these things, but while I was out on my tractor, I just started to boil all day long,” he said, adding that it is his time to speak up, especially for the older townspeople who can’t afford these increases. “If we don’t do something [about EMS], next year it will be another million … The EMS is a hungry albatross, it is insatiable.”

For the first time since 2019, there is competition for open seats on the Houlton Town Council
Pets END_OF_DOCUMENT_TOKEN_TO_BE_REPLACED