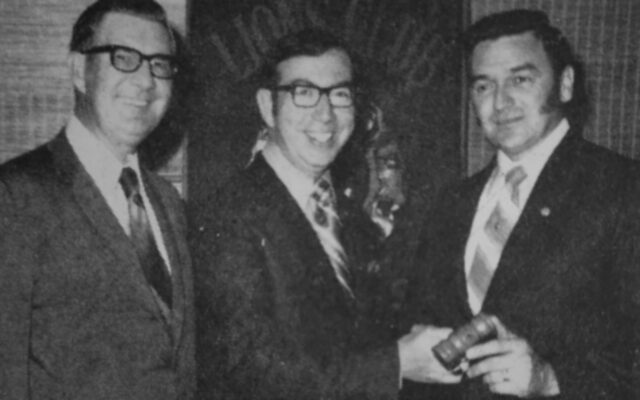 Yvonne Tardie • July 21, 2021
75 Years Ago -  July 18, 1946 Aucoin is Maine Maritime graduate -- Among the 101 graduates of the Maine Maritime Academy at Castine, receiving Ensign’s commissions June 29, was Leonard L. Aucoin, son of Mr. and Mrs. Luby Aucoin of 271 State St. of this city. Ensign Aucoin was born in Presque Isle and attended the local schools.

Aucoin is Maine Maritime graduate — Among the 101 graduates of the Maine Maritime Academy at Castine, receiving Ensign’s commissions June 29, was Leonard L. Aucoin, son of Mr. and Mrs. Luby Aucoin of 271 State St. of this city. Ensign Aucoin was born in Presque Isle and attended the local schools.

At the end of his junior year in high school, he applied for enrollment in the Maritime Academy and was accepted for the class beginning in September 1944. During his two years of study, he followed the engineering courses. Leonard was one of Bill Hanscom’s basketball stars while at Presque Isle High School and carried on his athletic activities at the Academy, making the varsity basketball team and the class football and softball teams.

Westfield boy received promotion — Boyd A. Lunney, son of Mrs. Susan Luney of Westfield, was promoted to sergeant while serving at Sub-Base R., on Luzon, 80 miles south of Manila with the Headquarters Company. Sgt. Lunney had been in the Philippines nine months and was assigned to the bse control section where he was responsible for drafting cargo, shipping, and tonnage graphs showing the daily progress of the base transportation service.

Father Feeney was given testimonial — The various committees working with general chairman William J. Mackin formulated plans for a testimonial for the Rev. Daniel J. Feeney in honor of his elevation to the Bishopric. The event was staged at the Presque Isle High School auditorium.

Presque Isle man promoted — Gary P. Beaulieu, son of Mr. and Mrs. Antone N. Beaulieu, Presque Isle, was promoted to Army lieutenant colonel while serving with the 8th Infantry Division near Bad Kreuznach, Germany, in the capacity of assistant chief of staff, logistics, headquarters. Col. Beaulieu held the Bronze Star Medal, eight awards of the Air Medal, the Distinguished Flying Cross and the Vietnamese Gallantry Cross with Palm for 350 combat hours. The awards were presented at the 8th Division Headquarters in Germany. Beaulieu earned the Distinguished Flying Cross while he served as commander of a recovery mission in Vietnam.  Also presented during the ceremony were the Bronze Star and the air medals. He had earlier received the Vietnamese Cross of Gallantry by the South Vietnamese government. The colonel graduated from Presque Isle High School in 1952 and from the University of Maine, Orono, in 1956 with an ABA degree.

MSAD No. 32 principal participated in a summer program — Lynwood L. McHatten, principal, elementary schools in SAD 32, was selected to participate in a four-week summer program sponsored by the Professional Improvement for Elementary School Principals project, one of fourteen Model Progress for Educational Improvement operating in Maine under Title III of the Elementary and Secondary Education Act. The program, enrolling 25 selected elementary school principals across the state, was conducted at the new Thomas College campus in Waterville. McHatten had been a principal in SAD 32 for six years. He and his family resided in Masardis.

Flewellings named farm family — It may have been the first time the Flewelling family had been named Outstanding Farm Family of the Year, but it wasn’t the first time they had received notoriety for their farming operations. Four years prior, CNN, based in Atlanta, visited the Easton family and ran about a 3-minute segment on hand-picking potato crews. That in turn brought CBS News and eventually the Wall Street Journal. And despite that national attention, the family was just as pleased with their local farming honors. Moreover, the Maine Potato Blossom Festival Committee and the Farm Family of the Year Selection Committee announced that the Viola Flewelling family with sons Gaylen and Jerry were selected to receive the Outstanding Farm Family honor. As part of the honor, the 49th annual Maine Potato Blossom Festival was dedicated in their honor and they were recognized at the annual industry dinner. The Flewelling family farming business spanned back over six generations.

Eagle Scout recipient — Paul Sellars, a junior at Washburn High School, was awarded the rank of Eagle Scout at a ceremony held on May 11, 1996. Paul is the son of Tony and Ginny Sellars.Paul began his trail to Eagle Scout as a Cub on Nov. 3, 1986, going through the six areas of advancement, ending with the Arrow of Light on April 2, 1991. He earned a wide variety of extra awards as well as 19 badges and pins, and awards in conservation and religion in his Cub Scout years. Paul represented the last member of Cub Pack 162’s first Tiger Cub group to complete the trail to Eagle Scout. As a Boy Scout, Paul earned 40 merit badges as well as several additional awards, and had held over a dozen leadership positions and attended a variety of regional and national Scouting events. The Scouts of Troop 177 of Washburn, of which Paul was a member, had 20 boys on the Eagle Honor Roll. All these have been under the leadership of Scoutmasters Herman Nevers and Larry Harrison.

Members of the Houlton Band of Maliseets will head to the ballot box in order to determine who will be elected as their new tribal chief.
Pets END_OF_DOCUMENT_TOKEN_TO_BE_REPLACED