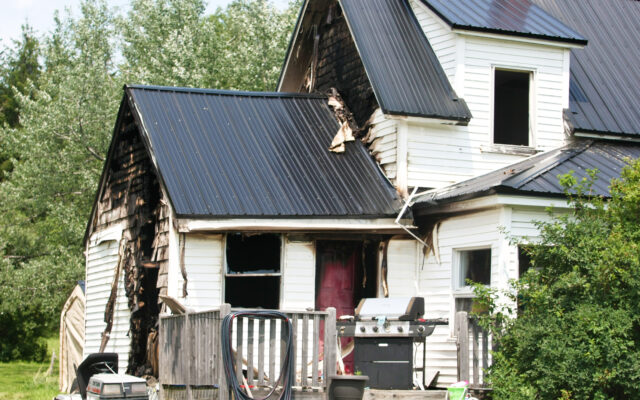 Joseph Cyr • July 26, 2021
A family of four was able to escape their home after a brief, but powerful storm Monday morning ignited a fire at 170 Wotton Road in Monticello.

MONTICELLO, Maine — A family of four was able to escape their home after a brief, but powerful storm Monday morning ignited a fire at 170 Wotton Road in Monticello.

Homeowner Mike Soule was alone at the property sifting through the wreckage Monday afternoon and also keeping an eye on the home to ensure that no flare-ups erupted.

Soule said his wife Veronica was home with their two children Monday morning when their home was believed to have been struck by lightning around 9 a.m. The storm passed through southern Aroostook County bringing heavy rain and thunderstorms for about 45 minutes.

“She knew it was raining and a storm was coming,” Soule said. “Then the bulb in the living room lamp blew up and the whole house shook. Her first reaction was to get the kids to the bathroom away from windows.”

When his wife started to investigate, she noticed smoke billowing from underneath a door leading from the kitchen to the back porch of the home. She opened the door to check and found the entire back part of the house was erupting in flames.

“At that point she screamed to the kids to get out of the house,” he said.

Mike Soule was just starting his shift at Freightliner of Maine when Veronica called to let him know and he immediately left work. Upon his arrival, Soule said numerous firefighters from Monticello and Littleton were on the scene and the entire back of his home was engulfed in flames.

Soule said he was able to rescue the family’s two pets, a rabbit and cat, before the fire spread. Although much of the home is standing, he said the inside received extensive smoke and water damage.

“The Monticello Fire Department did a great job,” Soule added.

The home was not insured at the time of the fire and most of the family’s belongings were damaged. The family plans to temporarily relocate to Mike’s mother and father-in-law’s home.

For the first time since 2019, there is competition for open seats on the Houlton Town Council
Pets END_OF_DOCUMENT_TOKEN_TO_BE_REPLACED

We hope everyone enjoyed a wonderful holiday season and is looking forward to the new year.  December was a busy month at the Central Aroostook Humane Society with so many people and businesses bringing in much-needed supplies and monetary donations, which help us to take care of the special temporary pets in our care.
What's Happening This Week END_OF_DOCUMENT_TOKEN_TO_BE_REPLACED