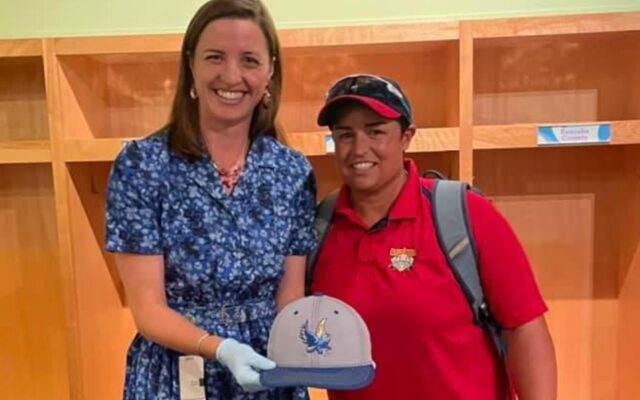 Melissa Lizotte • August 3, 2021
Former UMPI baseball player Ghazaleh "Oz" Sailors returns to the Hall of Fame in July. This time Sailors, a California native, brought her Little League baseball team, the Foster City Vipers, to visit the Hall of Fame and surprise them with their coach's fame.

Like those renowned players, Sailors is featured in the National Baseball Hall of Fame in Cooperstown, New York. While people like Robinson, Mays and Aaron helped pave the way for generations of African American players, Sailors has used her talents to forge a path in professional baseball for women.

In 2015, when Sailors was an UMPI senior and captain of the baseball team, she became the first woman to pitch in a Division I baseball team as part of the National Collegiate Athletic Association.

Not long after that game, the Hall of Fame called UMPI and said that Sailors was the first woman in any male-dominated college sport to serve as team captain. After doing more research, they confirmed what Sailors and her UMPI mentors had already suspected: that her pitch against the University of Maine had made history.

Later that year, the baseball hat Sailors wore during that game, as well as the game’s line-up card and the baseball she pitched, were brought to the Baseball Hall of Fame and have been on display ever since.

“It’s humbling and surreal,” Sailors said. “When I was growing up I wanted to be like Jackie Robinson, so to be in the same Hall as him and all these legends gives me goosebumps.”

Though Sailors saw the display back in 2015, six years had passed before she returned to the Hall of Fame in July. This time Sailors, a California native, brought her Little League baseball team, the Foster City Vipers, to play at Cooperstown Dream Park. She was able to secure a tour at the museum thanks to a friend who now works as a curator.

The sixth grade boys on the Vipers team had no idea that their coach was part of the Hall of Fame until curator Gabrielle Augustine, also a former LG Women’s Cup teammate of Sailors, brought out Sailors’ artifacts. 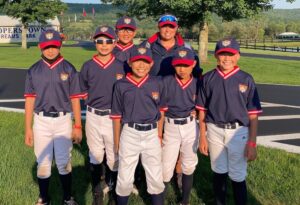 Oz Sailors (back row, right) poses with members of her San Francisco-based Little League team, the Foster City Vipers, while playing at the Cooperstown Dream Park in New York this past July. (Courtesy of Oz Sailors)

“The kids all rushed up to take a photo [with the baseball hat],” Sailors said. “Some of the parents were tearing up and the kids gave me hugs and high fives.”

As her team admired the hat and other artifacts, Sailors told the story of how that UMPI vs. UMaine game landed her the coveted Hall of Fame spot. She also recalled her earlier years in baseball and the discrimination she faced due to being a girl in a mostly male sport.

Prior to attending UMPI, Sailors said, 300 Division 1 baseball teams at colleges and universities had rejected her based on gender rather than performance. Her career path changed in 2011 when Leo Saucier, the baseball coach at that time, invited her to visit the campus.

“I used [the Hall of Fame visit] as a teaching moment for the kids,” Sailors said. “Even if everyone else rejects you, one person who says ‘yes’ could change your whole life.”

For Sailors, being accepted onto UMPI’s team helped propel her into a rewarding career as a professional baseball player and coach.

Since graduating, Sailors has played for both U.S. and international teams such as the Virginia Marlins, the San Rafael Pacifics in California, the Central Coast Marlins in Australia and the Shanghai Buccaneers in China.

She now runs a youth baseball academy in the San Francisco Bay Area and serves as the head baseball coach for Urban High School of San Francisco.

Sailors also sits on the board of Baseball for All, a national girls baseball organization. She hopes that her story and her inclusion in the Hall of Fame inspire young women looking to break into the still male-dominated sport.

“I think it’s easier for women when they can see someone who has already gone through the pressures of breaking down those barriers,” Sailors said. “They can know that their dreams aren’t that far-fetched.”

Next year's Caribou City Council will include a new member and a longtime councilor thanks to Tuesday's election.
Pets END_OF_DOCUMENT_TOKEN_TO_BE_REPLACED

I know many of you have followed DeeDee’s story. DeeDee had leukemia and was under vet care for the past few weeks. Early one recent morning, she lost her battle with leukemia.
What's Happening This Week END_OF_DOCUMENT_TOKEN_TO_BE_REPLACED