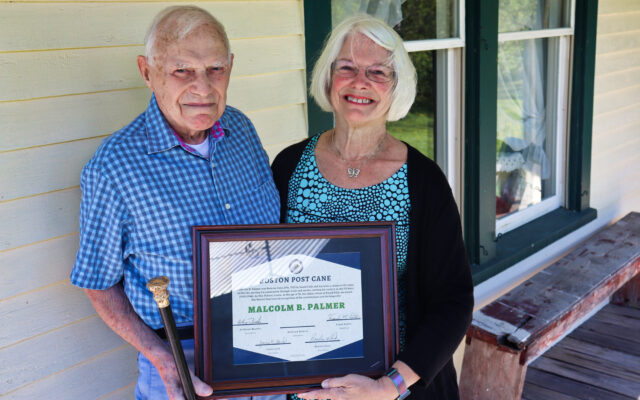 Alexander MacDougall • September 17, 2021
Malcolm Palmer, age 96, was presented with an original commemorative cane certifying him as the town of Island Falls’ oldest resident, in a small ceremony held Friday, Sept. 17, at the Island Falls Historical Society.

ISLAND FALLS, Maine — Malcolm Palmer, age 96, was presented with an original commemorative cane certifying him as the town of Island Falls’ oldest resident, in a small ceremony held Friday, Sept. 17, at the Island Falls Historical Society.

The cane was originally gifted to the town of Island Falls by the Boston Post, a now defunct newspaper, in 1909. It was one of 700 canes given to small towns across New England by Edwin Grozier, the then-publisher of the paper. It was originally meant to be passed down to the oldest male resident of the town, though women were included beginning in 1930.

Some of the Boston Post canes have since been lost or stolen, but Island Falls has continued to pass down its original cane to its residents.

“Not many [towns] still have them,” said Becky Drew, a member of the Island Falls Historical Society. “They just kind of fade into the background and they get given out somewhere and don’t get returned.”

The Island Falls cane had temporarily been misplaced in the 1990s, but was eventually recovered in 2006. The responsibility of the cane then passed to the Historical Society for safekeeping and ensuring that the tradition would continue.

Records of how many people in the town have held the cane are incomplete, but at least 12 residents, including Palmer, have held the honor. Before Palmer, the holder of the cane was John Webb, who held the cane since 2017 before passing away earlier this year at the age of 99.

A veteran of the US Navy during World War II, Palmer has always lived in Island Falls. In accepting the cane, as well as a commemorative plaque, Palmer expressed his pride in being a resident of the small Aroostook County town.

“People are so nice, and it’s a good place to bring up kids,” he said. “Our education is good for what we have. And I guess they’ll probably lay me down somewhere here.”

Asked if he had any advice to pass down to younger generations, Palmer said he didn’t have any.

“I don’t think what advice I have would be interesting to the younger crowd today,” he said. “They seem to have pretty good judgment.”

A familiar face to Aroostook County residents has announced her candidacy for the Maine State Senate.
Pets END_OF_DOCUMENT_TOKEN_TO_BE_REPLACED

One addition to last week’s “Kindness abounds” story on the generosity of local area youth: Just last week, 11-year-old Michaela stopped by the shelter armed with bags of dog and cat food and special treats.
What's Happening This Week END_OF_DOCUMENT_TOKEN_TO_BE_REPLACED