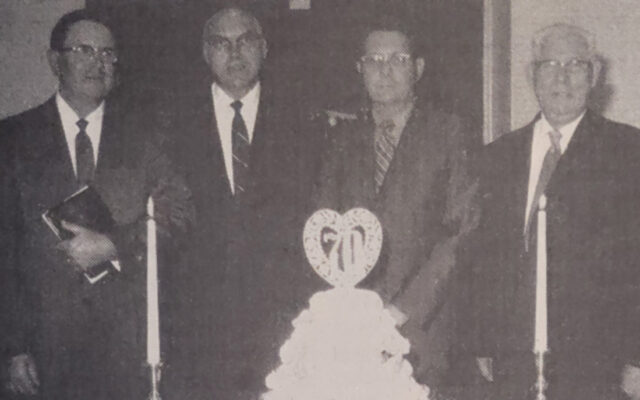 The Presque Isle district was responsible for a quota of five thousand dollars. This area carried out an all out campaign on behalf of our men in service, men still in hospitals and those overseas. The USO campaign was in progress throughout the State of Maine and in the nation. At the request of secretaries of War and Navy USO had been called upon to serve for another year.

Miss Mary Anna West awarded Nurse’s Diploma — At impressive exercises held at the Massachusetts General Hospital School of Nursing in Boston, Oct. 12, Miss Mary Anna West was among the graduates receiving graduation diplomas. Daughter of Mr. and Mrs. Charles F. West of this city, Miss West graduated from the Presque Isle High School in 1941 and attended the University of Maine for one year. In September of 1943, she entered the Massachusetts General Hospital School of Nursing, graduating Feb. 7, 1946. During ehr training period, she enlisted as a Cadet Nurse.

Ashland man decorated — Sergeant Stephen J. Gagnon, son of Mr. and Mrs. Clarence Gagnon of Rt. 1, Ashland, was decorated with the U.S. Air Force Commendation Medal at Loring Air Force Base. Sergeant Gagnon distinguished himself by meritorious service as an aircraft pneudraulic systems specialist in Vietnam. He was at Loring with a unit of the Aerospace Defense Command. The sergeant was a 1967 graduate of Ashland Community High School. Lieutenant Colonel Robert W. Wilson, commander of the 83rd Fighter Interceptor Squadron, made the presentation.

Presque Isle native cited by University — Clinton D. Park of St. Petersburg, Florida, was presented the Distinguished Service Award of the University of Maine at Presque Isle. The award was one of the highest honors offered by the University. UMPI President Stanley F. Salwak made the presentation to Park. A retired educator, Park was born in Presque Isle in 1885 in a farmhouse that once stood where UMPI’s newest dormitory, Park Hall, is located. A residence hall for women, the dormitory was named in honor of Park’s father, the Rev. George M. Park, who was one of the school’s founders in 1903. Clinton Park had followed the growth of the University of Maine at Presque Isle with much interest. Even though he had not visited the campus for several years, he kept abreast of activities through correspondence with President Salwak.

Memorial presentation — A painting of Harry L. MacNeil’s birthplace was presented to Turner Memorial Library of Presque Isle Friday afternoon, Oct. 15. MacNeil, an avid reader, had frequently visited the library until his death. A longtime employee of the Bangor and Aroostook Railroad, some of his many friends commissioned the watercolor by Phil Brockway of Orono. The presentation was made on Friday by Mr. and Mrs. Alan Savage of Seven Spring Street, Houlton, representing the donors and received by Maxwell Bux, representing City Manager Dana Connors; Fred Lunt, chairman of the City Council; Librarian Annie Stimpson; and Library Board of Trustees members, Sylvia Weinberg and the Rev. Jerry Rubino.

Washburn ice rink got a face-lift — In 1996, when Washburn residents laced up their skates, they may have noticed some changes to the town’s ice rink. At their last meeting, Washburn Town Councilors approved Ryan Gahagan’s request to renovate the facility located on Church Street. Gahagan, a Washburn Boy Scout, was pursuing his Eagle Scout award. He had planned on doing this with the troop, painting the exterior of the building, cleaning up around it, and making some major improvements to the rink. Gahagan hoped to complete the project before the rink opened, tentatively scheduled for Thanksgiving.

CTC announced a new partner — Valorie Flewelling joined the staff of CTC of Aroostook as a full-time consultant. She had been providing services to employees of a County business through the Employee Assistance Program. Flewelling had a special interest and experience in working with adolescents and adults suffering with eating disorders, as well as couple and marital therapy. She joined Wanda Anderson and Margaret Rowland to bring a combined 38 years of experience to the business. CTC of Aroostook design and conduct training seminars, provide consultation to the social service, business and education community, and also provide guardian ad litem, assessment and mediation services to the legal community.

For the first time since 2019, there is competition for open seats on the Houlton Town Council
Pets END_OF_DOCUMENT_TOKEN_TO_BE_REPLACED

All of us at the Central Aroostook Humane Society hope that you had a wonderful and safe Thanksgiving holiday.  One change in shelter hours: just for the month of December, we will be closed Thursdays for training purposes.
What's Happening This Week END_OF_DOCUMENT_TOKEN_TO_BE_REPLACED