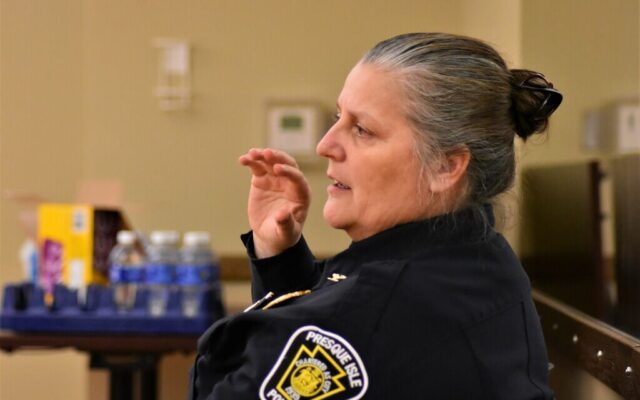 David DiMinno • November 21, 2021
Over the last two years, Presque Isle has had problems retaining police officers, who were drawn to other departments for a variety of reasons, including benefits and location. Thanks to new efforts by the department over the last year, retention is improving.

PRESQUE ISLE, Maine — In May 2019, the Presque Isle Police Department lost seven of its 21 officers to other departments and federal jobs. More than two years later, the department has 16 out of its goal of 20 officers on staff.

Over the last two years, Presque Isle has had problems retaining police officers, who were drawn to other departments for a variety of reasons, including benefits and location. Thanks to new efforts by the department over the last year, retention is improving.

The department has been stuck in a loop of hiring new candidates, giving them the proper training and then losing them to other departments, becoming what Presque Isle Police Chief Laurie Kelly calls “a training ground.”

Chief Kelly began looking at favorable options that would help improve retention. After meeting with the City Council and discussing ideas, all parties agreed to return to the Maine State No Age Retirement Plan, which is a fixed retirement system where people are guaranteed retirement. Several officers had suggested making this change during their exit interviews as they were leaving for other departments.

Within weeks after changing the policy, the department hired four full-time officers who were already certified. Of those four, three are still on staff.

But police departments are incredibly competitive when it comes to hiring officers. Presque Isle has hired pre-certified officers from Houlton. Pre-certified means that the officers still need to attend the Maine Criminal Justice Academy, but after 12 weeks of field training, which acts as an adjustment period upon their return, the officer is fully certified and able to work in every capacity in the field.

Another constant problem has been the time that training takes. The process to become a fully fledged police officer takes roughly a year, with preliminary screenings, the Maine Criminal Justice Academy in Vassalboro (18 weeks), and the field training period (12 weeks). It is within that time that some officers are enticed by other departments, or decide that law enforcement isn’t for them.

“We can tell some people aren’t a good fit by the way they answer situation questions,” Kelly said. We don’t want people who are trying to get into law enforcement to exact their power on everybody. It has to be community service. Otherwise that can lead to all sorts of problems down the road.”

The Police Department has also adopted a take-home car program, which has been one of their key incentives for officers. This allows officers to take a vehicle home, and not have to worry as much about maintenance. The department is also in the process of beginning a lease program, to make this process even easier, and to have enough cars for all officers.

Another incentive allows officers who are already certified to be eligible for a $5,000 bonus.

While Chief Kelly has said that the problem has not been completely solved, things are definitely moving in the right direction.

“I think things are getting better,” Kelly said. I think we are way ahead of where we were in 2018 and 2019. I think we can get where we need to be in the next year or two so long as these folks stay with us.”

For the first time since 2019, there is competition for open seats on the Houlton Town Council
Pets END_OF_DOCUMENT_TOKEN_TO_BE_REPLACED

The mysterious language of cats

The secret language of cats stretches far further than “meow.”  From ear twitches to slow blinks, cats have special ways of communicating that you have to be either a cat expert or a cat owner to understand.