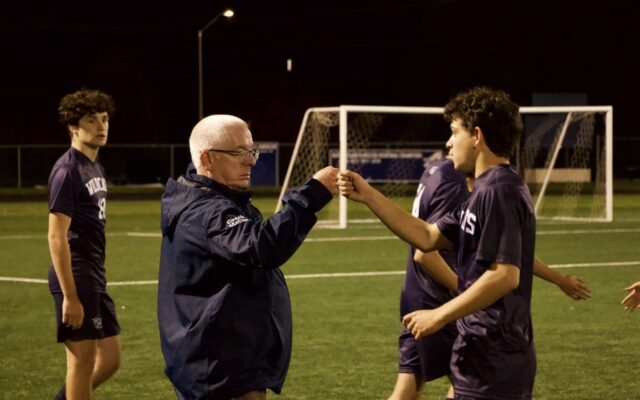 David DiMinno • November 30, 2021
After 3 years as the head coach of Presque Isle’s boys varsity soccer team, Tim McCue has been selected as the Penobscot Valley Conference Class B boys soccer coach of the year.

PRESQUE ISLE, Maine — After 3 years as the head coach of Presque Isle’s boys varsity soccer team, Tim McCue has been selected as the Penobscot Valley Conference Class B boys soccer coach of the year.

McCue has been coaching soccer for the last 18 years. He spent 15 years as an assistant coach, and the last three as the head coach for the Presque Isle boys varsity soccer team. This is the first time he has received this honor in his history of coaching.

This season, the Presque Isle Wildcats held an impressive record of 11-0-1. It was only in the Class D semifinals that the Wildcats were defeated by John Bapst Memorial High School. Even through the tough loss, McCue was always looking for the important lessons to be learned. That game may have ended the season, but it certainly didn’t define it for the Wildcats, McCue said.

“I think what the kids understood, and what we on the coaching staff knew, is that hard work does pay off,” McCue said. “You put in the time and put the effort forward. We had the right group of kids that got into the program, and they really did a solid job all year of pushing forward and pushing through the problems and issues we may have had. In the end, we might not have gotten the results that we wanted, but I am super proud of the effort.”

Coach McCue attributes his success to his players, and to his assistant coach Brian Cronin.

“Cronin is a sensational assistant coach, who is like a brother to me, ” McCue said. “We did this together, and he has been instrumental in getting us to where we are now. We have been friends for a really long time, and have done a lot together with our families. We have very similar thought processes as we go through the season. He sets a game plan extremely well, he is a great mentor, and I knew he would always be prepared.”

McCue also holds very high regard for the leadership of his senior players. His five seniors, Xavier McAtee (GK), Ryllan Thibault (DEF), Jonah Roy (MID), Quinn DeMerchant (MID), Ethan Shaw (DEF), contributed heavily to the leadership of the team, each taking up the mantle of captain for the season. Their experience, enthusiasm, and leadership, will be missed in the seasons to come.

Coach McCue is thankful to past SAD1 Superintendent Gehrig Johnson and current Superintendent Ben Greenlaw, for giving him the opportunity to coach the Varsity boys. He also is thankful for his family, who have been extremely supportive and understanding about the importance of coaching in his life.

“Being selected as coach of the year reflects on my team with the young men that I coach. If I didn’t have quality young men who could follow what we want for protocols, this wouldn’t have happened.

Looking toward the next season, McCue thinks the Wildcats are going to be strong contenders, even with losing five seniors. He is looking forward to working again with such a great group of players.

Forbidden foods for our four-legged friends are many and can be very dangerous if ingested. Sometimes, we give our pets leftovers or what we consider treats. According to many sources, some human foods can make an animal very sick, and in certain cases can even be lethal.
What's Happening This Week END_OF_DOCUMENT_TOKEN_TO_BE_REPLACED