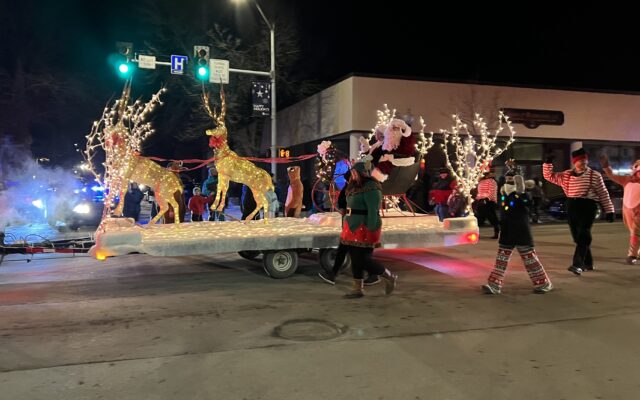 The Central Aroostook Chamber of Commerce hosted the event, which featured 50 sparkling floats and vehicles along with marchers spreading candy and holiday cheer to the hundreds of onlookers lining the sidewalks.

The evening kicked off with a short half-mile fun run hosted by Hub Coffee. Participants began at the University of Maine at Presque Isle and ended at the finish line at Hub Coffee, where they were greeted by smiling faces, hot chocolate and chocolate covered pretzels.

“It was a great run, and the light parade is a great event for the area,” said fun run participant Stacy Shaw. “It’s a win-win.”

The parade began from UMPI at 6 p.m. Floats and cars of all shapes and sizes joined the lineup, with entries from local businesses, community organizations, schools, colleges, churches and more, including Catholic Charities Maine’s Feed the County. 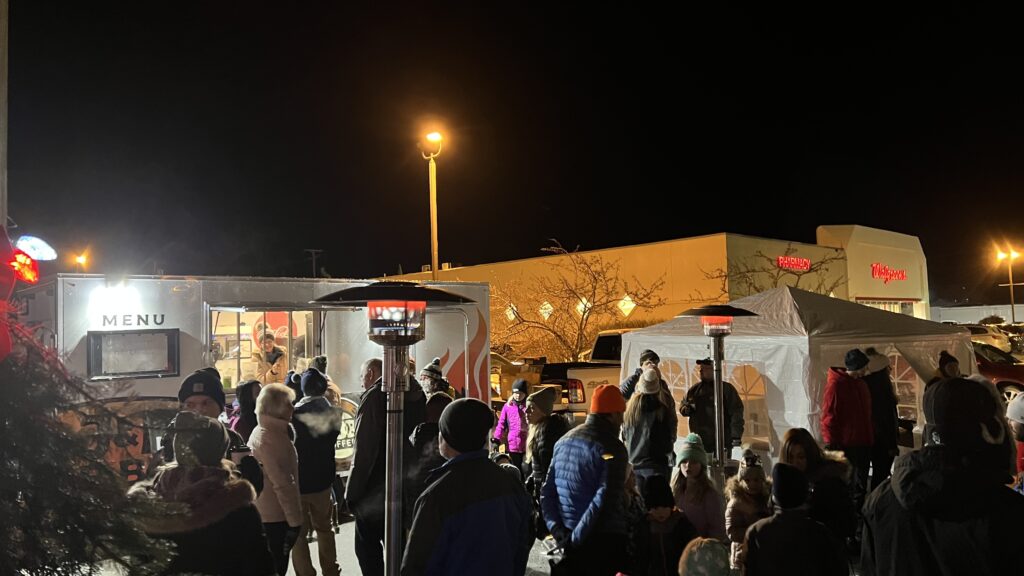 A crowd gathers outside Hub Coffee in Presque Isle Saturday, Dec. 4, after a fun run before the Holiday Light Parade. (David DiMinno | The Star-Herald)

The parade drew crowds not just from Presque Isle, but from neighboring towns, and even around the world.

Kacper Pikula, a Poland native, was in town visiting a friend when he was convinced to check out the parade.

“It was our friend’s idea,” Pikula said. “We heard it’s the most interesting thing to do here right now, so we had to.”

Wind was mild but the chilly temperatures were palpable. Many businesses along Main Street offered free hot chocolate for parade viewers who needed to get out of the cold for a moment.

The parade came to its conclusion with Santa and Mrs. Claus making their annual appearance, spreading holiday cheer and jolly smiles to all that they passed.

For many, the holiday light parade is a source of great family memories.

“I traveled here after all my daughters had gone off to school,” said Stockholm resident Joe Thibodeau. “We used to make it an annual trip. It is good to see everyone in the community out like this.”

The chamber has yet to announce the winners of the parade.

For the first time since 2019, there is competition for open seats on the Houlton Town Council
Pets END_OF_DOCUMENT_TOKEN_TO_BE_REPLACED

We hope everyone enjoyed a wonderful holiday season and is looking forward to the new year.  December was a busy month at the Central Aroostook Humane Society with so many people and businesses bringing in much-needed supplies and monetary donations, which help us to take care of the special temporary pets in our care.
What's Happening This Week END_OF_DOCUMENT_TOKEN_TO_BE_REPLACED