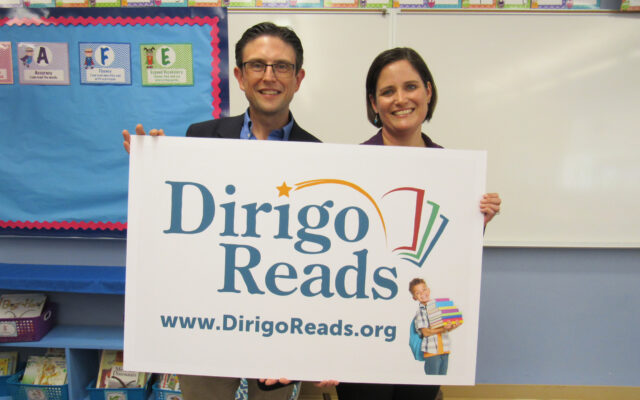 Contributed • January 13, 2022
Dirigo Reads, a program that aims to put a book in the hands of every Maine first grader each month during the school year by 2025, is looking to increase the number of schools that will participate in the program during the next school year.

BANGOR, Maine — Dirigo Reads, a program that aims to put a book in the hands of every Maine first grader each month during the school year by 2025, is looking to increase the number of schools that will participate in the program during the next school year.

Dirigo Reads co-founders Dan and Karen Cashman of Brewer say that new schools are being solicited and considered for the 2022-23 school year now.

“We have received countless notes and letters from students, educators, and parents saying how important the books are that they have received this year through Dirigo Reads,” said Karen Cashman. “The foundation of a love for reading is built around first grade. Expanding this program means expanding the opportunity for more Maine kids to realize their love for reading in their own home.”

Dirigo Reads’ mission is to improve the health and wellbeing of children in Maine through literacy and share a little optimism along the way. This is accomplished by giving first graders in participating schools a brand new book to keep during every month of the school year. Fifty-one schools spread over 13 counties are currently a part of Dirigo Reads. By the time the school year is finished, first graders in each of these communities will have ten new books to add to — or start — their own home library. Over three school years, Dirigo Reads will have distributed more than 26,000 books to first graders in participating schools.

“The partners involved with Dirigo Reads have made this a reality,” said Dan Cashman. “For the books to make their way into the homes of first graders, supportive partners are a necessity. Dirigo Reads partners with a number of businesses who understand the importance of reading.”

There are about 11,600 first graders enrolled in Maine public schools, more than 300 of which contain first grade classrooms. Currently, Dirigo Reads is providing books to about 14 percent of this population.

Schools and businesses interested in being a part of Dirigo Reads should visit www.DirigoReads.org and click on “Contact,” where a form is available to submit all necessary information.

“Dirigo Reads received a tremendous amount of support in its first couple of years,” said Dan Cashman. “But in order for every first grader in Maine to receive a new book every month of the school year, we need to increase the number of partners involved.”

Any organizations interested in partnering with Dirigo Reads, or schools with first grade classes that would like to join the program can find more details at www.DirigoReads.org.

June is generally a month that also marks the height of “kitten season,” when large litters of kittens are born and often end up in animal shelters.   Luckily, here at the Central Aroostook Humane Society, we have seen a dramatic drop in the cat population over the past five years, mostly due to our spay and neuter program.
What's Happening This Week END_OF_DOCUMENT_TOKEN_TO_BE_REPLACED