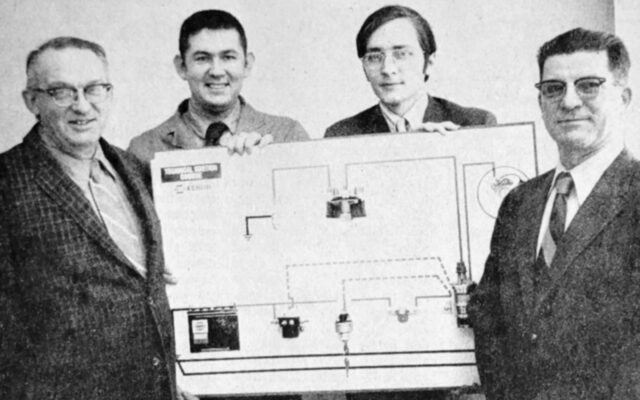 Yvonne Tardie • March 30, 2022
75 Years Ago -   March 27, 1947 Double winner — Captain Freddy Adams of the Presque Isle Wildcats was voted the most valuable player of the Aroostook League current season by the coaches and referees. He was also named to both the All-Aroostook League team named by the coaches-referees combination and The Star-Herald.

Captain Adams was the playmaker of the Wildcats and he never failed to pass to a teammate when that teammate was in a better position to shoot than he was. Adams was a high school senior and the son of Mr. and Mrs. Wallace Adams of this city.

Northern Maine Vocational Technical Institute got Ignition aid — The Building Trades Department of the Northern Maine Vocational Technical Institute held a dinner meeting at the school dining hall for members of the department’s Trade Advisory Board. This advisory board was made up of members of industry who were in a position to advise NMVTI to current trends and needs of specific industries. Present at the meeting were J. Chester Ringdahl and Dick Baird, NMVTI drafting instructors, and their guest, Don Butterfield of Maine Building Systems; Hollis Burgess and Burt Tompkins, Jr., NMVTI building construction instructors and their guest, Don Collins of the S. W. Collins Co.; Jud Libby, NMVTI Electrical Construction instructor and his guests, Herb Sprague, Francis Weeks and Joe Nadeau, all of Maine Public Service Co.

The grand lady — Mrs. Augusta Christie was in the spotlight again Wednesday night, March 22, as the Live Wire Club of the Presque Isle Area Chamber of Commerce honored her with the Community Service Award. Thomas F. Lavin Jr. presented Mrs. Christie the award, noting that her services to the Presque Isle community were too numerous to enumerate.

Wilson was named vice president — Deborah J. Wilson, originally from Mars Hill, and a 1985 business administration graduate of Husson College in Bangor, where she was a valedictorian of her class, was promoted to vice president of Peoples Heritage Bank. She continued to serve as the banking center manager of the Lincoln branch located at the Lincoln Shopping Plaza. She also worked in the areas of personal banking and sales management. Wilson, who joined Peoples Heritage in 1990, had 24 years experience in banking. A resident of Lincoln, Wilson served as the treasurer of the Greater Lincoln Area Chamber of Commerce and chairperson of the March of Dimes WalkAmerica in Lincoln.

Washburn business lauded — Exquisite Homes of Washburn was selected CLR Marcoux’s Distributor of the Year for 1996. CLR Marcoux, a company specializing in quality manufactured homes, presented the award to Vicki Huston, at Marcoux’s annual Distributor’s Meeting held at the Canadian Consulate in Boston, Massachusetts, on Feb 25. Exquisite Homes was selected from a field of both American and Canadian distributors, on a basis of sales performance, operational accuracy, and most importantly, customer satisfaction survey results. Dave and Vicki Huston owned and operated Exquisite Homes, and were the exclusive dealer for the CLR Marcoux in Aroostook County. Their business was based out of Washburn.

A familiar face to Aroostook County residents has announced her candidacy for the Maine State Senate.
Pets END_OF_DOCUMENT_TOKEN_TO_BE_REPLACED

One addition to last week’s “Kindness abounds” story on the generosity of local area youth: Just last week, 11-year-old Michaela stopped by the shelter armed with bags of dog and cat food and special treats.
What's Happening This Week END_OF_DOCUMENT_TOKEN_TO_BE_REPLACED