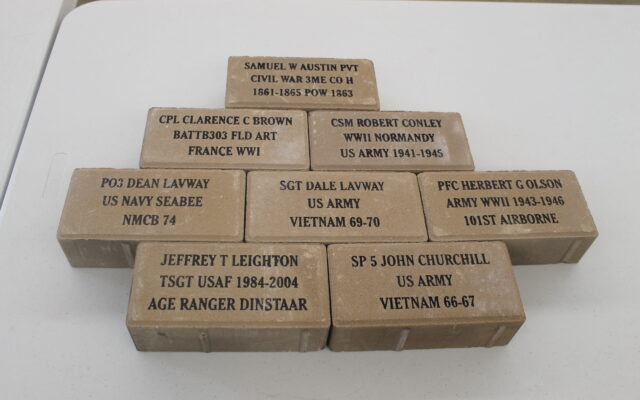 David DiMinno • April 6, 2022
The Washburn Veteran memorial park has undergone several renovations in the last few years, but it soon will have another addition — a brick walkway containing the names of veterans.

WASHBURN, Maine — The Washburn Veteran memorial park has undergone several renovations in the last few years, but it soon will have another addition — a brick walkway containing the names of veterans.

Larry Harrison, who is a retired US Air Force master sergeant, said that many of the local veterans have wanted to do a brick walkway for a couple of years now, but the project couldn’t get off the ground. This year, Harrison was determined to get the project moving.

The Washburn Rotary Club looked at what Fort Fairfield had done for its brick walkway, which is on a much larger scale, and decided to do something similar. Washburn plans to expand the crushed rock area at the park and place the bricks there, Harrison said. There will also be a directory on site so that residents visiting the park can find specific veterans.

Each brick is 4 by 8 inches and has three lines of text including the veteran’s name, rank, branch of service and years served. Each brick costs $40. Brick applications can be found at the Washburn town office, as well as on the Washburn Rotary Club and Town of Washburn FaceBook pages.

Currently, the Rotary club has 99 bricks that have been ordered, and that number continues to climb. According to Harrison, the years of duty range greatly, with the earliest being a POW from the American Civil War.

Harrison hopes to have all the bricks laid down by memorial day, with extra bricks being put in place to continue dedicating bricks in the future. During the August festival, the town will have a dedication ceremony for the bricked area. Harrison said there are also plans in place to put up five more 20-foot flagpoles, each with a flag of a different military branch, which is part of Derek Cruz’ eagle scout project.

Harrison said there is no limit to the amount of bricks that can go into the walkway. If the park begins to run out of space, the Rotary Club will find space to make it work.

Gubernatorial candidate John Glowa said that he wants to spur government reform that truly creates a system of, by and for the people when he visited Presque Isle City Hall.
Pets END_OF_DOCUMENT_TOKEN_TO_BE_REPLACED

Many of you have been asking about our super popular “Toast to the Animals” celebration. After several COVID-19 cancellations and not being able to host this great fundraiser, we are finally ready to celebrate the animals once again and help support the Central Aroostook Humane Society.
What's Happening This Week END_OF_DOCUMENT_TOKEN_TO_BE_REPLACED