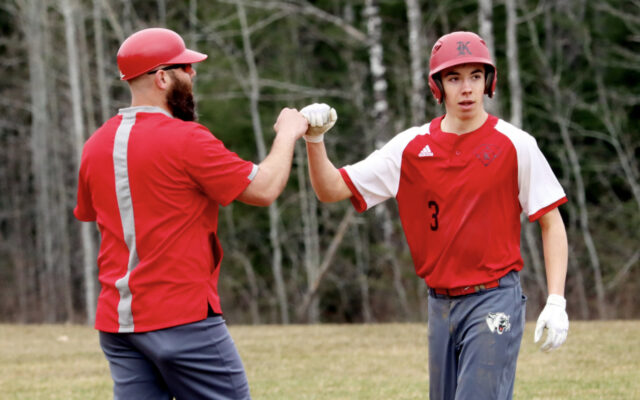 Katahdin baseball readying for next step

Joseph Cyr • April 20, 2022
The Katahdin baseball team enjoyed tremendous regular-season success on the diamond a year ago, but it did not continue into the playoffs for the third straight year.

STACYVILLE, Maine — The Katahdin baseball team enjoyed tremendous regular-season success on the diamond a year ago, but it did not continue into the playoffs for the third straight year.

In each of the last three seasons, the Cougars have been eliminated in the postseason by a mere one run.

That trend is something sixth-year coach Tim Thoreson is looking to remedy this year.

“As we try every year, we hope to challenge each other and ourselves to become the best version of our team we can be,” the coach said. “We are very excited to get our season up and running this year. We have been very fortunate with the weather this year and we were able to be outside by the first week of April. We hope to have a strong regular season and return to making deep runs in the playoffs.”

The Cougars finished  10-4 in the regular season, earning the No. 10 seed in Class D North. Katahdin faced No. 7 Bangor Christian in a preliminary playoff, falling 3-2 to the Patriots.

Pitching, and baserunning should be the two attributes that the Cougars excel at this season.

“Every year, we are diligent as a program to spend a portion of every practice working on baserunning,” the coach said. “We want our young men to not have to think about baserunning while out there, but simply to react to situations. “

The returning pitching staff has a collective Earned Run Average of 2.180, which should bode well for the team this year. In addition, the returning players swiped a total of 118 stolen bases last season.

Hurlbert had an impressive .449 batting average a season ago and collected the most stolen bases on the team (33). Martin was one of the team’s best hitters, sporting a .460 batting average with 22 stolen bases. He also notched 30 strikeouts with a 3.41 earned run average on the mound.

Coach Thoreson said he plans to spend a large percentage of time working on the team’s ability  to put the ball into play and should get stronger in that area as the season progresses.

Katahdin is tentatively slated to open its season Wednesday, April 27, with a 4 p.m. game at Hodgdon.

A familiar face to Aroostook County residents has announced her candidacy for the Maine State Senate.
Pets END_OF_DOCUMENT_TOKEN_TO_BE_REPLACED

One addition to last week’s “Kindness abounds” story on the generosity of local area youth: Just last week, 11-year-old Michaela stopped by the shelter armed with bags of dog and cat food and special treats.
What's Happening This Week END_OF_DOCUMENT_TOKEN_TO_BE_REPLACED