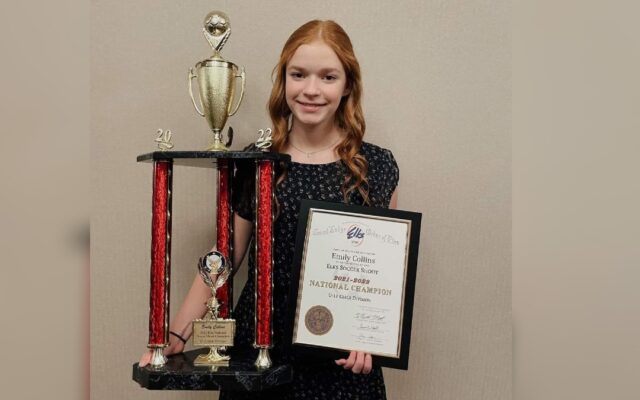 Emily Collins, who is sponsored by Presque Isle Elks Lodge No. 1954, earned the top spot in the U-12 girls division. Her score of 50 points was the highest score in the country in the U-12 Division (10–11-year-olds). Collins edged out her closest competitor, winning by only one point.

Collins and her family were invited to the Maine Elks Association State Convention in Auburn, where she was recognized for the achievement at a banquet held April 30.

To become the National Champion, Collins competed head-to-head against others of her age group at the local, district, state, and regional soccer shoot contests. Her winning score at the regional contest held this past November was compared to the winners of other regions and with the highest score and she was declared the National Champion for the U-12 Girls Division.

This year, tens of thousands of participants competed in the program throughout the country.

Competitors shoot three shots at each goal with points varying from one point for each successful shot at the 48-inch goal to five points each for the 17-inch goal. In the grid-goal contest that Collins competed in, a full-size soccer goal is used. Points are scored based on which area of the grid the ball entered the goal. Points range from one point each at the bottom to five points each in the top corners of the goal. The highest cumulative scores in each contest are declared the winner.

The Soccer Shoot is one of many youth programs supported by the Maine Elks Association and the Benevolent and Protective Order of Elks. Other programs include the Dictionary Project, Antlers, JROTC recognition, Scouting, the Hoop Shoot, an Americanism Essay Contest, Drug Awareness Coloring and Poster Contests, and Scholarships for seniors in high school.

The Maine Elks Association is comprised of 20 Elk Lodges from across the state and has a membership of nearly 11,000 members. The Benevolent and Protective Order of Elks is a fraternal organization that supports not only youth, but veterans, communities, and charities.

Collins is the daughter of Darren and Michelle Collins of Mapleton.

A familiar face to Aroostook County residents has announced her candidacy for the Maine State Senate.
Pets END_OF_DOCUMENT_TOKEN_TO_BE_REPLACED

A big shout out to Carter Cyr of Sinclair. This kind and compassionate 12-year-old boy started his own business in the Long Lake area and donated a portion of his proceeds to the shelter.
What's Happening This Week END_OF_DOCUMENT_TOKEN_TO_BE_REPLACED