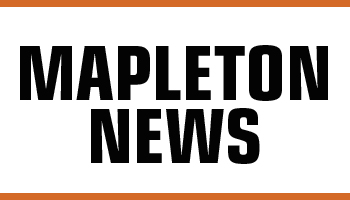 Terry Sandusky, Special to The County • May 20, 2022
The Mapleton Lions Club’s annual spring auction ended May 6.  Lions solicited nearly 200 items for the online event, and auction chair Matt Gregg reported this to be the highest amount raised in the more than 50 annual auctions held by the club.

The Mapleton Lions Club’s annual spring auction ended May 6.  Lions solicited nearly 200 items for the online event, and auction chair Matt Gregg reported this to be the highest amount raised in the more than 50 annual auctions held by the club.

Gregg thanked the many businesses that responded to the solicitations of the club members.  These item and service donations accounted for two/thirds of the funds raised through the auction.

Mapleton Lions Club President Richard Fowler added the club’s appreciation for the many supporters who have made cash donations to the club as part of the auction fundraising.  These cash donations accounted for the other one/third of the funds raised this year. Additional cash donations continue to come in as the club closes 2022 Auction.

Finally, club president Fowler thanked Gregg for the use of his online auction service.

Anyone wishing to be part of the parade is more than welcome to come and join in. 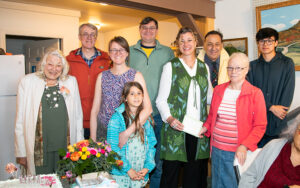 On Mother’s Day, the family of Castle Hill resident Dana Allison hosted a birthday celebration for her as the day was also her 90th birthday. As part of the celebration the family gave a financial gift in honor of Dana to the Haystack historical Society. Pictured here is the presentation being made to Alice Shephard, President of the Society. The Allison family are shown here (left to right) are Dana Allison, Ewen Allison, Harmony Allison, Justin Allison, Piper Allison, Orpheus, Shephard, and grandson Ronan Allison. In front is granddaughter Lyra Yassa. (Courtesy of Terry Sandusky)

Dana Allison, Castle Hill’s Boston Post Cane holder, enjoyed a very special Mother’s Day and birthday on May 8, when she turned 90 years of age.  To honor her, the Allison family held an open house celebration for her at the Haystack Historical Society Museum.

Dana and her late husband, Horace, a pediatrician, moved to Castle Hill 46 years ago looking for land for their animals in The County.  They had three sons and two daughters before her husband’s untimely death.

Allison has been a community-minded resident who served 25 years as a director on the SAD 1 school board.  She also served as a moderator at town meeting around 40 years ago.  In addition to her civic volunteering, Dana continues as an active member of the Haystack Historical Society.

The museum was crowded with family, neighbors and friends who came to celebrate her birthday and to wish her happy Mother’s Day.  Among the family present were her two daughters, Harmony and Piper, and her three sons, Justin, Ewen and Orpheus, along with two of her grandchildren – Lyra Yassa and Ronan Allison.

Several school board members who served with Allison on the MSAD 1 School Board dropped in, and personal longtime friends came to visit, while others who came enjoyed renewing their childhood friendships with her and her children.

Following the singing of “Happy Birthday,” the Allison family called up Alice Shephard, current Haystack Historical Society president, and presented a $500 gift to the society in honor of their mother.  Shephard reminded everyone of the importance Allison was in the start of the society and its museum.

The birthday cake was cut and shared by everyone.  The museum continued to enjoy the sounds of happiness and sharing of good times from the past.

The celebration was the third happy event for Allison this spring.  On March 15 she received the Castle Hill Boston Post Cane for becoming the oldest resident of Castle Hill.  Secondly, in April she exhibited several of her special quilts at the Aroostook Agency on Aging.

Recently we took in a cat named Joe. He is a very sweet cat with a multitude of problems. He was rescued from the streets here in town, but Joe turned out to be a very sick kitty and was surrendered to The Ark because the resources were not there to help him.
What's Happening This Week END_OF_DOCUMENT_TOKEN_TO_BE_REPLACED